Use the above links or scroll down see all to the PlayStation 2 cheats we have available for Naruto: Ultimate Ninja 2. 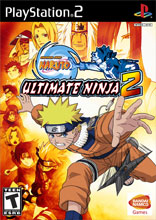 To make your fight easier when you're using Kabuto, use the feather Illusion Jutsu. When your opponent is on asleep, use the Chakra Dissection Blade and decrease their speed. Then you can enter Ultimate Mode and take an easy win.

To use Sasuke's Sharingan during battle, use the Level 2 Technique, but don't complete the whole thing, stop after Sasuke uses the big shuriken. This will unlock his Sharingan and you'll be able to use all of the enemy's attacks except for a few fighters. You can also unlock the Sharingan by using his third level technique, but once again, don't finish it or you'll bring out the curse mark.

Keep using her first technique and her third technique.

Standing on the very top of the fish on the lefts tail while the wind is blowing causes an item to pop out of its eye.

Battling 2 characters against each other 3 times allows them to be each other's support character. Like Naruto + Jiraiya, Sasuke + Orochimaru, Sakura + Tsunade and so on. Also Battling Naruto against himself 3 times allows Iruka to support every other character.

Go to Naruto's house, then on the cheat page put in Fire - Horse - Rooster - Horse.

To get ninja info card 74 you must go to fire and enter dog, boar, snake.

All Figures And All Videos

Go to Naruto's House, and press input password, then press the Wind Symbol, then press Dog, Monkey, Ram. You should now have Fiery Duo's Challenge added to the S-Rank missions.

At the character selection screen, Hold R1 for five seconds and press x.

Go to Naruto's house, and select input passwords. Select thunder, and enter snake,rat and then dragon. If you enter it correct it should say in big letters, OK, and down below it says you correctly entered the password. Press X and you should see "you have unlocked all the characters".

Go to fire and type in Ram, Ram, Ram

To unlock Byakugan Hinata, you have to first beat all of the stories [beat Gedo Mark 2] then beat Lee in the push up contest [find Lee in the chunin exam stadium] then exit the stadium and Hiasha Huga will be standing outside. He will ask you to have Hinata fight Neji. Go to the training field and Hinata will be standing by a training tree. Talk to her then go back to the stadium and talk to Hinata again and beat Neji to unlock Byakugan Hinata.

Successfully complete story 4 to unlock him.

Defeat Haku with Sasuke Uchiha in story 4 to unlock Haku.

We have no easter eggs for Naruto: Ultimate Ninja 2 yet. If you have any unlockables please submit them.

We have no glitches for Naruto: Ultimate Ninja 2 yet. If you have any unlockables please submit them.