Use the above links or scroll down see all to the PlayStation 2 cheats we have available for Naruto: Ultimate Ninja. 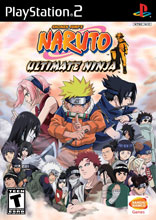 To change your characters clothes you must press L1 and R1 when you chose your player.

When you are in on the ground after being knocked in the air when your opponent gets to sweep attack you, have left analog stick up then when he attacks press x then attack.

Anytime you use curse mark sasuke in battle his health will constantly drain itself.

To change your characters outfits, press and hold R1+L2 to change their costumes.

Curse-marked Sasuke's skills are basically the same as normal Sasuke, but they pack a much more powerful punch, and their title has changed to a more dark title, except for Fire Style: Phoenix Flower Jutsu and Fire Style: Fireball Jutsu, and he only has one Secret Technique, and that is the Curse Mark.

This cheat may take some time, but it is worth it. All you have to do is keep on using Shuriken (DO NOT USE CURSE-MARKED SASUKE, or you will lose), but don't get below your opponents health, and you will win when the time is up.

Keep doing the first, second and third technique for the last.

Keep doing the third technique and the second technique.

At the ending press L1+R1 and it will show a funny ending.

Keep on using the third technique and the second technique.

Get Items And No Blanks At The Shop

This starts in the end of the D-rank missions. All you have to do is when you hit them away press circle and the directional button towards them. It will never be up or down, only right and left.

While playing in Versus mode, hold Square while the fighter's names are spoken (for example, Naruto vs. Sasuke). Continue holding Square through the intermission sequence to fight with the Chibi version of the characters.

At the character selection screen, hold L1 + R1 while choosing a character. In Free Battle or Mission mode, hold L2 + R1 and press X while selecting a character.

Achieve the rank of "Anbu".

Achieve the rank of "Chunnin".

Attack the fish on the left 3 times.

Stand on the tail of the right fish statue until the scroll appears.

Destroy 8 objects flying within the tornado.

Keep attacking the vending machine until the scroll shows up.

Jump repeatedly on the tree to the left.

Run through the tunnel from the left entrance and exit the right. Repeat 3 times.

Jump from the top of the frog to the snake, then jump back.

Wait 3 seconds on the game clock while standing on the boat.

Wait 3 seconds on the game clock while standing on the balcony.

Hit the lanterns so each of them grows red.

The EASIEST way to obtain scrolls is in "Free Battle" if two players battle eachother ten times. Once that happens, press the SQUARE button on the character selecet screen. This places you in the "Makeout Paradise" Menu Screen. Then it will let you know which scroll you've obtained.

To use substitutionin the air press o and the directional pad the direction your opponent is. To use it in the ground you have to block before they hit you. To block press L2 or R2.

Beat all other Sagas

How To Earn Orochimaru

Beat story mode with every one to earn him.

You must complete all of the Chunin Missions to unlock this Sasuke character after he was bitten.

First unlock the Neji Saga then complete it and you will have Neji.

Complete all of the Genin missions.

Complete all of the Ninja Acadamy Student missions.

Complete all of the Chunin missions.

Complete all of the Jonin missions.

We have no unlockables for Naruto: Ultimate Ninja yet. If you have any unlockables please submit them.

We have no easter eggs for Naruto: Ultimate Ninja yet. If you have any unlockables please submit them.

We have no glitches for Naruto: Ultimate Ninja yet. If you have any unlockables please submit them.

Naruto: Ultimate Ninja Guide to All

The Guide of Them All