Use the above links or scroll down see all to the PlayStation 2 cheats we have available for Naruto: Uzumaki Chronicles 2. 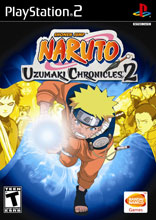 How To Beat The Kankuro Boss

If you have beat naruto uzumaki chronicles 2 and you have bought almost every skill chip start a new game on the cleared game data and get to the south forest to fight call in naruto and do shadow clone jutsu 5 times to have a squad of narutos then do sexy jutsu while your clones are fighting to do harem jutsu while kankuro is dazed turn to shikamaru and do shadow posesion jutsu and press o to throw the trap kunais into the air and if you have the spirit gauge full use the nine-talied fox to kill him.

How To Beat The Bosses On Chapter 9

Are you struggling to beat the Bosses on Chapter 9? This is how : first I'm going to start out with Naruto Summon Shadow Clones. Keep on summoning wave after wave until the bee falls to the ground. Then use True Rasengan on the bee. Now Kankuro Use Wild Shot on the bees a few times. It should fall down. Use Wild Dance on it. Now Gaara Use Sand Wall on them. Sometimes it will miss. Keep doing it until it falls down. Use either Sand Coffin or Sand Drizzle to do a lot of damage. Watch out for the "bomb bee" if it gets close to you summon some Shadow Clones if you're Naruto. Also there are the bombs that roll toward you. Either jump back, move forward or go to the side before they explode. You WILL have to use items and switch characters.

Hidden Room In The Machine Fort

In one of the rooms with all the gears in them in the corner the is like an entire wing of the fort sealed off its part of the wall so you have to blast your way though but once you find it you will get all kinds of useful items.

When your inside the shirogane clan's hideout when you past this bridge you find neji and someone else. And you don't team up with him yet but. Go on to the other bridge and you see choji then he says stop by him if you ever run out of items, well when you go up to him press square, and you can shop.

During two play battle, pick itachi. Then in battle when your friend has lock on you hold down R1 and R2. Note:it uses alot of chakra but takes off half oppenents health. P. S . :when your sasuke if you want to kill someone in two shots in two player battle go up to someone and hold R1 and R2.

When he uses monkegyo sharingan, take you target off him, and when hes in a gaze, attack him!

How To Dodge Itachi's Monkegyo Sharingan

When itachi does monkegyo sharingan take target off him, then when hes in a gaze hurry up and attack him!

When you are doing kakashi gaiden the best person to beat both Kisame and Itachi is Gai. When facing Itachi you should switch to Gai and use either his primary lotus or his leaf hurricane. Unless very skilled with kakashi try using his sharingan when ever they are about to attack. To avoid Itachi's mangekyou sharingan lock off the opponent and wait. This will pout Itachi in a daze and attack while he is weak. Try to defeat Itachi first he is the biggest threat. After defeating Itachi you can avoid all of kisame's attacks and win the game. You then get both of them as a reward. You can only use the team in 2p battle though.

Beat all survival tasks with naruto.

Complete all survival missions with naruto.

How To Unlock Kakashi's Saga!

To unlock kakashi's saga you have to beat all the missions in the main menu. If you are having troubles doing so you can look up a walk though at you tube to help. Thank you!

This skill chip will increase tai-nin-and wep by 30. You get this when you first beat the game in story mode.

While fighting get behind an enemy and press Square, Triangle, Square. You will do Kakashi's 1000 years of pain.

Beat all 46 missions (Note: some might only be able to be played after beating certain chapters or beating the game).

We have no easter eggs for Naruto: Uzumaki Chronicles 2 yet. If you have any unlockables please submit them.

We have no glitches for Naruto: Uzumaki Chronicles 2 yet. If you have any unlockables please submit them.

tips on how to use ninjutsu