Use the above links or scroll down see all to the PlayStation 2 cheats we have available for Naruto: Uzumaki Chronicles. 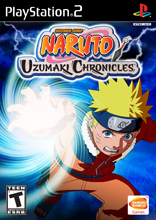 Use the Shadow Clone Jutsu (suggested you power it as much as you can) and quickly use the Sexy Jutsu and all the shadow clones will turn into girls and you will have just used the herem jutsu. Note: The Herem Jutsu is more powerful than the Sexy Jutsu.

When going against Choji the first time use dash to get out of the human boulders attack then use shadow clones to keep him busy. After that use a rasengan right away. Do that about 10 times to win.

How To Defeat Orochimaru

Defeat orochimaru with naruto and use the ninetailed fox chraka and keep using the rasengan and shadow clone jutsu.

How To Defeat Sasuke On Lone Pine Hill Easily

To defeat sasuke easily use the nine-tailed fox naruto the first time then you will not have to fight him a second time.

After you collect all the charms you will have to face Neji. When you do you have to keep your distance. Neji will use his 8 trigrams 64 palms when ever he gets the chance. Use Naruto's Shadow clone jutsu to increase kyuubi gauge. Use rations and what ever else he has.

When facing Gaara on top of the castle he will raise sand pillers if go to far away from him. If you stay close and use the substitution jutsu and use Naruto's taijutsu and kyuubi release when ever possible. Shikamaru's Shadow Possesion jutsu is useless against gaara so don't waste your time on doing that. This will help against other foes you will face too so don't forget.

To Heal about 25% of your chakra, When you are at the loading screen, rotate both analogue sticks in any direction as fast as you possibly can. The konohara mark should be rotating faster, and the sphere with the text"now loading" should be expanding. Eventully, a blue orb will pop out of it. This action should automaticlly heal some of your chakra.

You noticed there are four directions (left-up- down-right) because its a genjutsu so the secret is you look at the gates shadow if you see the shadow that is pointing left.

We have no cheats or codes for Naruto: Uzumaki Chronicles yet. If you have any unlockables please submit them.

Beat the game once.

To unlock all the boss battles, beat the game once. This feature allows you to go to a certain dot on the map(marked green) and intiate in a boss battle.(they arent random)

How To Use Nine Tailed Naruto

To unlock nine tailed naruto you have to use up all of naruto chackra or fight alot.

We have no easter eggs for Naruto: Uzumaki Chronicles yet. If you have any unlockables please submit them.

We have no glitches for Naruto: Uzumaki Chronicles yet. If you have any unlockables please submit them.