Use the above links or scroll down see all to the GameCube cheats we have available for NCAA Football 2003. 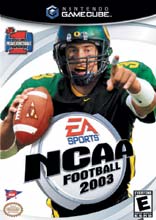 Get Created Players During Dynasty

At the end of every season in Dynasty, just after the last bowl game, save the game. Then, go to create a prospect. Make your prospect as desired, then save the game again. Then, go into players leaving. Note: You can skip this option if desired. Go to scouting. Go directly to the 100 blue chips in the country list, and see if your prospect made your team his first option. If not, back out all the way to the beginning, load the game, and try again. You will usually get three to four different outcomes. Keep doing this throughout the week you advance and you are still one or two on his list. Make sure you save the game -- sometimes they will pick the last person on their list, or if your team is already stacked, they will go to your rival with the weakest link in their position.

Go to the settings menu and then turn the length of the quarters to one minute. On average for most teams, it takes more than one minute to drive down the field. If you get the ball first, go ahead and score. Just hold the team you are playing. If you do not get the ball first, hold your opponent or let them score. Then when you score, go for two. The simple iso in goalline always works. Since the game will take no more than ten minutes, you can get several trophies in an hour. Go to the settings menu and set it to overtime. Just stop the other team, win in overtime, and you will get the trophy. Change the game clock to one minute. Set the game on easy play. Kick an onside kick, put the arrow to the ground and to your side, kick as weak as possible, then recover. Do this after drives so you never have to play defense. An easy way to win trophies is to set the game on overtime and junior varsity. All you have to do is hold the opposing team and score a field goal or touchdown and you will win the trophy. Save your profile to keep the trophy in your showcase.

The following team names will be recognized and announced if placed in the "Nickname" slot in the create a school option: <

Announce Names Instead Of Numbers

If you would like to hear the announcers call out your teams names rather than their numbers, all you have to do is put their roster in. Go to the options screen, go to "Edit Rosters" and insert the names under "Player Info". After you insert them, play a game and your team's names will be announced.

Make sure that your kicker can at least make it to the endzone on kickoff. Then, go to the settings section and change all the penalties to off. When you kick it off, kick the ball at maximum power, let the bar go, and press it again. You should kick it to the left of the endzone out of bounds inside the ten yard line. Where it goes out of bounds at is the location where the other team will start at.

Get The Ball Possession Back

Enter the game settings screen and turn penalties off. Play a game. When you kick off to the other team, do an onside kick. When you kick it, quickly jump on the ball. Note: This may take some practice.

Create numerous profiles and get your five pennants at the beginning. Then, risk your pennants against the other controller. Set the game to overtime and no wind, and kick a FG with the profile you want to win the pennants. When the other team gets the ball, punt and its all over.

If you throw the ball to one of your receivers repeatedly, the defense will start double teaming that player, making it nearly impossible to throw to him. When they start playing extra defense on him, go to the depth chart and switch him to a different receiving position. For example, if he was the first string, put him at second; if he was second string, put him at first. He will still be in the plays, but on the other side of the field with one single man coverage, so you can keep running up the score. Repeat this again if they start the coverage.

Select Punt Middle as your play, then take your three middle lineman and bring them in front and on each side of your returner (or get as close as possible). The other team's offense will block men that are not there, and you will have three extra blockers.

Get Ball On Kickoff

Use the following trick to get you the ball 95% of the time on kickoff. Set the game to easy play with penalties off, then choose the onside kick. Move the kick off arrow all the way left and down. You will hardly kick the ball -- only get the power to the end of the yellow line (it is acceptable if it goes slightly past), then hit the button again and try to get it in the yellow. When playing a human player, call for Kickoff Left/Right then, which ever you choose, set to kick the ball in that direction. However, make it go as far up as possible. After the ball is kicked your team will run to where the ball will land. If you play the CPU, they will almost always call for a fair catch. The ball does not have to touch anyone on the return team. You can run up and catch it (if the kick is powerful enough).

Earning Campus Challenge Credits And Running Up Your Score/stats

Create your own juggernaut school/team. Edit the roster so your team is filled with studs. Enter season mode with your team and under the preseason options, schedule as many 1-AA teams as possible. Set your playing time for 15 minutes and enjoy the ride. If you have the unlimited time-out cheat, you can use it here and stop the clock after any play finishes in- bounds. This will give you more time to compile stats. Note: Doing this may increase your game time to over 90 minutes (and possibly 120) of "real-time". If you are going to use the time- out cheat, take a 15-minute break when you hit the half time point of your game. Also, note that campus challenge points are awarded based on your level of play. Heisman is the hardest level, but you also get increased value on your campus challenge credits.

Select "Rosters" in the options menu, then "Edit Player". Select their ratings icon and you can change every column up to 99.

Go to the rosters and select any created or a regular team. Select the players. This will give you a list of selections. Select ratings, and from there you can pump up your player. You can also select the appearance and make him tall and big. It may take awhile, but you could pump up your entire team. This requires patience. Choose practice mode to try the team.

Cause Fumble On Kickoffs

To to make your opponent fumble the ball on kickoffs, keep kicking to the same player. Eventually he will fatigue and start fumbling the ball in the third and fourth quarters. You can also kick to the other side of the field and try to surprise the other receiver. If you catch him off guard, he will sometimes fumble.

At the main menu, go to features, and then rosters. If you feel that a player is over/underrated, select that player and press A. A menu should appear just like in create-a-player. Use the attributes option to change the ratings of that player.

ND Green Jerseys [and Others]

Choose your team [ND or others]. Then at the next screen press X and a screen will appear with a player, under it will say Home and there will be arrows. Arrow to either side until you find the jersey you want.

We have no unlockables for NCAA Football 2003 yet. If you have any unlockables please submit them.

We have no easter eggs for NCAA Football 2003 yet. If you have any unlockables please submit them.

We have no glitches for NCAA Football 2003 yet. If you have any unlockables please submit them.

We have no guides or FAQs for NCAA Football 2003 yet. If you have any unlockables please submit them.

Submit a cheat for NCAA Football 2003