Use the above links or scroll down see all to the GameCube cheats we have available for Need for Speed: Hot Pursuit 2. 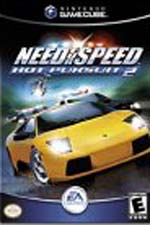 Get 3.5 million points to unlock the NFS edition of the Porsche Carrera GT

Get Rid Of Police Helicopters

Find a divided road. Shortcuts work perfectly. When the helicopter is in front of you, it will follow the main road. It will not switch roads after it is on one. Go on the other road, and the helicopter will be gone.

Get The Police Off Your Tail

If you have one or two police chasing you, swerve around things such as incomming traffic, trees, poles, or any other immobilized objects. The police may not see it and crash into it. This gives you an advantage to lose them. If you are way ahead of the pack and do not feel like having a police on your tail, if your radar derector detects an incoming radar (no police), zoom on the road in front or you. See where the police are parked, and slam into the back of the car. It will be a Hit & Run, but the police car will be dead. You will not even get a yellow star.

Extra Points In Be The Cop Mode

Start you're The Cop mode in Single player under the beginner difficulty setting. Select either the Crown Victoria or the BMW Z5 (the opponents are eisier to catch). Then, go to National Forest and catch the fourth and third cars. On the last two, hit the third one to make him lose control, then arrest the first place car. Immediately catch the second player that you forced to lose control to minimize the time to around 138, if done quickly enough. The procedure is quick but easy, giving you over 25,000 points if you throw in a couple of jumps. Then, restart and do it again.

Get 4.5 million points to unlock the NFS edition of the Mercedes CLK GTR

Get 2.5 million points to unlock the NFS edition of the Lamborghini Diablo

When you are driving, be aware of the shadowed bar below the rearview mirror. It will start to climb with green and then red as you close in on a cop. If a cop is already chasing you and has issued a roadblock, watch the bar. If the strip started with yellow, it indicates that a road block is approaching.

If you drive backwards on any track you will not see any police.

There will be two objectives you will have to do to unlock two kinds of cars. These two involve clean racing. For a clean race, avoid hitting any object that inflicts damage on your car, such as hitting another car, a wall, etc. Hitting road signs, going offroad, or landing very hard on big jumps are excluded since those do not do any damage.

This trick is tough to pull off and will require some practice before using it in a race. Get to at least 80 mph. Press the Analog-stick backwards at an angle in the direction that you want to turn, so it is inverting your slide. As soon as you begin to turn, slam and hold the brakes. Force the Analog-stick sequentially around in an extreme circle. Release your brakes when you are about 75% through your turn. Slam your accelerator, and power yourself through the rest of the turn. At the end, it is recommended that you bank the car for a moment, because you do not want the it to fly out of control.

If you have the Rear Mirror option on, you should see a meter (radar detection meter) at the bottom of it. If you do not see this meter, it indicates that there are no police in the current race. If you happen to see that meter at the bottom of your rear view mirror, be aware as there are law enforcers on that course.

On the upper-right corner of the screen are four star shadows. Each time you break a law or do something bad, you will get a yellow star. For example, a hit-and-run is two stars. If you get four yellow stars, you should beware of roadblocks, including the choppers.

Turn the "Speech" option on high in the "Audio" screen when the police are on your tail, especially when police may be present on the race course. Be aware that the police may say something about roadblocks and where they are, as well as what they may try to do to end your speeding frenzy.

All of your opponents can be scared. If your opponents are directly besides you, suddenly steer towards them, as if you were trying to ram their car off the road. They will panic and veer away from your sudden move. If you are lucky, they may veer away too much, thus causing them to crash into an object, slowing them down. You can also do this to police that are on your tail. Another way to slow down opponents is to get behind their car and ram it 180 degrees from the bottom left or right of it. Note: This can also be done to cops.

The McFarland F1 LM is not as fast as the regular McFarland F1. Also, the NFS versions of the cars are not faster than their regular versions, but cost more.

Go into race or go to the showcase. In the race, switch to the near view; in the showcase zoom into the car from behind. The license plate will read "ND 4 SPD" (Need For Speed).

If you see a police car ahead, ram it to get him to chase you. Lose the police car and you will get extra points for a hit-and-run. Look for the dirt road shortcuts to lose the police and get ahead of other drivers. Also, choose to be the police in Hot Pursuit mode. You will get 25,000 points each time you complete one mini-mission.

Easy Way To Ditch The Cops

Get side by side with the cop. Then use you're handbrake and turn right to spin out the cop. After you see him start to spin turn right so you don't spin out with him.

Using the handbrake can be very helpful for maneuvering turns such as S-curves and switchbacks. Use the handbrake at the apex of the curve and make sure you keep the nose of the car pointed in the right direction. Be careful, this maneuver can be dificult to perform, and you can lose control of you car fairly easily, but using the handbrake can save you a lot of time on the turns.

We have no cheats or codes for Need for Speed: Hot Pursuit 2 yet. If you have any unlockables please submit them.

We have no unlockables for Need for Speed: Hot Pursuit 2 yet. If you have any unlockables please submit them.

We have no easter eggs for Need for Speed: Hot Pursuit 2 yet. If you have any unlockables please submit them.

At the very bottom left side of Hot Pursuit mode is the German Showdown Tournament. In race 3/4, as soon as the start timer counts down, go backwards to the cement barrer. Go to the right side of the barricade (at the bottom), then press the car reset button (Z). If you were close enough, you should end up on the other side of the barrier. Turn around and go the other way. After you cross the gap on the map, your status will change to first place. Keep driving and you should find a huge unfinished "mountain". Stay at the dead end and you will see your opponents flying through. Some how they have gotten through the blocked off bridge that appears later in the stage. To get out, go to the opposite part of the barrier and press Z. Note: this may require a few attempts.

Choose single player mode, select two people, no cops, and traffic on. Go to the second level that is available from the start. You will find a tunnel. Go out of it. Make sure there is a van near you. Go straight out and you will see a hill- like object. Get player two to ram the van into the hill. When touching the hill, ram the van numerous times. The car will eventually disapear into the "hill". To find it, have the second player ram you into the hill multiple times. You will eventually fade in there as well. You will both end up back in the tunnel.

Submit a cheat for Need for Speed: Hot Pursuit 2