Use the above links or scroll down see all to the PlayStation 2 cheats we have available for NHL 2002. 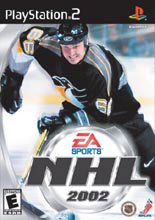 Make Your Created Player Look Like Any Player In The Game

Go to the create-a-player screen and skip the face. Go right to the name and type in the name of any player you want. They will ask you if you want to create a player like him. Say yes. Delete his name then type in yours. Change thecountry, birthday, birthplace, and all that stuf to yours. When you play with your player you will now look like that player.

After playing a season until the All-Star game, finish the game and (regardless of wether you win or lose), the two All-Star teams will be available at the team select menus.

Go to the create a player screen. Skip the face and go right to the name. Type in the name of any player in the game. It will tell you that the player all ready exists. Then they will ask you if you want to create a player like him. Say yes. Then go to there ability bars and fill them to 100. That player will now be pefect.

There are a total of 153 Player Cards available here in NHL 2002. These cards each feature a different NHL player on the front, just like real sports trading cards, and information about the odds of getting the card, the duration that it lasts, its particular boost, and the re-sell value on the back. For each player, there are Bronze, Silver, and Gold versions, with the following attributes:

Just as the name suggests, these NHL Cards will open up Easter Eggs in the game. And just like the Celebration Cards, they are not per use cards and are available once they are earned -- the particular Easter Egg will need to be turned on in the Easter Egg menu if you wish to use it. All of these cards are only available in Diamond.

One of the all-new features in NHL 2002 is the inclusion of user-controlled celebrations after goals. By pressing the corresponding button, either X, Circle or Triangle, the goal scorer will do the celebration that has been mapped to that button. There are six that are available at the beginner of the game and nine others that are opened up once you get one of the NHL Cards. Unlike the Player Cards and the Cheat Cards, these aren't used up once you use them.

Create a player and enter "Steven Page", "Ed Robertson", "Kevin Hearn", "Tyler Stewart", or "Jim Creeggan" as a name to unlock the corresponding band member from the Barenaked Ladies.

We have no easter eggs for NHL 2002 yet. If you have any unlockables please submit them.

We have no glitches for NHL 2002 yet. If you have any unlockables please submit them.

We have no guides or FAQs for NHL 2002 yet. If you have any unlockables please submit them.