Use the above links or scroll down see all to the Xbox cheats we have available for Ninja Gaiden Black. 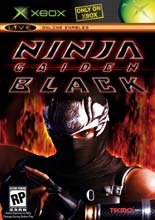 When playing as Ninja Dog every three times you die you are given something if you continue like a rice bundle. Each time you restate over ride your last save. This is a long process but each time you fight her you will learn a little more about how to defeat her and gain health ups that you can use. This helps if you don't have any Ki to preform Nimpo attacks.

When you reache Hans bar, there is a small passage to the left, go in there and when you come to a left swing look up the wall towards you, try to come up over the wall, there you will find the X, it will give you full life and ki. It is hard to come up so you must try a lot of times.

Die three times consecutively in Chapter 1., then accept the choices given to you.

This secret can be found just outside of Han's bar. If you are lucky enough, a hint in the form of a pink Kunai scroll will tell you to look for a special weapon left behind in an alley that "only a Ninja can get to". You can find this "alley" right outside of Han's bar to the left. After defeating the ninjas outside, turn to the alleyway and look up. You will see a series of blue strips throughout the alleyway in which you can use to run back and forth about the alley. Do this, starting with the first strip just outside of the alley, and then jump to the second and finally the third strip, all the while running along the wall. Once you hit the last strip, jump to the ledge right across from it. Here you will find the Windmill Shuriken embedded in the wall, and an "X-box" symbol that I believe either revives your KI energy or your life. Once you've taken the shuriken you can continue on with the mission with a new deadly weapon at your side. Good luck. Doesn't work in hard mode.

On level 13, go to Han's Bar. There should be Fiend soldiers. Use the Vigoorian Flail (needs to be level 2)and only use the Cremator move. You can hit a few enemies at once, and their fire blasts can't hit you while you're hitting enemies. I got a 189-hit combo doing this once, and tons of essence is dropped in this process.

We have no cheats or codes for Ninja Gaiden Black yet. If you have any unlockables please submit them.

We have no unlockables for Ninja Gaiden Black yet. If you have any unlockables please submit them.

We have no easter eggs for Ninja Gaiden Black yet. If you have any unlockables please submit them.

We have no glitches for Ninja Gaiden Black yet. If you have any unlockables please submit them.