Use the above links or scroll down see all to the Wii cheats we have available for No More Heroes. 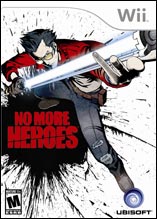 Earning money to pay the UAA's next ranking fee can be a pain, but it's best to get it out of the way quickly, as you can use the rest of your cash to buy upgrades or other amenities, and/or spend some time making more money before you fight.

With that extra money you have, the first things you should spend it on are training sessions at the Thunder Ryu Building. By doing the Bench Press and Squats (at least those, since they're the cheapest), you can extend your maximum amount of health and overall strength

Training before your next Ranking fight is incredibly helpful, as a lot of strength and a lot of health can help you get through the enemy hordes before facing the boss.

Get The Dash Move Asap

Once you gain access to Lovikov's bar, Gold Town, you can start collecting Lovikov Balls and redeem seven of them for new techniques. First on your list should be "Memory of Child," a dash move on the ground activated by the B button. The dash can help you get around town quicker if you're away from the bike, like, say, when you're collecting a bunch of close-together Lovikov Balls.

Once Naomi's Lab opens up, you can purchase the Accelerator, a permanent add-on to the Beam Katanas indicating the locations of every Lovikov Ball on the map (as well as spots where you can dig up hidden money). The Accelerator costs LB$29,800.

Trading Cards are in every Ranking battle area in the game, hidden in treasure chests. Some are easy to spot; others may require you to go off the beaten path slightly.

After performing a finishing strike (when the directional arrow appears), immediately shake the Remote a couple of times. A mess of triangles should appear over the enemy, and the power of Travis' strike will double. With a single enemy, this isn't very helpful, but if you can get a cluster of enemies around the one you're about to finish, you have a chance of killing multiple enemies at once.

When riding on the motorcycle, flick the Remote up to perform a big leap! It's not entirely useful, but it's kinda fun.

When riding the bike, hit the brake at the same time and twist the Remote left or right to slide in place. Good for making tight corners if you miss a turn!

We have no cheats or codes for No More Heroes yet. If you have any unlockables please submit them.

Successfully complete the game, and save when prompted after the credits. You can start a new game session and keep the items obtained during your previous game.

Successfully complete the game. Then, purchase the energy saving part for the Tsubaki MkIII for 999,999 LB from Naomi to get unlimited battery power.

Successfully complete the odd jobs given at the Job Center to unlock the Assassination missions.

Go back to the motel, select your television, and win the Rank 04 battle to unlock the Pure White Giant Glastonbury mini-game.

We have no easter eggs for No More Heroes yet. If you have any unlockables please submit them.

We have no glitches for No More Heroes yet. If you have any unlockables please submit them.

We have no guides or FAQs for No More Heroes yet. If you have any unlockables please submit them.

Submit a cheat for No More Heroes