Use the above links or scroll down see all to the Xbox cheats we have available for Oddworld: Stranger's Wrath. 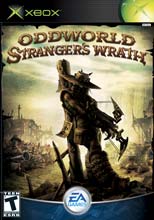 Stand on the air chutes so you keep bouncing up and down. Have the Zappfly equipped. Whenever Elboze tries to attack you, he will not be able to because he cannot go through the air chute. Whenever he gets close and you are up above, shoot the Zappfly to his tender spot on the back. You can wear down his energy until he is knocked out.

In order to defeat Secto, you must go through two of his spider pets. Shoot them with Sting Bees and Bombats. If they get too close, hit them with Riot Slugs until they disappear and run away. If they catch you in their whirlwind attack, just aim and shoot until they run away. After you defeat them, you must fight Secto. When fighting him, hide behind the big rocks until he shoots you with his giant laser. After the rock breaks, shoot one of the two power generators at the bottom of him. They have blinking lights on them. Shoot them until one of the blinking lights gets broken off, then run and find another rock to hide behind. You must do this about ten times. If you need more ammunition, there is plenty around. Just wait until after he breaks your rock, get some, then hide again. After you destroy all of the blinking lights on his power generators, he will die.

Look in wooden boxes that are smaller and look more secure and barrels. Start looking right after the elevator. You can get a few hundred before you get to X'plosives himself. When you do be sure to take out his helpers first or you will be overwhelmed by all the men firing at you. Take out the snipers first, a zap bug to the fuel containers next to each of them will work. Then hit a track switch and kill the machine gunners in a similar manner. Then hit a track switch. Kill the reinforcements that come from behind a large door and knock out the fire cannon in there. Hit the last track switch and avoid the machine gun by running into the room where you destroyed the fire cannon. Dodge behind the stack of containers and use thud slugs, zap flies, and boom bats to knock him out for full bounty. More moolah in the tunnell on the way out.

After you capture Lootin Duke. He has a rope that goes to a platform up behind his hideout at the water facility. Climb the rope over to the second rope and walk across the pipe into the tall pipe complex there. Look on the platforms and shelves and find lots of Moolah chests. Gather all you find and take the bounty back to town.

When he goes to the switch to pull the platform out from under you shoot him in his back (Which is missing his armor) with zap bugs and thud slugs. When the platform pulls back and you fall just back up and run into the air blast and back on the platform you just left. Repeat about 6 times and he will fall unconcious and you can get full bounty for him.

To beat Luken Duke bring out your thudslugs and sparkz. Use your thudslugs to knock him down and then shoot him with one of your sparkz at him when he starts to puke. Then capture him alive for twice the value.

Note: This requires two controllers. During game play in first shooter mode, insert a controler into port (2) then remove it without doing anything else. You will hear a biong sound. Next, immediately press X(2), Y(2), B(2), A(2) on controller one to enable cheat mode. Another Boing sound will confirm correct code entry.

First you need to have "cheat mode" enabled. then press X, Y, A, B, X, Y. Then the health gauge will turn yellow to confirm that you entered it correctly.

We have no unlockables for Oddworld: Stranger's Wrath yet. If you have any unlockables please submit them.

We have no easter eggs for Oddworld: Stranger's Wrath yet. If you have any unlockables please submit them.

We have no glitches for Oddworld: Stranger's Wrath yet. If you have any unlockables please submit them.

We have no guides or FAQs for Oddworld: Stranger's Wrath yet. If you have any unlockables please submit them.