Use the above links or scroll down see all to the Xbox 360 cheats we have available for Overlord. 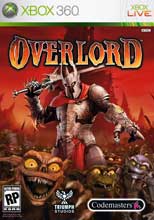 Easy Way To Get Minions

A good way to get your minions back when the numbers are low is to go into the dungeon and fight any kind of beetle and if you do this you get around 80 minions!!

If your tired of following the Overlord and not seeing an attack from behind then theres a simple solution. Just click on the right stick and you will be above him. And if you hold down the Left Bumper(LB) and move the right stick you will move around him.

Target-lock onto Rollie, and start to circle him while he prepares attacks. After he attacks, you should be able to get directly behind him while he pauses and circle up to his side. Stand against the tank treads on his side, and start hacking away at him. He will not move or try to attack you. You can defeat him in each phase of the battle this way, and it requires no minions.

Always have blue minions on guard duty. While on a guard post, they will actively run into the combat, grab a fallen peer, and drag their half conscious form over to you so they can revive their fallen comrade. However, while not assigned, they will wait for you to micromanage them over to the body by sweeping, making them almost useless in a large battle.

Forge a piece of gear without imbuing anything into it. Then, upgrade it and put as many minions into it as desired. As soon as the animation starts, but before any minions jump into the smelter, pause the game, save, and exit. When you return, the minions will have been imbued, but will not have been taken from your supply.

Once you get your Blue Minions, you need to get the object near Spree out of the water (it's a minion bonus.) If you wait until much later, it will be too late!

To keep all of your minions instead of throwing them into the smelter, the second you hit the word "Forge", hit start and then Exit game, when you load your game you will have the Upgraded piece of armor and not have lost any minions. Side Note: You must put at least two types of minions in each piece of armor to Achieve the Ultimate armor Achievment.

We have no cheats or codes for Overlord yet. If you have any unlockables please submit them.

We have no easter eggs for Overlord yet. If you have any unlockables please submit them.

We have no glitches for Overlord yet. If you have any unlockables please submit them.

We have no guides or FAQs for Overlord yet. If you have any unlockables please submit them.

We have no achievements or trophies for Overlord yet. If you have any unlockables please submit them.

Submit a cheat for Overlord