Use the above links or scroll down see all to the Xbox 360 cheats we have available for Perfect Dark Zero. 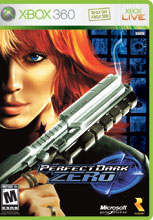 On the second mission, when you are about to ride the elevator, don't go on it. When facing the elevator, turn around, there should be a vent. Crouch and melee it (B button) and it should break. Then you will see a Frag Grenade. Be aware though, the explosive radious is very high and dangerous, so when you chuck the grenade, be careful to be out of the blasting radious. Its about fifteen feet. Also, you have more than one grenade.

FAC-16 And Goggles On Mission 9

When your done defending the dropship, go behind the ship and crouch. There should be the goggles in the water. But there are two places for them, ones behind the ship, and the other one is in front of the ship. Face the front of the ship, then stand as close as you can to it. Then move backwards until it notifies that you have picked them up. If you are in front of the dropship and facing it, turn left until you see a box that is shut. (But its a rectangular box not a wooden crate). Use your locktupus to unlock it and you will have the FAC-16.

Good Protection In Desert On Multiplayer

This is good for Capture the Flag. If you are the first team (The one closest to the truck and demo kit point) the easiest thing to do while wait for your teamates to get the flag back, is to crouch down and get under the truck. It is best to be in between the wheels where you are even less likely to get hit. This will give you good protection from bullets and some protection from explosions. Also the truck cannot be destroyed. The reason why this works so well is that the computer players are too stupid to crawl up under the truck and shoot you. But your allies would probably take care of them anyway. But, if you get killed, you have to get your flag back quickly, you alliest are too stupid to crawl under the truck too, and after about 30 seconds, the flag returns to the enemy base.

Note: This trick requires a Locktopus. To the right of the bridge are stairs. Go up until you reach the top. Then, go up to the ladder and pick the lock. This will give you a great sniping location, and you can bypass the enemies.

Once one player has gotten a weapon that another desires, go to Club:Stakeout on Agent. Drop that player's weapon to a second player. Have any one of those players continue through the level normally. If done correctly, the new player could have the weapons in less than three minutes. The faster way through the level is to run in the club after the first objective is complete unarmed, and rush to the very top to Jack Dark.

In a capture the flag game, have one player get the flag and bring it back to his base to score. Before he scores, have the party leader go to the enemy base and stand on the enemy flag holder (the colored circle under where the flag starts). Stand over it in a position so that he can see the color on every part inside of the circle. Once he is positioned, score the flag and stay there. Every time you score it should say "Enemy flag returned" at the bottom. After that, the flag will come back out as though you dropped it before you made it to the scoring spot. If you stand there, the flag will score very quickly, but you will not be able to tell until the round is over and it shows the scores. If the player on the enemy flag holder dies or moves too far away for any reason, the flag will come back to the enemy base.

Have a Hawk and one of the two vehicles. Throw the Hawk and get on the vehicle. While driving around, hold the RB and the secondary function of the Hawk will activate. Usually the Hawk's secondary function will protect you from explosions and have a white lined barrier appear around you. However this glitch will only provide the visual effect and will not protect you. This does not work on the gunner position of the hovercraft.

If you have a plasma gun or rocket launcher, get on the gunner position on a hovercraft and press Y once to swap it with the M60. You will now have unlimited ammunition for whichever you choose to put on the hovercraft. This trick can also be used to get a free M60 on a level that does not normally have one.

At the Desert multi-player map, there is an area where you can take cover and see through the wall. In order to do this, you must have Bases 2 and 4 open. Go into the cave temple base. Once you go through the hall, go up the sand hill, and not the stairs. Go in the little courtyard from either entrance then turn left. There should be a bowl near the wall. Stand as close to the wall and as far in as you can into the wedge created. While standing, go into cover. If done correctly, you should be able to see through the wall. This is most effective during the Infection game type with the Plasma Rifle. Hide there and whenever you see a skeleton, use the secondary function (invisibility). They will usually walk out because it is very difficult to see you.

While in cover mode and standing, move the crosshairs up to the very top then over towards you. You will be able to see more of what is on the other side of the cover that you could not see before.

The Temple level has a similar design to the final level in GoldenEye 007 (also a Rare game) on the Nintendo 64.

When you are creating a deathmatch game with bots, look at the names of some of the bots. There are references to other Rare games. For example, "BOT-GRUNTILDA" is the witch from Banjo-Kazooie.

Pick up a plasma gun then get into the hovercraft's turret. While shooting the turret, press Y as fast as possible. If done correctly, you will have a fast shooting plasma turret.

At the beginning before or after you kill the two brothers, there are four lockers on the right wall of the side of the bridge that you start at. If you are looking directly across the bridge and turn 90 degrees, there should be four lockers on the wall. In one of them is a pair of X-ray goggles. Note: If you look around in the wooden crates on the side that you started on, there should be a new weapon called the Hawk. It is a disk that you can throw and slice people with.

Before the mission, select the demolition kit from the weapons menu. During the mission, after you kill the two brothers go across the bridge towards the rocket. When you get to the rocket, take a left and go down that road. When you get to the end of the road, there should be two doors (one on the left and another on the right). If you try to open them, they will say "secured." If you go on to a ramp that is on the right side of the left door, there will be a crack in the wall. Use the demolition kit to blow up the crack to get into the door.

Get to the second level of the stage. When you enter the corridor that has the two traps, instead of continuing past the traps, turn around and enter the door behind you. Inside there should be two guards. On a crate near one of the guards should be the X-ray goggles.

Go to the front of the base. Go to the left and go up the stairs. Then, turn left again and take another set of stairs. You will walk through a small maze of walls, but will reach the same point. When you are outside, go next to the tires. Make sure you have a Jakal, as other guns are not as precise. Aim at the main road and wait for an enemy. Most people do not know that a sniper will be looking for them and you can easily take them out with head shots. This spot is also good because on your left from the road, you have a view of another main road used in the level. If u are playing against more than six players, do not use this spot. Snipers from the other side will be posted and you can get killed from behind if your base is overrun.

Defeating The Final Boss In Mission 13

When the final Boss jumps to the platform you are standing on, he will lunge at you with his sword. Right before he swings it, dive out of the way. If done correctly, he will trip and fall. Quickly grab his sword from the ground next to him before he gets up and start attacking him with it. Note: The sword can be used to hit three consecutive times by quickly pressing RT(3). If he manages to get away, he will summon his sword back to him. After this happens, just wait for him to jump back onto your platform and repeat the process. In the Mansion Infiltration mission, there is a room you must go through that is full of guard wires. In the middle of the room is a sword. If you take the sword and keep it for the rest of the mission, you will be able to bring it to any of the other missions. In the last mission, bring it with you. Press LB to dodge the final Boss' attack and let him fall over. Before he gets up rapidly press RT. This will only need to be done once or twice. Take your time shooting him. Concentrate on dodging while he is shooting energy balls or throwing pillars at you. Bring a weapon with a silencer so that you can shoot him while he is trying to heal himself with people so he will drop them. Silenced weapons have the best aim -- you will only need to shoot once.

We have no cheats or codes for Perfect Dark Zero yet. If you have any unlockables please submit them.

We have no unlockables for Perfect Dark Zero yet. If you have any unlockables please submit them.

We have no easter eggs for Perfect Dark Zero yet. If you have any unlockables please submit them.

We have no glitches for Perfect Dark Zero yet. If you have any unlockables please submit them.

We have no guides or FAQs for Perfect Dark Zero yet. If you have any unlockables please submit them.

We have no achievements or trophies for Perfect Dark Zero yet. If you have any unlockables please submit them.