Use the above links or scroll down see all to the Xbox 360 cheats we have available for Peter Jackson's King Kong. 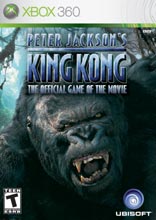 In this level, you will come to a cave entrance with spiders surrounding a tree stump to the left. Ignore it for now, but this is the location of one lever. After you defeat the Raptors (kill them with flaming spears), light a spear on fire and burn the brush to the left of the gate while facing it. This will unveil the second lever. Grab a spear or bone, stab a dragon fly, then go back through the cave where the spiders were. Throw the bait to the right so the spiders leave the tree stump and you can obtain the other lever.

The very first time you fight the V-Rexes, there is a ledge which you can climb onto so they cannot attack. However, once you are up there, you will be attacked by the flying dinosaurs. They are not hard to defeat. When you are up there, go into Fury mode by repeatedly tapping Y until Kong smacks the ground. While in Fury mode, attack the V-Rexes one at a time. After you have hit one of them three times with A, they will be temporarily knocked out. You can then perform a finishing move by repeatedly tapping B or A. If done correctly, Kong will snap the V-Rex's jaw in two or throw it.

It is not possible to kill T. Rexes when you are a human. The only exception is the smaller version of a Rex in The Cave mission. Other than that, all your guns and spears can do is distract the T. Rex to come after you instead of your comrades. In most missions you must have the T. Rex come after you so that your comrades can open a door or complete an objective of some sort. Do not waste all your ammunition on a T. Rex. A few rounds of fire should be enough to distract it.

Successfully complete the game to unlock the artwork gallery.

To unlock cheat menu, at the menu screen, hold LT+RB+RT+LB, and press Down, Up, Y, X, Down, Down, Y, Y. That opens the cheat menu. Now enter one of these case sensitive passwords.

We have no unlockables for Peter Jackson's King Kong yet. If you have any unlockables please submit them.

We have no easter eggs for Peter Jackson's King Kong yet. If you have any unlockables please submit them.

We have no glitches for Peter Jackson's King Kong yet. If you have any unlockables please submit them.

We have no guides or FAQs for Peter Jackson's King Kong yet. If you have any unlockables please submit them.

We have no achievements or trophies for Peter Jackson's King Kong yet. If you have any unlockables please submit them.