Use the above links or scroll down see all to the Xbox cheats we have available for Phantom Crash. 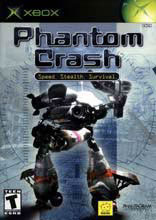 Try to save around 800,000 NY (new yen, not New York, sorry, bad comedy) by day 42. On that day, go to the AS American Stars SV shop. The SV in the middle will be bright yellow instead of the usual olive drab color. Buy two of these. If you only have one hangar buy one, go to your hangar, dismantle it, then go buy another. In the hangar put one of these huge gun arms on the left and right arm slots. You won't really be able to use any back weapons, and you will have to be careful in your choice of optional parts. -The T23 - SV - ATC 's weigh 1.510 t apiece. -You will need to buy either the Aeron four-leg or hover-leg modules to carry these things. (I recommend the hover legs since they are MUCH faster and have decent durability). -Modify the leg module in the heavy direction until it can carry the load. The parts list is as follows Body- Aeron Body - normal, no modifications Legs- ""Hover Legs - Heavy level 12 to 15 ARM Right - T-23-SV-ATC - normal ARM Left - T-23-SV-ATC - normal Option -OCGVB -OCGIIIA -Multi Accellerator color and chip of your choice This is pretty close to the bare minimum of what's needed to make this work. You should have a fairly fast and deadly SV. The arm cannons have a limited range and low muzzle velocity, but they do tremendous damage and produce the largest blast effect in the game. (try firing them in tandem into a crowd) You also get 45 shots in each arm. Keep expeimenting and have fun!

If you like to realy annoy your opponents, then try this Photon SV.

chip and color of your choice.

Ever been destroyed because it took too long for your SV to start running? Here is a little trick to help remedy that. (of couse this on works when you are "rumbling") When you start to move, click down on the left analog stick to make your SV run immediately. This is most helpful if you jump a lot. Also you can center the vertical axis of your HUD by clicking down on the right anlog stick.

There are special SV's with the special weapons I talked about. On Day 12 go to American Stars, Kojima Heavy Industry, or Ventuno Gruppo areas and you will see new SV's with special weapons, this is a special day offer only, its good to save your money if you've played through the first 60 days :).

If you are a laser kind of person and don't know about the laser arm thing, start reading! when day 18 comes around go to the store that sells holy robots. youll want to have about 500,000 NY and an empty garage. then buy it, take the arm off of it and if you want just sell the pieces you don't want. if you want 2 arms like that, just save 1,000,000 NY and have 2 garages open. simple right?

On Day 55 look out for a special rumble that only has drones as opponents. You can beat the crap out of everybody since there all drones... even the boss (the one with the pink health bar) is really weak. He is a pest though but don't underestimate it. I suggest doing this on a weekend when you have plenty time. Then just play and play and stay alive as long as you can while racking up a lot of NY. I mean alot... dude I'm telling you, this Special Rumble racks up a lot of NY. I actually got over 2,000,000 NY playing this Special Rumble (about an hour and a half). Be greedy because the money you win isn't enough to fully customize your SV the way you want, especially if you want to uplift your chips and customize parts.

Highlight any location icon on the map. Rotate the right thumbstick and it will add 100 credits. This can be done for up to 1,000 credits a day.

In any arena (except the "Arena"[trial mode]) you can blow up barrels, cars, trucks and buses. This code was submitted before, but the person who submitted it didn't realize that cars and trucks can be exploded twice. Shoot once, wait for the flames to stop, and shoot again. Gain lots o' cash! Barrels usually are worth 3000 NY.

Go to Ampland. If you have enough money you can select and preview sample music. If you like what you hear you can buy it. Next go back to your hangar and go to music. Then select the program and then select which songs you want for that program. You can name the program too to keep track of what is on the program.

To get more SV's in Versus mode, go to your saved game. Then go to the menu under system and select Keep SV. Then Select the SV you want to save so you can play with it in Versus. If your full up on space, you can delete SV's from the Versus that you put in there.

Do you have trouble winning in vs or on quest because your enemy keeps getting health? To get rid of the dropship that drops these health boxes is get in a high spot near a drop area and when it comes by to drop items shoot it.{ I'm not sure if you can destroy it with missiles I've only done it once with a machine gun}

There are special weapons which appear on certain days. There are two for each type of model (Aeron, Kojima, HOLY).

Some small ramps and obstacles in the center of Shinjuku catapult you miles above the arena if you just drive onto them. Look for boards leaning against small boxes. I found this accidentally and was surprised to be launched above the arena where I could see dropships/Scoobees/ammo, armour and money pickups.

Buy a regular Photon body. After buying this buy ph-2-legs (the regular Photon legs) and upgrade them to level 20. Now buy a light Photon heavy sniper rifle and make sure it is fairly light. You should now buy a photon melee arm weapon, I think it is called a curse or at least nick- named the curse in the description, and make this fairly light too. Finally buy the photon back weapon called the bazooka. Go to the hangar and assemble the body and legs. Put the bazooka on the right side of the back. The "curse" on the right arm and the sniper rifle on the left. Now give it a kotubuki dragon paint job and voila! You now have an S.V. just like Screw! NOTE: It doesn't matter what option parts you give it or what chip it has, but to be really realistic I suggest a Cat 2 chip. Name the chip, Time.

The recommended SV is a Holy normal body, Heavy Hover Legs (level 60 to 80), two Gatling Guns at level 99 light, one normal Javelin Laser Beam, an Hourglass, 10 mm armor and an OCGVB (optic camouflage). The two Gatling Guns will have 3000 ammo. Fire them both at the same time and it will dish out a lot of damage in a short time. Note: For maximum speed for the Gatlings Guns, start one then start the other shortly after. If you hear a somewhat high pitched shooting, then it will be very fast.

Recommended Scoobie For All Bosses

The recommended Scoobie is a Holy with two Javelin Laser Beams. Note: These are not the shoulder ones, They are the arm ones that can be obtained from the "special Mechs" that appear on the days that are a multiple of six from Ventuno. Also equip a Heavy Heavy (try to max it out), Hover Legs, and 30 mm armor. Also, a Light Light body (about 35 light) and a Heavy Heavy (maxed out for damage)Slingshot in case the Boss turns invisible. Wait until you have a clear shot at the Boss. Use one arm until it is depleted then switch to the other arm. This should take them out. If not, wait until they recharge then do it again.

The easiest way to keep your money and not have to repair, is to go back into a gate (such as the one you enter from). If it does not open, bump into it and it will then open.

Use Laser During The Charge Time

When you are using a laser, you normally have to wait for it to be fully recharged. However, you can use the laser during the recharge time. When you are firing the laser, release the trigger, then press the trigger again as quickly as possible. If done correctly, you will have started a new laser beam. This lets you charge your laser slightly, allowing you to use it longer. Note: You can repeat this as many times as possible.

In the first arena, just run around in a circle, getting any power-ups that manage to pop up. There are side garages you can "pull into" to let your Optical Camouflage recharge. In the second arena, drop into the large circular hole and wait for power-ups, killing enemies that appear. In the third area, start on the gate to the right. Then, hide behind the area where you start.

Go to the first stage on rumble (the city) and climb onto roofs for a good camping location, if you get high enough. Make sure you have a slingshot to shoot from the roof.

In the second stage underground, there is a large round room with a ramp that spirals down the wall. At the bottom end of this ramp is a nice location to camp out underneath. Even better, an ammo, health, and New Yen drop point is directly in front of you when you hide here.

Jump onto the "high rise" in front of you when you first enter the level. Jump up there and walk around to the left, then look around. You should see a passageway for you to pass through. Go into it halfway. This is a good location to let O.C. recharge or wait.
Start at the right gate. Immediately after you exit the gate, jump on top of the place that displays the screen of your Scoobies. Hide behind the screen. You can hit anything on your side from that place, and also use the screen as a shield. Occasionally you will also see the yellow ship that drops off things. You can destroy it for 10000 Neo Yen each.

On Day 55, you will have a chance to only fight drones for 3,000 to 4,000 Neo Yen each. It is possible to make well over 3 million Neo Yen through those fights. Also at the town map screen, place the little "snowboarder" pointer over the garage area. Rotate the Right Analog-stick ten times in any direction to gain 1,000 Neo Yen. Note: You can only do this once per day.

We have no unlockables for Phantom Crash yet. If you have any unlockables please submit them.

We have no easter eggs for Phantom Crash yet. If you have any unlockables please submit them.

We have no glitches for Phantom Crash yet. If you have any unlockables please submit them.

We have no guides or FAQs for Phantom Crash yet. If you have any unlockables please submit them.

Submit a cheat for Phantom Crash