Use the above links or scroll down see all to the PlayStation 2 cheats we have available for Playboy: The Mansion. 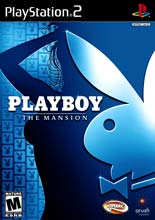 Talk to Melda Carlton when she shows up with the "nerds" in "When everything's going right". Get her to pose for a cover. When you print that issue, her friend Petra Verkaik will want to pose for you and gets you 4 points.

There are a ton of things to unlock in Playboy: The Mansion, based on your various actions. This is the complete list of what to get and how to get it in Mission Mode. The requirements are different for Freeform Mode, but all items are still attainable no matter which mode you are playing.

To increase the Charm of people, have them follow you to a mirror and tell them to "Use". Repeat this several times.

Have your Playmate follow you to a piece of sports equipment. Tell them to "Use". Repeat this several times. Eventually they will have a high Physique. This also works on everyone in the game.

Allows you to edit the name and appearance of all fictional staff members and celebrities. Note that ratings, specialties, and occupations cannot be edited. You also cannot edit anything about storyline people in Mission Mode, such as Scotty Powers or Ki Kji. Unlocked after completing Mission 2.

When you have a playmate do a centerfold. After you publish them, they can do an essay, cover shoot, or an interview. It is good to be their friend before publishing your magazine.

Get your journalist to follow you. Take them up to a bookshelf and tell them to "Use". Repeat this many times. Eventually you will have increase their Intelligence. This also works with everyone in the game. Just like how you can raise your photographers and writers intellect by making them follow you and telling them to use bookshelves, you can also do for Hef. His intelligence will also rise, but it sometimes will not work for the different bookshelves.

If you take a picture of a girl while she is winking (so that the picture has one eye closed), it will boost your photoshoot. Variety is the key to a great photoshoot. Get pics both on and off the bet, couch, or prop. Get some clothed and some topless. Get objects in as many pictures as possible. Get as many winks and raised eyebrows as possible. Also, fit them in the picture both close and far off.

To get girls to French kiss go to game menu and hit cheats and type in girls go wild.

Enter "classic" at the code screen.

Have girls naked without censurs enter "mesohorny" at the code menu.

Have girls get naked with no censors "mesohorny" at code menu.

We have no unlockables for Playboy: The Mansion yet. If you have any unlockables please submit them.

We have no easter eggs for Playboy: The Mansion yet. If you have any unlockables please submit them.

We have no glitches for Playboy: The Mansion yet. If you have any unlockables please submit them.

Submit a cheat for Playboy: The Mansion