Use the above links or scroll down see all to the GameCube cheats we have available for Pokemon Colosseum. 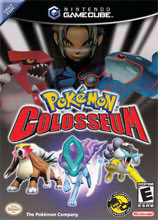 To get Jurachi, load him into the Game Boy Advance from the bonus disc. Then, transfer him to Pokemon Colosseum.

Unlimited Of Any Pokeball Including The Masterball

The way you do this is when your in battle you pick the pokeball you want to use with your first pokemon. Now with your second pokemon you go to items and you click on the pokeball you used with the x button on the controller and switch its place in the bag with another type of pokeball. Then after you switch its place the game acts like you never used a pokeball. So you can have unlimited of them but you have to do this every time you use a pokeball.

To snag Togetic, you must first snag all 47 other shadow pokemon in the game and watch 2 TV broadcasts about pokemon attacking people. When you do, you'll receive a strange e-mail telling you to go to the Outskirt Stand. A shady guy that looks exactly like you awaits, holding onto the last shadow pokemon in the game. Since his Togetic is nearly 50 levels below his other pokemon, snagging it is quite tricky. The most crucial step is taking out the Gyarados since it knows earthquake and kill kill Togetic in one shot. Put him to sleep or use the quick claw and hit him with an electric attack (from Ampharos or Raikou) to hopefully deliver a one-hit KO. When Togetic hits the field, poison or paralyze him, then throw out pretty much any type of pokeball for an easy snag.

Choosing Your Starter In Phenac City

You know how when you try and leave Phenac city, there are weird guys standing at each exit. Well that determines who your starter will be. At the left exit ( the one by the mayor's house) will be green and have a Bayleef. The one at the right on the opposite side of town will be red and have Quilava. The third guy at the entrance of the city (where you first came in and got your sidekick), will be blue and have a Croconaw.
In my oppinion the Grass type, Bayleef is the best choice. The other grass pokemon aren't that good and the one that is good can't be used until after you beat the game. I didn't even use it in the final battle but it will come in handy on Mt. Battle when you have to face about 20 Ground type pokemon that can be beaten by a Quagsire and Bayleef combo or Maganium if your bayleef evolved already.
I think Croconaw is the worst choice because Their are 5 other water types in the game including Suicune, which is a very good pokemon and a rare legendary pokemon.
Fire is okay but still you can catch an Entei which is equivelent to Suicune except fire type and not a water type. And there are other good fire types like a Slugma which can be evolved and a Houndoom which can be evolved.
This is just a heads up. You can catch Entei Scuicune and Raikou in this game and they can also be called the Legendary Dogs or the 3 Legendary dogs. Of Pokemon just like Articuno Zapdos and Moltres can be called the Legendary Birds or 3 Legendary Birds of Pokemon.

In Agate Village, at the first house you see to your left, go around the hose on the left side and keep going around until you go offscreen. In the cave, there are two chests that give you stuff.

In Agate Village, if you take the hill down from the pokecenter, and go south and turn at the edge and keep going, you'llrun into a chest that gives you something.

If the three DNA samples you are given are Entei, Suicune, and Raikou or Croconaw, Suicune, and Sudowoodo, go through the door and press and hold the L, R, Z buttons while entering. This will make it easier to catch Tyranitar later in the game by possibly giving you a second chance at battling the Cipher President.

No Need For Awakenings!

Instead of wasting your money on awakenings, you can just call your pokemon for them to wake up!

Here are all the cities you visit in the Orre region.

In order to instantly make a Shadow Pokemon's heart to open you need an extremely rare item called the Time Flute. I know of at least three places where you can get a Time Flute. One from Vander at Mt. Battle after you drive off Dakim. One from using the U-Disk in The Under. And one to the far right of the platform you start out on when you reach the 100th trainer at Mt. Battle. You can only use a Time Flute in front of the relic in Agate Village. (Make sure to save one for really strong pokemon.)

Snag and purify all Shadow Pokémon (DO NOT USE TIME FLUTE!) and beat the level 100 mode in Mt. Battle using your Pokémon from story mode.

Catching Raikou isn't as hard as catching the other legendary pokemon. When you battle him you should paralize it instead of putting it to sleep (that's how I did it). First try using ultra balls then if you run out of them, or they don't work, use timer balls. If you faint him don't worry you can catch him again soon.

How To Get Entei

You must battle hard and smart to get Entei. To find him you must go to Mt. Battle and go thourgh the men. Then you will see a tall buff guy in white cloths. he has four other pokemon than Entei. They are Golom, and three others that I can't remember, but they are mainly weak against water abd grass. The main pokemon that I used were Bayleaf, Noctowl who Earthquake doesn't affect, Quigsire, and the two pokemon you start out with Unbreon and Espeon. You must hurt Entei to near fainting then if you can put it to sleep and try to catchit if you can't put it to sleep just catch it. I found that a premire ball works best aganst it.

The Real Way To Get Makuhita

there is another guy in this section who talks about Makuhita. He forgot something. The first step is to talk to the mayor in Phenac city. Then u go to Phenac Stadium. Talk to the person behind the desk there. to get to phenac stadium, go up all the stairs, there will be a guy with a jiglypuff. go into the entrance. anyway, after u talk to the person behind the desk, go outside again. a bunch of thugs will challenge u. beat them. then go to the poke mart and talk to either the man sitting down upstairs or the woman in the back of the first floor. then go back to the outskirt stand. buy pokeballs from the bartender. buy a few because u might need more than 1, buy great balls if u want a easier catch. go back to phenac and to the mayor's house. the second person will have a pokemon u can steal.

How To Get Suicune

First you must have fought off the to (Chippers I think they were called) both of them are female and in purple and they will come at you back to back. Once you defeat them you need to run along the side of the gate they were watching intill Sliva sees you then he will give you a R-Disk that will lead you to the office were Lady Venus is at. Don't forget to look around first because there are rare candies that will raise the level of one pokemon buy 1 there are three. Once done looking aroud talk to Venus and the battle begins. If you haven't noticed she atracts attention and so do her pokemon so be prepared. Most of her pokemon are weak aganist Fire so slug ma and if you snagged him and purified him Entei. Her pokemon are Bannet(ues bite),Steelix, Skitty, Vileplume, and Suicune. Like Entei Suicune won't go easy you have to get its HP near zero to five. The best ball to use is the Timer ball if there as been more than 6-8 turns, if not Ultra Ball.

We have no cheats or codes for Pokemon Colosseum yet. If you have any unlockables please submit them.

We have no unlockables for Pokemon Colosseum yet. If you have any unlockables please submit them.

We have no easter eggs for Pokemon Colosseum yet. If you have any unlockables please submit them.

We have no glitches for Pokemon Colosseum yet. If you have any unlockables please submit them.

Created by: ZERO wing of Power. Read the full guide...

Were to find every pokemon!

Where to get every pokemon 2.0

Submit a cheat for Pokemon Colosseum