Use the above links or scroll down see all to the Game Boy Advance cheats we have available for Pokemon: FireRed. 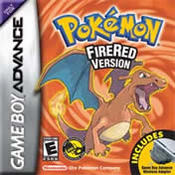 Go to CERULEAN CITY then go up to the house with the backyard and go to the top flowers the last one and hit A or with the VisualBoyAdvance Z.

There is a shiny Onix on victory road. It looks golden.

You must have the National Dex to do this. Go to Five Island and head to Resort Gorgeous. There are 2 Ladies there, Lady Gillian and another one whose name escapes me. The one lady has a Lv. 48 Hoppip and a Lv. 50 Skiploom, and both have Nuggets. Gillian has 2 Lv. 47 Mareeps that both have Stardusts, and a Lv. 49 Flaaffy that has a Nugget. Gillian gives Y9800 for beating her and the other lady gives Y10000. If you use the Amulet Coin, these double to Y19600 and Y20000. So, have a level 100 Alakazam with Trick and another Pokémon with an Amulet Coin and you will rack up money like crazy.

Delibird can be found in Icefall Cave on Four Island. FireRed only!!!

When At Any Pokemart, Go to the little sheet and say Link Together With All. The Owner will say somethings. Save and Restart. The mystery gift will be under the new game.

If you want to have a really strong team to prepare for the Elite Four, and you have all three starter pokemon, you should have venusaur learn Frenzy Plant and SolarBeam, Charizard learn Blast Burn and Fire Blast, and Blastoise learn Hydro Cannon and Hydro Pump. Blast Burn, Hydro Cannon, and Frenzy Plant are like the fire, water, and grass versions of Hyper Beam and cause as much damage as Hyper Beam (not counting weaknesses and strengths).

Ok if you are in need of cash best way to get extra. $$$. Is to catch a MEOWTH as early as possible in the game, you can get one in CERULEAN CITY just before you get to the pokemaniac BILL. I got mine in lv10 aside from having the ability to pick up items including NUGGETS. It will lern PAY DAY which at LV20 will give you an extra $100 cash for everytime is use and it will go up $5 a LV. So if you use it 10 times in a poke battle at LV20 you will get an extra $1000.

Okay, in the safari zone, you have a limit of about 600 steps. So, if you are repeatedly spending money trying to get a chansey or tauras, this is the trick to getting them without losing steps. All you do is go to the area you want, for example, area two. Then go into any patch of grass or water, and lightly tap the pad in any direction. If you tap the pad light, then you will turn and face the direction you tapped, and you will not move. And, you still get Pokemon! Once you've caught the pokemon you desire, you can just hit start and retire.

You beat the Elite Four twice then sail to island 1 and fix the net work machine.

Strategy To Beating The Gyms

This Strategy helped me beat 5 out of 8 gym leaders, Make sure that your party has Lapras, that the Lapras knows knows Perish Song, and that the Lapras has high speed or is holding Quick Claw. This only worked part of the time, but use your other Pokemon to get the Leader down to one Pokemon so he can't switch pokemon, then switch to Lapras, and use Lapras's Perish Song, so the leader's pokemon will faint in 3 turns. If you don't want to lose Lapras, switch it out and use your Pokemon with a strength against the leader's, or with high HP because the leader's pokemon will use it's most powerful attack, in a feeble chance to win.

If you have unlocked the first three of the Sevii Islands, go to One Island and head to Mt. Ember. Search the area after the first trainer battle inside Mt. Ember for a shiny Rapidash. It is a Cream-color with Blue flames, and it'll be at level 39. Also, there is a path where you can go through the grass to get an ether. Look through the grass to find a level 38 shiny Fearow. It'll have the Pokerus disease and is a bright gold color.

So basically the 3 starters are Charmander, Squirtle, and Bulbasaur.
Charmander: Best choice if you want ATK power, plus, He learns good moves, and the first 2 gyms you may have trouble with, but they won't know any powerful moves. Have other pokemon to help you
Squirtle: Okay choice, but you'll want to have other pokemon, Squirtle has a solid DEF, but he won't learn many good attacks, so you may have trouble.
Bulbasaur: worst choice, because he doesn't have alot of strong points, and too many weakneses. although he can't be poisoned, his move list is rather pathetic.

Surf south from Fuschia until you hit a barrier. Then, Surf west to the Seafoam Islands. When you see boulders, push them into the pits to reach the legendary bird Articuno.

How To Catch The Legendary Dog

First, make sure you have beaten the Elite Four twice. Next, catch a Wobbuffet in Cerulean Cave. Its Shadow Tag keeps the Legendary dog from escaping. Use moves like Counter to weaken it.

Go to the island with the volcano on it. Once you get to the volcano, go to the very top. You will see a bird that looks like its wings are on fire. Before you confront it, you should make sure you have some ultra balls. About 50 of them. Save the game before you confront it. That way if you accidentally kill Moltres, or you run out of Ultra Balls, you can just shut of the game and try again.

To get more Rare Candies, look for some Meowths. You are 30% likely to get one

Go to Two Island and go to the house where the lady teaches you the special move. Go behind her house. Walk foreword until there is rooom for one more step. Then press "A". (It is hidden)

When you have Action Replay for GBA they will have cheats that you can give the game. Once you have checked it off start the game and all of your pokedexes will be complete.

When you beat the pokemon league, later on, go to 2 island and go to the tent mart. The clerk will sell lavacookie, timer ball, and repeat ball.

Where To Find Zapdos

After you beat Blaine, say yes to Bill's offer. He will take you to One Island. After you hear what his friend Felix has to say, walk back down to the ship and go to three island. On the beach part of the island, you will see a cave opening. go through the cave and you will find a small patch of grass. This is the only place you can catch Dunsparce!!! Though it is a pretty useless pokemon to battle with...

To Duplicate Eevee, go to the four island and make sure you have a Ditto. Put Eevee and Ditto in the day care center, so you can get an egg. To hatch the egg ride your bike up and down cycle hill.

To get a Master Ball you have to have gotten the Tea from the Old Lady in Pokemon Mansion(first floor front entrance). After you get to Saffron City, train your Pokemon until they are around Level 30-35 so when you face your Rival they will be all around level 40. After you get the card key, go down to the second floor and go to a room all the way on the left. Step on one of the teleport tiles and it will take you to a small room with a man who will give you Lapras and your Rival. AFter you fight your rival and get the Lapras go into the teleportation tile and it will take you to the eleventh floor where you will fight Giovanni(Team Rocket Boss) and a Rocket Grunt. YOu should be able to wipe out Giovanni if you have a really powerfull water or grass pokemon (Blastoise or Venusaur). AFter defeating Giovanni go talk to the President and he will give you the Master Ball. Master Ball will catch any Pokemon without fail and no matter what the HP. Also, you should save the Master Ball until you get to either the THree Legendary Dogs or Mewtwo.

When you choose your starter, later on in the game, depending on your choice, you will have the chance to catch a legendary dog. The dog you will receive has an element that adds a strength to your Pokemon. * Squirtle: Raikou * Bulbasaur: Entei * Charmander: Suicune

You can only go to the Unknown Cave after you beat the elite four the second time and fix the machine in Island 1. Head to Cerulean City and go north and Once you've crossed the bridge, go surf on the left a path and you will see a cave. It filled with powerful Pokemon level 40 and 50 or more. At the end of the cave a legendary Pokemon - a level 70 Mewtwo.

These are the prizes you can get for exchange coins beside the Game Corner in Celadon City.

Get All 3 Starter Pokemon!

To do this you must have 2 gameboy advances(Or GBA player/ GBA SP) and 2 copies of Fire Red, or A copy of Fire Red, and a copy of Leaf Green. 1st, start both games, then pick a starter pokemon. Catch 1 other pokemon. Then, in the games, get to a part where you can trade, and trade your starter pokemon into the other game. Keep erasing and restarting your game, until in 1 game, a person is equipped with 2 Charmander, 2 squirtle, and 2 Bulbasaur. The other game should have any 1 pokemon. Trade back one of each, and you will have all 3 starter pokemon! (You can also use Ruby/Saphire as a storage unit for this trick, but that requires a normal link cable, and the pokemon will NOT show up on the pokedex!)

There is a special attack that your pokemon can learn. It has to your begginer pokemon though. They each have the same power points (150) and accuracy (90). Blastoise learns Hydrocannon, Charizard learn BlastBurn, and Venasaur learns Frenzyplant. They don't learn it on their own. To get this move you have to go to two island and somewhere after their there is a lady who says that she an attack thats like the future a sight or something like that. But make sure your starter pokemon is in front.

We have no cheats or codes for Pokemon: FireRed yet. If you have any unlockables please submit them.

We have no unlockables for Pokemon: FireRed yet. If you have any unlockables please submit them.

We have no easter eggs for Pokemon: FireRed yet. If you have any unlockables please submit them.

We have no glitches for Pokemon: FireRed yet. If you have any unlockables please submit them.

How to Beat The Elite Four Easier!!!

How to beat the Elite Four

Beat All The Bosses

Badges and Their Jobs

The All Time Best Pokemon Team

How to become a water/dragon master

best beat down team ever

How to beat the Gym leaders and the Indigo Plateau Trainers

All You Need To Master the Game

Submit a cheat for Pokemon: FireRed