Use the above links or scroll down see all to the Nintendo DS cheats we have available for Pokemon Mystery Dungeon: Blue Rescue Team. 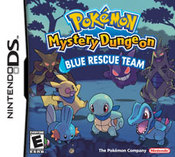 Mewtwo and Mew are practically the same pokemon, except that Mew can learn all TM's, HM's, and DM's. I taught Mewtwo Ice Beam, Psychic, Strength (found in Buried Relic, floor 60. Keep on searching until you find it), and Safeguard. I taught my Mew Fire Blast, Protect, Wide Slash, and my favorite, Overheat. Mewtwo in my opinion is easier to get than Mew, but Mew is easier to get to, so I got both, with a lot of time and patience.

I started out as a bulbasaur and I tried the gummis and everyone said "it seems to like this gummi. " and the ones he loves were grass and pink gummis I had my bulbasaur up 2 6 stars by the time I got to be fugitives and 9 when I got to go against groudoun!

Chickorita Is A Weak Pokemon

I had chickorita as my partner pokemon and she wasnt using very powerful attacks like 26 damage each to like water pokemon and she had the powerband on so I looked at her stats and her attack was only 35 and she was a higher level than me and I had like 54 without the power band on so I don't want to ever be or be partners with chickorita and I don't think you should either.

How To Get Surf

To get surf you have to talk to lombre at the pokemon square and he will tell you to talk to wishcash after you talk to wishcash he will give you the hm surf make sure you have a water pokemon that can learn surf in your team or you can't go to the dungeons that require the move.

Ok do you have problems recruiting legendary pokemon? Well you should hold a friend bow! Go to the main menu and select wondermail. Then enter the following code: F? 8N P! + ? ? R ? - . N ? M 64? 6 KQ? W Or just go to Mt. Faraway on the 30th to the 33rd floor and you should find a locked up box in the wall with a friend bow in it. Use a key from solar or western cave to open it.

First, you must recruit an Eevee (Joyous Tower floors 12 - 17). Then, raise its IQ by 4 stars by using white and orange gummies. Once you do that, go to luminious cave (north of town square) and go in and say that you want to evolve. When it asks you if you want to give an item, say yes and use a Lunar Ribbon for Umbreon or a Sun Ribbon for Espeon.

Rayquaza is very tough to get to, so make sure you have a Bagon as your third team member, and once it evolves into Salamence, it will learn Fly, and you can go to Sky Tower. Rayquaza is easy to beat, if you have an ice type move, like Ice Beam with my Vaporeon (I am not a girl, but I like getting Eevee because it can evolve into five different pokemon).

Easy Way To Get Recruitments

Get a strong pokemon, like Sceptile, and go to a weaker area, lik Sinister Woods. Just keep on attacking normally and eventually you should get it (note: If you want Scyther or Aipom, have your starter as Pikachu or Treeko).

If you need to get a friend area, save your game when you fall asleep, and when you wake up, if Pelliper drops off mail, check it. If not, shut the game off and try again.

When you beat Rayquaza, you get sent back to Xatu, and yadda, yadda, yadda. When you get back to your base, check the mail. All of them should be escorts. The last one it to Sky Tower, and you escort him/her to a really high level. Your reward should be a new friend area.

To easily beat all bosses, you just have to link all your moves before entering the boss room. I beat all bosses only using a Bulbasor and Cyndaquil.

Surf can be found on the 20th floor of Solar Cave you will need to be able to walk on water.

Once you stop the meteor, Wigglytuff will have more friend areas in stock. Now, you can recruit pokemon like swinub (and mew) that you couldn't get before!

When you battle groudon you should have a water type or grass type pokemon with you. Groudon only has weak attacks (unless they are super effective) and if he keeps getting hit by attacks such as water gun or razor leaf, he should be defeated in about 7-9 turns. Make sure to have lots of graveler rocks and blast seeds (they do alot of damage against him) I did this with a machop and chickorita.

To get a ginseng beat a rescue team at the Makuhita Dojo.

A totter gives the eater confusion status. It also slightly fills your belly.

Gummis are a food item that raises your belly depending oon the pokemon. Some gummis let you learn new skills like PP checker.

Once you beat the game you talk to Medicham she says Lombre almost drown. Talk to Lombre he gives you access to Stormy Sea. There are 40 floors, and at the end Kyogre battles you.

To battle the Regis you get a letter in the mail it says to get to the Buried Relic. When you get to Bf15 you battle one.Bf25 is another one.And 35 is the last one.

Some friend areas are given to you when you do a rescue mission, and others are given by beating a boss (EX.Lugia=Deep Sea Current.)

Do you need more friend areas? Well I have one for you. Go to the title screen and select wondermail. Then enter the following code:? 6J. 9KT? 4N7! W#? N FN? T P? W

All Of The Friend Areas You Can Get Through Missions

Have you ever wondered where to get dive because certain dungeons won`t let you go in them? Well enter the following code at the title screen in wondermail (f) stands for the female sign.
? -N 6 (F)F? 4R? S M (F)? 4 64N6 C? W .

Get A Mime Jr. Statue

Easily Get A Joy Seed

Get A Tight Belt

Enter 1?-???S?4??6RF??F4?6…P?? as password. If you have the Tight Belt, you will not use any belly while you hold it. If you lose it, just turn the game off. If it quicksaves before hand, like Buried Relic, use an escape orb just before you die, or bring 19 reviver seeds. I did this and I never lost once.

Clear Pitfall valley and get friend area Sky blue meadow. Eventually medicham and ekans will show up where you evolve. Talk to them and sleep. Later, only Ekans will show. Talk to it and then go to the bulletin board and select the rescue mission in wish cave 20th floor. You need surf to go there. As a reward, Medicham will give you a wish stone.

Clear all the dungeons in the makuhita dojo.

If you want to get Lucario, when you get to Lucario Rank, which is 15,000 points, go to Pokemon Square immediately and Lucario should be there and challenge you to a battle. If you win, he should join your team, but make sure you have all of the friend area's you can get.

To unlock Western Cave, you have to recruit Ho-oh into your friend area. Mewtwo is there at the 99th floor, so bring plenty of reviver seeds, because Western Cave is very tough. If you want to recruit Mewtwo, buy Cryptic Cave from Wigglytuff, and have only one pokemon in your party.

We have no easter eggs for Pokemon Mystery Dungeon: Blue Rescue Team yet. If you have any unlockables please submit them.

We have no glitches for Pokemon Mystery Dungeon: Blue Rescue Team yet. If you have any unlockables please submit them.

Almost all you need to know for Mystery Dungeon

All about Dungeons, Friend Areas

The Pokemon you can start out with, and their stats

# of Floors in Every Dungeon

All You Need To Know About IQ\Gummies