Use the above links or scroll down see all to the Nintendo DS cheats we have available for Pokemon Mystery Dungeon: Explorers of Time. 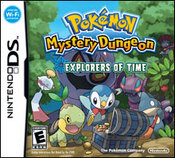 An Easy Way Of Defeating Dialga

Get a Pokemon learn "Mirror Move" (Torchic learns "Mirror Move" around Lv.37). So when Dialga uses Roar Of Time, the damage you take will be returned to Dialga itself. Also take around 4 reviver seeds with you in case you need it (Note: You can use this trick against other bosses or other tuff Pokemons)

Golden Apples are extremely rare food items. They completely refill and greatly increase the size of the eating pokemon's belly. To find them, complete a job that involves exploring a Golden Chamber. The boxes in the chamber will contain the apples when you get them appraised.

To get the Secret Slab or the Mystery Part (needed for finding certain special pokemon), check the job listings board for a client looking to go on a mission and find either item.

How To Get Hitmontop, Hitmonchan, Or Hitmonlee

To get Darkria to join your team you need a mystery part.

After you beat the game(defeating Dialga) do some missions and you will eventually find a Mr. Mime at the Treasure Town. Talk to him and he will tell you about Blizzard Island and how a long time ago Scizor got trapped deep in Blizzard Island. Then you gain access to Blizzard Island. Get through the 20 floors and you go to Crevice Cave. Get through its 10 floors and save at the Kangaskhan Statue and get through another 14 floors. Then you meet Frosslass. Fight him and then you will save Scizor and he will thank you by giving you the Secret Rank.

How To Beat Mew

To beat mew you'll need about 4 X-eye seeds. If you don't have any X-eye seeds, you will need tons of reviver seeds. You would a lot need a psychic pokemon, in that case you would not need reviver seeds. Do not bring any rock pokemon with you. When your attacking mew throw one of you X-eye seeds at it. If Mew dodges the seed, throw another one. After being hit with an X-eye Mew can't see straight. Use Psychic and Confusion to bring down Mew. (Hint: You can also use Crunch or Bite to bring down Mew)

After unlocking the ability to evolve pokemon by graduating from the guild, recruit palkia to be able to evolve your starters

My friend has the Golden Mask and he says that you make new recruits faster with the golden mask. To get it, go to one of the Zero Isle dungeons and complete the dungeon.

Here is a quick way to beat Dialga. Use ground moves! It took me 5 digs (3 missed) to beat him.

When you beat the game [beat dialga] go down to the dojo. You will hear a loud noise and there you have it the Final Maze.

If you feel that you need to strengthen yourself and collect new items, you should train at the Marowak Dojo. Here, you can train without risk of losing any items if your KO'd. But, you must first place all your current items in the Kangashghan Storage, or you'll lose all of your current items.

Some days after Team Skull joins the guild for an expedition, the Link Shop will be available that time.

We have no easter eggs for Pokemon Mystery Dungeon: Explorers of Time yet. If you have any unlockables please submit them.

We have no glitches for Pokemon Mystery Dungeon: Explorers of Time yet. If you have any unlockables please submit them.

Legendaries and their Locations

Created by: Adi the great. Read the full guide...

Submit a cheat for Pokemon Mystery Dungeon: Explorers of Time