Use the above links or scroll down see all to the Game Boy Advance cheats we have available for Pokemon Mystery Dungeon: Red Rescue Team. 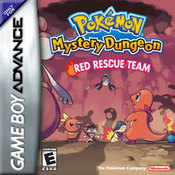 Get Deoxys And Lugia

First, to get Lugia, you need to recruit Zapdos, Articuno, Moltres, and Kyogre. Hint:You don't need their freind areas to recruit them. Once you recruit them, you get their freind areas automanically. Zapdos is in Mt. Thunder, Articuno is in Mt. Freeze, Moltres is in Mt. Blaze, and Kyogre is in Stormy Sea. (You need to have the freind bow to recruit them). Once you get all of them, go to the Pokemon square. Notice Alakasm isn't in his usual place. He is by Charizard, Tyranitar and Lombre. Talk to him. Say ye. Then go to the Legendary bird's freind area. Then go to Silver trench. DO NOT RECRUIT ANYONE. Lugia is a big pokemon. Just Lugia. (Remember, Bring the friend bow).

Kyogre is in Stormy Sea on B40 floor. If you defeat it, it will join your rescue team, even if you don't have its friend area, Seafloor Cavern.

Fire stones can be found on floor 29 in Firey Field.

You can find the water stone on the 29 floor in northwind field.

In Purity Forest, the only pokemon you can recruit is Celebi, and that is if you manage to get to the 99th floor. This takes some real skill to do, and you have to be very good to beat it, since you start out at level 1.

In Tiny Woods, you cant recruit anyone.

At a certain point in the game you will unlock a stage called Joyous Tower, about the same time as you unlock that you will most likely to unlock the joy seed. The joy seed, when eaten, raises the pokemon that ate it by ONE lvl. This will make non-item evolution easier.

Get to Lucario Rank, and after that Lucario should be in the square. He will challenge you to a battle, and he should join your team after you win. Have all of the friends area.

In order to get Mew, go to the Buried Relic. When you defeat the Regis and get the Music Box, DON'T PLAY IT. Instead, just keep it in your toolbox. From the 36F on, Mew may appear randomly. NOTE: Mew is not considered a boss. It will appear just as a normal pokemon. You must also have the friend area Final Island.

The second to fifth time you battle Arcticuno, it should join your rescue team.

After you defeat Ho-Oh on Mt. Faraway, take a key and go to the thirtieth floor. Since you quicksave before you enter the dungeon you should carry an escape orb. On the thirtieth floor behind a locked door you will find an extremly rare item called the friend bow. It makes recruiting pokemon easier.

Getting The Regi Stones

First of all, just know that Ancient Relic has 100 floors. On the 15th, 25th, and 35th floors, you will have to battle and defeat Regirock, Regice, and Registeel (in that order). You will get 3 stones by defeating all 3 of the Regis- red, blue, and yellow. Once you have all three stones, they will create a music box. This box plays an enchanting tune that will bring to you a special gift. Just wait until the right time to use it(in Ancient Relic). I refuse to say anything else. What the music box brings is a secret that's up to you to find out!

Some Pokemon require the use of items to evolve, such as stones or ribbons. Here are the locations of those items:

When you battle Groudon you should have a water or grass type pokemon with you. Groudon only has weak attacks (unless they're super effective)and if you keep throwing attacks at him like water gun and razor leaf, he should be defeated in about 7-9 turns. It might help if you brought lots of blast seeds(they do alot of damage) I did this with a machop and chickorita.

Absol becomes one of your team members when you get chased by Gengar and them all.

In the far-off sea, get to floor 50 with a key and open the key door and there will be wideslash.

The Stormy Sea has 40 floors. On the 40th floor, you will have to fight Kyogre, so unless you or your partner, you're goin' to lose.

When your in the sky tower where Rayquaza is. If you get to the top and you cant beat him I suggest you train in those last 10 Floors over and over again until you can beat him $$$69$$$

Once you get enough Rescue Points, you're Rank will be higher. The following shows how many Rescue Points you'll need to get a higher Rank:

If you are inside a Dungeon, and if your partner faints(the one that you pick in the start of your game), you will have to escape the dungeon and start all over. There is a 30% chance that if you bring a friend from a friend area, that pokemon will not be your friend anymore. You will lose ALL the Poke you had with you if you lose. You will also lose half of your Items you had with you.

The 16 Starters For The Game

If you lose against a pokemon, and you think is hard such as fighting Scarmory, Moltres, or Zapdos, go to Tiny Woods and Train with your pokemon so you have a better chance of beating it next time you go there!

Special Band raises the special attack of the pokemon that holds it.

Grass gummy raises the I.Q. of the pokemon it is given to. It also slightly fills thier bellys. Grass type pokemon like it best.

Blue Gummy raises the I.Q of the pokemon that eats it. Water type pokemon like it best.

Plain Seed doesn't really do anything. When eaten it slightly fills your belly.

The Silent Chasm has 9 floors

Raises the pokemon's I.Q. Dragon type pokemon like it best.

A food item thet makes the user sleep. The pokemon will be unable to do anything. It also slightly fills the pokemon's Belly.

Escape Orb allow s your rescue team to escape from the dungeon.

After you beat zapdos your gona end up somewere were you have to choose were you want to go pick Mt. Blaze get to the top and you will have to fight moltres. GOOD LUCK!

There are 10 floors in Uproar Forest.

There are 12 starters. They are:

There are about 10 floors in Mt.Thunder. After you reach the 10th floor, you will enter the peak and be able to save. Then you will have to scale 3 more floors in order to face Zapdos.

We have no cheats or codes for Pokemon Mystery Dungeon: Red Rescue Team yet. If you have any unlockables please submit them.

We have no easter eggs for Pokemon Mystery Dungeon: Red Rescue Team yet. If you have any unlockables please submit them.

We have no glitches for Pokemon Mystery Dungeon: Red Rescue Team yet. If you have any unlockables please submit them.

Evolution Items and What They Evolve

All Pokemon in both versions Part 2

All Pokemon in both versions

# Of Floors In Every Dungeon