Use the above links or scroll down see all to the Nintendo DS cheats we have available for Pokemon Ranger. 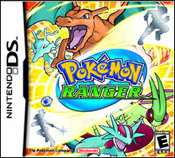 Muk In The Sewer

When you get the sewer mission, you have to capture grimer, well there's also a Muk. Make sure you have magnemite and a save machine near you.

One of your missions will be to escort him through Lyra Forrest. Well, just put up with him and when it looks like your lost, go up, down, up when you see the Murcrow again.

The Legendary (And Big) Vegnagun

After you get the completion Emblem, there are a certain number of other things you have to do before you get the mission. Get to the Beginning Dimension, and you will see a pokemon come up. That is Vegnagun, a Shadow of a Pokemon that was created by a guy named Shuyin (Vegnagun was loyal to Shuyin before you catch him, and will turn on Shuyin later). Vegnagun is so big, it's face alone fits on the two DS screens. In battle, Vegnagun is half as tall as the Touch Screen, making capture NEARLY impossible, but not COMPLETELY impossible. To make things worse, you have to circle Vegnegun 500 times (I completed the mission, and the first number that came up in battle was "499"). I don't know how to unlock the mission, but once completed, it appears in the Ranger Net.

First, you must beat the game. Go back to the fiore temple summit and you'll see a man with 2 drowzee. Talk to him, and he'll ask if you want to take his challenge. Say yes, and you'll go back in time to where you fought Gordor (NOTE: the man will only let you have 3 friend pokemon with you and you have to release them after the challenge).

When trying to catch pokemon and you use a Poke assist, the type match ups effect the capture. So if you are trying to capture a fire type pokemon, try using a water Poke assist.

Gordor has three legendary Pokemon which are Raikou, Suicune, and Entei. To defeat them you need a Gengar [Raikou] Plusle or Minun [Suicune] and Vaporeon [Entei].

Once beating Ranger, go to Ranger Net at the main menu & press L, X & Right. Enter the password should appear, and enter P8M29D6F43H7.

When you beat the game the Capture Arena will be available to enter.

You must have the other 209 Pokemon in your ranger dex before Snorlax will wake up. Snorlaxs location is at the Cycla Mountain Range.

In order to get the completion emblem, you must have all 210 Pokemon in your Ranger Dex.

To unlock special missions, you must beat the game. The Special missions includes: Find Celebi, Understanding and Confronting Deoxys, and Find the Phantom Mew.

We have no easter eggs for Pokemon Ranger yet. If you have any unlockables please submit them.

We have no glitches for Pokemon Ranger yet. If you have any unlockables please submit them.

All Pokemon And Where They Are

Anything and everything about Manaphy

Everything about the special missions

Submit a cheat for Pokemon Ranger