Use the above links or scroll down see all to the Game Boy cheats we have available for Pokemon Trading Card Game. 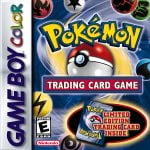 Go in to the fighting club and talk to the man who is sitting down near the table, just give him the pokemon cards that he wanted, he'll give you the card at last!

Go to the top center of the game map to find the Challenge Cup. You can compete in the Challenge Cup located in the Challenge Hall after you obtain your 3rd and 5th medal. If you battle there, you will get a rare card. It is hard to get in, because it is usually closed. Keep on visiting after every battle. If you enter, you will fight three trainers. The third one will be Ronald if you did not complete the game. After you complete the game, Ronald will not appear. These are the cards that you can get:

After you get all 228 cards, go to the Challenge Hall and the last person you battle will be Ronald.

After you defeat the four Grand Masters, you will battle Ronald. He got to the cards one step ahead of you. Ronald's deck already has the four legendary cards, and thus is difficult to beat. Use Hitmonlee's (Lv. 30) Stretch Kick and knock out Ronald's benched Pokemon one by one. This is best done when he has his Kangaskhan on the arena, because he will need three energy cards to retreat. Since this kick does not apply resistance on the benched Pokemon, they can still be hurt even if they have resistance to Hitmonlee (Fighting).

More Cards From The Grand Masters

After defeating the four Grand Masters, go back and fight them again to win more cards.

When you defeat the Grand Masters, go to the deck machine on the top of the screen before you get the cards to build a strong deck. If you do not do this, the game will proceed to the credits and you will have to battle again.

In order to fight Mitch of the Fighting Club, you must first defeat his three students. They are all training at different clubs. Jessica is in the Lightning Club, in the room on the left. Chris is in the Rock Club in the same room. The last student, Michael, is in the Grass Club just as you walk in. He will be next to the plant. After you defeat them, they will all return to the Fighting Club.

To get the Lv.9 promo Slowpoke easier, put all of your energies except one in temporary decks. Then, talk to the boy. He will reveal the location for only one energy.

When you are in the Challenge Cup, save the game after defeating the second to the last opponent. After you defeat the opponent and win a card, if it is one that you already have or do not want, shut off the game and continue from the save. You should be at the very last opponent. After you defeat him there will be a different card than the last time. Note: This may be repeated as many times as needed.

Go to each club lounge until you find Imakuni. Then, battle him to get four booster packs for each victory. However, he may instead give you his Imakuni card. Repeat this until you have most of the cards needed to build a healthy deck.

After you trade Ishihara all the cards she will disappear. Go to the Rock Club and a woman will tell you that Ishihara left.

Press B if you do not want to wait for the cards to be done shuffling.

While walking, hold B to move faster.

Get Tails On Coin

Just before the opponent's coin is displayed when battling an opponent, press Up. If done correctly, it will land on tails most of the time.

Get Heads On Coin

When the Pikachu coin is spinning right on Pikachu's face, press A. Note: This requires precise timing.

When you go to the Psychic Card Club there is a person in green. He is your character in the Red, Blue, and Yellow versions of Pokemon.

To get a free booster pack, go to your PC.

After getting your own deck, go to Sam and offer to play a real duel. You will use the same practice deck and the flow of the game will be the same as during the tutorial. If you win, you will get booster pack full of energy.

Professor Mason will give you a booster pack after every e-mail he sends you.

Get Different Cards From Professor Mason

Save the game before reading the e-mail from Professor Mason. Whenever you get a type of card you do not want, reload the game. The cards will be different when the game is resumed.

Select the Charmander and Friends deck at the start of the game.

When you have a bad outcome or use a wrong attack in a battle, just turn the system off. This will save the battle, which you can return to and repeat your turn. This is useful when you do not want to lose a Pokemon. Simply allow your opponent to attack, then turn off the Game Boy.

After you defeat the first person, go and defeat him again and to get a booster pack full of energy cards. You can repeat this trick as needed.

We have no cheats or codes for Pokemon Trading Card Game yet. If you have any unlockables please submit them.

We have no unlockables for Pokemon Trading Card Game yet. If you have any unlockables please submit them.

We have no easter eggs for Pokemon Trading Card Game yet. If you have any unlockables please submit them.

We have no glitches for Pokemon Trading Card Game yet. If you have any unlockables please submit them.

How to Crush the Club Masters