Use the above links or scroll down see all to the Dreamcast cheats we have available for Power Stone 2. 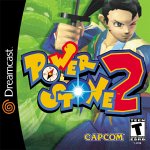 When he does the spin attack jump on his back and kill the guy in the tail. Press action next to it. You then should be able to shoot the laser with attack.

Get Giant Fork And Spoon

Mix an umbrella and a toy hammer in that order with no essence and while its mixing, hold A. You should be able to get up to 6 sets of different items. If you get the giant fork and spoon, sell them to Mel so the final Boss cant use it to stab you.

Get The Mysyrios Light Stone

Simply get all the items in the game and then play adventure mode, it will apear in a treasure chest.

When you transform do the uppercut[not the missiles] To do this just press the L triger pressit simontinuasly {not holding}. It will double the attack with out wasteing anymore of your power gauge.

Beat arcade mode with all the people and unlock Mel. (the girl that works in the store),and Pride (that man that looks like a pilot).

If your enengy is low or even if it's not, do Galcon's super missile special. It will block you but still do damage to your enemy on impact.

Beat The Game Easily With All Characters:

When you mix a Kitten with a Wind Up Key you'll get a Level 4 Panther. When you mix a Leg Weight with a Trap Element you will get the Leg Trap.

To get easy money get at least $700 then go to the shop and buy a banana then talk to Mel give it to Mel (the store keeper) as a present and she will give you a food card and if you sell that you will get $2000 and keep repeating the process until your little greedy heart is satisfied.

Get What You Want In The Roulette Game

I know this is common sense but if you go to the game and you don't like what she has there, then you could press "B". She'll ask if you want to quit. You say yes and just enter again. Do this until you see what you want. When you see whatever it is you want you can also use the D-Pad and the "A" button to increase the chances of you getting it. The only catch is that you have to pay for each time you move the line. To move the line go over to the thing you want and hold "A". While holding it, use the D-Pad to move the line. I suggest you move it once over if you are trying to get it. Just try pressing the "A" button right after the little power stone goes over the item you want.

To get 3 coupons easily simply mix 2 of the same items and add a copy card for the essence. Mel will say "take this coupon" but she really gives you 3 coupons!

In Adventure mode go to the aircraft level and wait untill you fall off and get to the ground in the river every few seconds a bunch of cards flow out. Just collect them and beat the person and you'll get them.

Finish basic mode with all the characters including Pride and Mel then go to the original mode and pick a arena and move the pointer all the way left or right.

Every time basic mode is completed with a different character a new option will be unlocked, until the extra option menu is full.

Successfully complete basic mode with seven different characters. He looks like an old Fokker, but has different moves.

Successfully complete basic mode with eight different characters. She is the girl from shop mode and fights similarly to Julia.

Successfully complete basic mode with all characters, including Mel and Pride to unlock three new arenas exclusive to original mode. To access them, move the pointer left or right at the arena selection screen until it is off-screen. A large box with the "Extra Arena" message will appear. Select the desired extra arena. The arenas are a small room, a very narrow bridge over along drop, and a geometric (cubes stacked in weird patterns) arena.

If during the course of the game you manage to pick up item #103, which resembles a red turban, sell it for 100,000 credits in shop mode. This item seems to appear randomly.

In '1 on 1' or 'Adventure' or 'Arcade' mode, you can change your characters costume by pressing the 'X' button to select your character.

We have no unlockables for Power Stone 2 yet. If you have any unlockables please submit them.

We have no easter eggs for Power Stone 2 yet. If you have any unlockables please submit them.

We have no glitches for Power Stone 2 yet. If you have any unlockables please submit them.

Submit a cheat for Power Stone 2