Use the above links or scroll down see all to the PlayStation 3 cheats we have available for Ratchet &amp; Clank Future: Tools of Destruction. 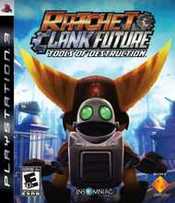 One thing I noticed is if you stand in the windowsill you loose control of Ratchet and it does NOT reset you. The only solution is to go to the Load menu and re-load the saved game you're playing. It will fly you to the planet you are on. Lastly, try throwing out groovitrons while "swimming" in the gold pieces. It adds a nice touch, especially if you have the unlimited ammo Golden Groovitron, purchasable in challange mode after you defeat Tackyon, and only at the devices vendor in Cobalia for a total load of raritanium.

On Planet Ardolis there is a video of Ratchet and Clank hiding behind chests of gold pieces. That room is actually there but is not a place you are able to go to unless you cheat. By using the Climb up Walls cheat, you can get in there. First, make sure you have completed Ardolis. Then go down the path from your ship until you reach the devices vendor. Behind it is a moving platform that takes you over to a place underneath the treasure room that you regain control of Ratchet at after the previously mentioned video. Go across the hypershot to the ship. Use the razor or shredder claws to climb up the mast to the left (if you are looking at it when you first get on the boat). You may have to climb up one pole and climb up the rest of the other. When you can't go any higher, fly towards the smoky window. If it is not billowing out smoke then you can't get in that way. When you get in, the smoke seems to clear, and there is gold everywhere. Unfortunately, it can't be picked up like money, but you can walk into it and it looks like you are swimming in it. Have fun!

If you go to the cragmite planet after you beat it, you will be in the fighting courtyard. Put on the holo pirate disguise and hit circle twice. Bad guys will appear and not notice you. If you kill them, you have to die before you can make more come. This is especially helpful for upgrading weaker weapons.

How To Get To The Final Battleground

Using the wall-climbing technique (see How to Climb Walls! ), go to planet Fastoon once it becomes night there and you have to fight Tackyon's troops. Go to the place behind your ship where there once was a ship part. Go to the middle of the building's curve, and climb up until you fall through the wall. Land on the secret floor below. Go right until you reach the edge. You should see a ledge. Climb up it, and then go to the dusty plateau. From there, go as right as you can. Then jump into the crack below. Instead of dying, you should end up standing on the rocks. Walk over in the direction of the hole in the ground, not the edge of the level. Jump down the hole and fly. You should see a bubble with something in it. It is where you fight Tackyon after you get sucked into the wormhole. After a while, you should land on the plateau. This is especially fun if you didn't kill Tackyon's cannons yet. Press triangle to see how many cannons are left, which shows that there is no reason you should even be there yet. Don't worry about Tackyon, he is not there. When you want to leave, jump off the edge and you will be back at your ship.

How To Get To The Clank Level On Reepor

On Reepor there is a Clank level, and you are not supposed to be able to go there as Ratchet. If you go to the part of the level where you used the Geo Lazer, there is a piece of wall between the lazer wall and the hole Ratchet made. Using the How to Climb Walls! Technique, climb this wall. Then proceed to climb the right tall pointy thing on the roof. Then fly from the top of the pointy thing and through the wall of the building behind it. Land inside and fly to the right until you land on a rocky part of the cliff. Above you is the clank level. Climb the wall and get up there. You are now in the Clank level. Should you fall in the water below, do mot be alarmed. It won't kill you and you can't get back on land, so swim as far out as you can until you fall for 30 seconds or do and die. As for the parts you need the Zoni for, Either climb over them, or jump and fly across. You can even step on the Zoni and stomp them into the ground. Have Fun!

Use this glitch to climb up walls. It takes a little practice. Get razor claws (or shredder claws) out, and get next to a wall. Do a high-jump and when you reach the top of your jump, hit circle. When you see the second swing of your claws, do a high jump. Repeat the process and have fun climbing! If you have trouble learning how to do this, look up "Ratchet and Clank Tools Of Destruction Reepor Glitch" on you-tube. This is no joke, I have actually done this and I saw it on you-tube.

Earn skill point giant hunter by killing all the laviathans in the colbia wilderness.

On any level, press pause and enter the Skins menu under "Extras. " Enter following code to unlock the prisoner / convict skin: Square, Circle, Square, Circle, Up, Up, Triangle, Down, Up.

On Voron Asteroid Belt, destroy 15 of the the floating mines in the belt.

To achieve this skill point, all you have to do is complete challenge mode.

Get the ryno IV by completing the holoplan.

After successfully completing the flying part of the planet, you have to turn and look behind you once you see the big dinosaur run to it and jump on its tail and make your way up it. Then turn around and you should jump onto the roof of the building with crates and wasps in the crates is the holoplan.

In order to access this more difficult mode, you must first complete the game. Once completed, this mode will become available to you.

This is the most powerful weapon in the game. To obtain the Ryno 4Ever, play in challenge mode, upgrade the RYNO IV fully, and purchase RNYO 4Ever from any weapons merchant for 50,000,000 bolts. Not too cheap, but worth it.

In order to get this extremely powerful weapon, make sure to grab every holo-plan found throughout the game. Once you obtain all 13, bring them to the Smuggler on Sargasso and he will assemble this devastating weapon for you... free of charge!

On Planet Ardolis destroy all of the Corsairs (the pirates with the guns) with the combuster.

On Kreeli Comet, break all the breakable icicles.

On Kreeli Comet, use turrets to destroy 10 dancing Pirates.

On Planet Jasindu, destroy 3 destructible towers while on the pirate barge (the ship that takes you to the other side).

Turn an enemy into a penguin, then use the Visicopter to destroy the penguin.

On Planet Ardolis, change 5 Pirates into penguins in one blast.

Skill Point: Knock You Down To Size

On Nundac Asteroid Ring, use Hyper Strikes on 5 Cerullean Centipedes.

Skill Point: Been Around

On Planet Kortog, take off from every robo-wing launch pad.

Collect all cargo containers (the bright roundish things with a triangle inside) on Voron Asteroid Belt.

Use the Groovitron followed by the Pyro Blaster.

Skill Point: Bolts In The Bank

Sell 20 Leviathan Souls to the Smuggler.

On Planet Viceron, use the Pyro Blaster on 3 Drophyds after freeing them from their robotic suits.

On Planet Fastoon, destroy every piece of breakable cover

Kill 75% of all the enemies in the Verdigris Black Hole

Skill Point: No, Up YOUR Arsenal

Upgrade every weapon to the max (that means to VX, not V5)

On Planet Igliate, complete the Gyro-cycle area in 0:55 without dying.

Skill Point: Stay Still So I Can Shoot You!

On Planet Igliate, use strafe flip 10 times while fighting the Cragmite Warriors.

On Planet Reepor, hit all Cragmite Warriors with the Mag-Net Launcher.

On Planet Mukow, ride the ferris wheel for 5 loops without getting off or taking damage.

Skill Point: For The Hoard!

Find all the Gold Bolts.

On Planet Sargasso, get 11 Anthropods (those red little crab looking things) in one tornado.

Turn at least 15 enemies or citizens into penguins at one time. (After you do this, just throw a disco ball out so you can get the "Happy Feat" skill point).

Get 9 penguins dancing on screen.

On Rykan V, complete the Gyro-cycl tunnel in 1:45 without dying.

On Ublik Passage, get 6 Pirates in a row to salute Ratchet while wearing the Holo-Pirate Disguise.

On Kreeli Comet, destroy all the campfire sauce pots with your wrench.

Skill Point: Dancin' On The Ceiling

On Planet Viceron, successfully use a Groovitron while on a Gravity Ramp.

On Planet Sargasso, kill all the Sargasso Grunthors.

On Planet Sargasso, land on all of the Troglosaurs' heads.

Skill Point: The Consumer Is Not [Always] Right

Skill Point: I've Got Places To Be

On Rakar Star Cluster, destroy Iron Crotch Caruso in under 2:30.

Complete Rakar Star Cluster without destroying any of the Snatchers.

Skill Point: You Sank My Battleship

In the Rakar Star Cluster, shoot down 75% of the big destroyers.

On Planet Ardolis, destroy 5 of the Thwongs while they are still sleeping.

Skill Point: Dancin' With The Stars

On Nundac Asteroid Ring, make 5 enemies dance at once on an asteroid.

In the Nundac Asteroid Belt, teleport to each of the six asteroids in alphabetical order.

On Planet Mukow, use the Geo-Laser to blast through the wall. (Take the same route as you did to get to the arena)

Use only the wrench to get through the level (Planet Kortog).

Kill all Basilisk Leviathans in the Cobalia wilderness.

We have no easter eggs for Ratchet &amp; Clank Future: Tools of Destruction yet. If you have any unlockables please submit them.

We have no glitches for Ratchet &amp; Clank Future: Tools of Destruction yet. If you have any unlockables please submit them.

We have no achievements or trophies for Ratchet &amp; Clank Future: Tools of Destruction yet. If you have any unlockables please submit them.