Get the latest Ratchet &amp; Clank: Up Your Arsenal cheats, codes, unlockables, hints, Easter eggs, glitches, tips, tricks, hacks, downloads, hints, guides, FAQs, walkthroughs, and more for PlayStation 2 (PS2). CheatCodes.com has all you need to win every game you play!

Use the above links or scroll down see all to the PlayStation 2 cheats we have available for Ratchet &amp; Clank: Up Your Arsenal. 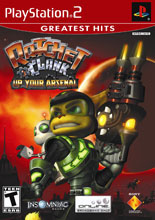 When you are facing the big boss known as the Spider Bot, it will throw out little mini spider bots. It has a lot of health so you need one of two weapons: either the Rhino or the Zodiac. The Zodiac only has four ammo so use it wisely, while the Rhino has 100 ammo so you can just shoot.

Ok this trick is kinda hard to do so listen up. If you can suck up lots of stuff with your suck cannon but already have ammo in it and don't want to waste it, then switch to it(so thats it's in your "press triangle to cycle between 3 weapons" thing), then press triangle twice to have the weapon before the Suck Cannon equipped. Finally, press triangle, then INSTANLY press circle. Your Suck Cannon will start sucking even though it still has ammo in it! P.S. I may be able to do this trick because my disk or PS2 is a bit messed up, but I'm not sure. Please try this a few times and please don't report this as bogus I'm just writing what works for me. P.S.S.Even if the Suck Cannon doesn't appear the instant you press triangle the last time, still press circle right away.

Skill Point: Be A Sharpshooter

Win the jackpot on the slot machines in Holostar Studios. Hint: If they all blow up leave the planet and come back.

Don't get hurt in the walk of death.

Another way to get to the Museum is to go to a secret teleporter in Metropolis between 3:00 and 3:59 A.M.

Go to aquatos and find slim cognito (the guy in the tube thing) and go up the elevator. When you get to the bridge look to the left of the bridge and there should be an enemy. (if he is not there try the other side).

No Flames For Jetpack

How To Beat The Quarktastic Challenge

This is how I did the Quarktastic Challenge. Hope this helps you win it as well.

To do this, just use the Quack-O-Ray throughout the challenge. The presence of the 80 Nanotech and Aegis Mark V armor should help you take less damage. Then, when a boss comes, just defeat them with the N90 Hurricane. And that's it. Happy hunting!

In 'Annihilation Nation', take out the refractor when the column lasers shoot at you, you will be protected. You will not shoot a laser.

When one of the aliens (like on the first level) in the robot suit shoots a laser at you take out the refractor and aim at the alien and when he shoots at you, the refractor will shoot a wide laser and instantly kill him.

Once you beat the game and you have to redo the tutorial world. Kill all the monsters on that world then die. These monsters all seem to have double to triple the xp they normally would have. Its an easy way to get those hard to level up weapons up to level 5 so you can purchase the amazing mega weapons.

To earn this very hard-to-earn skin, you must earn or find all the trophies in the trophy room in the Phoenix (basically beat the whole game), unlocking the door in the trophy room. There is a teleporter that goes to the museum and can be used whenever you like, and when you use it you get the Constructobot Skin!!! =D =D

When you get to Qwark hideout, turn around and go to the ice behind your ship. Go to the left side of the ice and behind it. There you will find the PDA then make sure you have 250,000 bolts. And then you will have unlimited ammo.

If you are playing multiplayer on Outpost X12 area, capture the node with the drones. Then go to your tunnel opening to your base and set them in defend that area. It is just a little extra defence if you are being pounded by the other team.

If you are farther in the game, go to obani draco and the area should look purple and very strange. For this to work, you will need gravity boots. Simply run through the area and you will see little robots floating around and kill them. At the end of the level, look at ur weapons XP and you should see a chunk of XP gained. Return to ship and and go to another planet and come back and keep doing this over again.

First, go to the Zeldrin Starport. Then, instead of going to Quark's ship, take the path to the right, where all the ninjas are. Follow this path and, eventually, you will come to a wrench upgrade called, "Bolt Breaker V.2" With the upgrade, when you jump and hit the square button, you will break all boxes, etc. close to you and attract the bolts that come out of them like a magnet. **Tip: There is a platinum bolt on the path to the Bolt Breaker V.2. It isn't too hard to find so look around.

If you don't have the Infernox armor, but still want to look cool by wearing it, start a new game and get to the planet where you need to rescue the president. Next, find the place where you get the Inferno box and hit it. Run to the drop ship and a cut scene will happen. After it is over you should still be wearing the Infernox Armor. Note: Do not go to the skins menu, otherwise it will go away.

Turn 15 bugs to duck with the Qwack-o-Ray/Owack-o-Blitzer.

Kill 20 enemies using the wrench or the wrench replacement in Blackwater City.

Destroy 5 of the Cameras in the gauntlet.

Beat all the Gauntlet challenges. (The obstacle cources at Annihilation Nation.)

Hit Skrunch with the wrench onboard Starship Pheonix.

Complete any Gauntlet without taking a hit.

Blow up 40 underwater crates in Aquatos.

Beat Scorpio (the scorpion thing at Annihilation Nation) using only the wrench or the wrench replacement.

Beat the hypershot vr training in under 50 seconds.

Skill Point: Reflect On How To Score - Planet Marcadia

Kill 20 enemies with the refracter.

Drive over the big ramp with a gap in the middle of it with the car.

On the starship phoenix, do to any holographic training, when you enter the training, immediately leave it, your ammo will be full.

When you beat the game & play again in Challenge Mode, you can buy Mega Upgrades for weapons that have reached Lv5 once you have reached Florana. You can upgrade them to Giga, then once more to Omega. They get more powerful & have a higher ammo capacity when they are at Omega level. You can also by the Ry3no, which is at 3,000,000 Bolts (2,700,000 Bolts with the Gadgetron 10% discount). You can upgrade this to the Rynocirator at Lv5, but there are no Mega/Giga/Omega upgrades for this weapon.

To keep your nanotech high when a monster shoots/attacks click the jump button 2 times. Also you can keep high nanotech by jumping in a monster zone and run through and jumping.

Here is the list of skins and what they cost

There are 15 collectible trophies in the game that when all collected will unlock insomniac museum and a special skin.

Here is what the skillpoints unlock:

There are 40 titanium bolts to be found all throughout the game.

There are 5 Vid-Comics in the game that you are able to play in as Captain Quark.

A lot of stuff in the game is interactive. Interactive meaning you can break it. You can just break random stuff to get extra bolts.

Double Bladed Laser Sword: To get it, (this will replace his rathcet's rench, but its beter though) pause the game and press/enter "Circle, Square, Circle, Square, Up, Down, Left, Left".

Go the Pheonix and go to the vid-comic area. When you get to the issue select press the square button to bring up the password screen. Enter _MEGHAN_ as a password.

When you play the first captin qwark game and beat it. Right when you exit press the triangle button to go back in. Press square and you should go to a enter password screen. Enter _MEGHAN_ to go to a pirate versus ninja game the same way I have it or enter YING_TZU to go to a bomber man style game but you play as a ninja.

Complete all the Challenge modes, there are 15.

Get all the guns and upgrade them to the fullest and you will get a skill point.

We have no easter eggs for Ratchet &amp; Clank: Up Your Arsenal yet. If you have any unlockables please submit them.

We have no glitches for Ratchet &amp; Clank: Up Your Arsenal yet. If you have any unlockables please submit them.

Submit a cheat for Ratchet &amp; Clank: Up Your Arsenal