Use the above links or scroll down see all to the PlayStation 2 cheats we have available for Ratchet: Deadlocked. 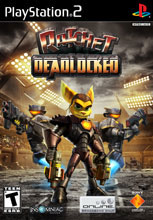 To beat Ace easily, equipe the ice mod on the weapon you like.

If your at a bolt crank and are getting shot at a lot command your a bot to crank the bolt then command the other bot to put a shield around the cranking bot. Jump onto the top of the shield and you'll go right through. But make sure to walk around in a circle not let the bot push you cuz he'll stop cranking. You can also shoot out of the shield but they can't shoot in!

How To Get Skins

When I first got this game, I automatically wanted the skins (especially W3RM the Dragon-Lizard). In other games skins are earned by completing skill points or finding large rare bolts (titanium or gold). But in this game, skins are purchased with stars. At first, I had no idea what on earth the stars were or hot to get them. I thought you were given them for playing long enough. Now, after owning Ratchet: Deadlocked for 3 years (not playing a whole lot), I realized that if you complete a challenge in a mode (couch potato, contestant, hero, exterminator), you earn however many stars that mode is (1, 2, 3, 4, or 5).
So what does this mean? It means that if you want more stars to get skins with, you need to complete challenges in a harder mode to earn some. I recommend doing this if you have the harbinger or the rocket launcher upgraded really high.
(One last note is that although harder modes reward health upgrades more often, it is not very useful to try upgrading nanotech because the maximum amount which earns an exterminator card [something really good and hard to get] is 999 and is nearly impossible to reach. ).

How To Upgrade The Shield Launcher FAST

When you have all of the weapons upgraded to level 10 buy the mega upgrades and a lot of xp mods and equip the xp mods to all the weapons. Than go to the challenge endzone and kill all those suckers with your mega weapons. You may have to play the challenge several times. Have fun.

Go to any world were there is an open area and a clear view of the sky. Equip the mega version of the arbiter and shoot it at the sky right above you and a reign of fire will come down on your enemies.

Once your on planet sarathos on the first challenge of the campaign called "alein soil" max out your ammo and buy as many weapons and as many jackpot and xp mods as you can afford. Then go and clear all the enemies in front of the buildings but don't hack the orbs. Then go behind the building. Once the announcer says "folk's what is this sneaky lombax doing behind the arena. This could be. Nothing its nothing he's just getting ammo. " go to the front of the building and tell your bot's to hack the orbs then after they hack the first orb tell them to regroup. Then an unlimited amount of enemies will spawn but pick up bolts as fast as you can and kill as fast as you can otherwise your ps2 will freeze. So there you go play as long as you want if your not in chalenge mode you can make about 1, 000, 000 in about a half hour but if you are you can make about 10,000,000 in a half hour. Plus you can level up your weapons very quickly. So go crazy.

Easy Way To Get Bolts

If you have the vulcan cannon (magma cannon upgraded to level 10) then go to the dread challenge endzone and take out the vulcan cannon stay behind the red line for a while then walk closer and just keep on shooting the enemies you will get about 5,000,000 bolts and lots of armor and weapon upgrades in 1 round. Then go to the weapons+mods shop and buy about 3 jackpot mods then put them on the vulcan cannon but leave about 3 ammo mods in the gun so you have a good amount of ammo. just do it as many times as you want.

To get eviscerator's exterminator card you must first get more than 100 nanotech bars (health bars) for ratchet.

To make the hovership honk, press the L3 button or click the left thumbstick.

This is a way you can earn bolts if you don't have endzone or the Ace Hardlight battle. To earn bolts this way you must have Sarathos, if you have this planet play the first level and were the hacker orbs are hack one of them and start hacking the other one [don't fully hack it]. When you done this attack the swarmers. When your console slows down save your progress.

Fill your favorite weapons with experience mod and use them Battling Ace Hardlight repeatedly.

To unlock Exterminator Difficulty need you beat the game.

Get all 6 exterminator cards to unlock the cheat ninja mode, witch gives you ninja gear, a sword stronger than the wrench, and increased movement speed.

Obtain a maximum health of 100 to get the slugga card.

To get this card you have to get every skill point.

To get the shellshock card you must collect all of the wepons and omega mods. The card tells you shellshocks stats and weaknesses. Rachet and clank rule!

To get aces card you must get at least 400,000 dread points. To get fast dread points you should keep repting dread challenges with good rewards.

In co-op mode if you get your bar full that you use to use your bots special attack and you and player 2 press L3 (press the left analong stick in ) you'll have smoke around you and you will do more damage for a limited amount of time. If you both press R3 (right analong stick in) you will get a shield around you that cuts damage in half.

When you get off of a planet and go to the dread station you get free ammo.

After you beat Reactor do the challenge called "EndZone" this will get you proximity $50,000 each time you do it. This will work best if you have the mini turret launcher (it costs $100,000) so you may have to do "EndZone" a couple of times to get it. In challenge mode (playing the game again after beating it) you can get proximity $1,000,000 each time so keep playing.

Go on multi player and click edit profiles. Click on edit new profile and hold L2 and press Left, Down, Right, Left, Down, Up(2), Left.

To get the Liberator Armaor , you must beat Ace Hardlight.

We have no easter eggs for Ratchet: Deadlocked yet. If you have any unlockables please submit them.

We have no glitches for Ratchet: Deadlocked yet. If you have any unlockables please submit them.

Created by: ratchet and clank rulez. Read the full guide...

Submit a cheat for Ratchet: Deadlocked