Use the above links or scroll down see all to the PlayStation 3 cheats we have available for Red Dead Redemption: Undead Nightmare. 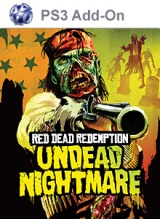 The Four Horses Of Apcolypes And Big Foot

There are four awesome horses that you can get from running around in this game and you will find big foot at times too. The horses are the four horses of Apocalypse. The one I found was war but there are 3 others. War is a fire horse that sets people on fire. The bigfoots are in the tall trees but for 1 misson only. Don't kill the one that talks to you. Watch the video and you'll understand why. The horses are very hard to find.

I love Undead Nightmare, but there are a few strange things that I find coolest. MYTHICAL CREATURES. There's lots of them including Sasquatches, El Chupacabra, the Unicorn and the four horses of the apocalypse, War, Pestilence, Famine and Death. Sasquatches are the easiest to find. If you do the mission, Birth of a Conversational Monument, a man will tell you to kill 6 Sasquatches in Tall Trees. They come up as green circles on the map. Once you kill five of them, the mission ends at a secret place outside the map. A Sasquatch is crying under a tree because somebody killed his kind. If you wait, he gets up. You can let him go and maybe see him later on or just kill him. However, keep in mind the quickest and almost only way to kill a Sasquatch is a headshot. To find the Chupacabra, you must be a level five or six undead hunter. He then appears. He is most commonly found near Diez Coronas, Las Hermanas and Perido. Once he's dead, you can find and break the Unicorn, found in Diez Coronas. Finally are the FHOTA (Four Horses of the Apocalypse). War is a flaming steed that stets stupid zombies you trample on fire. He can be found outside Cholla Springs and Armadillo. Next is Pestilence. He is a white, cut up horse that can be shot or clawed in the sides almost forever. A green cloud constantly follows it. Next is Famine. It is black with red eyes. Its sides can also be hurt a while. A huge cloud of flies follows it constantly. The final horse is Death. He is a universal horse. If you want to find him, you must be a rank four of FHOTA even then, it could take hours to find it. It is easier to beat all the missions and cure the world. You get it free after that. All FHOTA have unlimited stamina. For all of the mythical creatures, it says the note, a mythical creature has appeared in the blue area. It does not say it for the Unicorn. When you find one, the blue circle on your minimap may go away, but the creature is still in the area. To capture a FHOTA, you must lasso it, get off your horse, get on the FHOTA and break it by using the L analog stick to stay centered on its back.

Where To Find War Often

Cholla springs is the best place to find it.

You can enter the following codes in the Cheats Menu under "Options. " Enter the entire phrase given below to activate the cheat, punctuation included. Capitalization does matter. Once a cheat is entered you may toggle them from a master list. If the cheat effect isn't made obvious by its title, we give a description of it in parenthesis below. Entering cheats disables saving and Trophies / Achievements! Finally, cheats can often be found in a box at the bottom of the newspapers you can read in towns.

We have no unlockables for Red Dead Redemption: Undead Nightmare yet. If you have any unlockables please submit them.

We have no easter eggs for Red Dead Redemption: Undead Nightmare yet. If you have any unlockables please submit them.

We have no glitches for Red Dead Redemption: Undead Nightmare yet. If you have any unlockables please submit them.

We have no achievements or trophies for Red Dead Redemption: Undead Nightmare yet. If you have any unlockables please submit them.