Use the above links or scroll down see all to the Xbox cheats we have available for Red Dead Revolver. 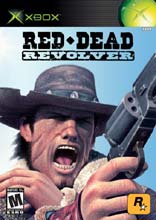 You don't need to do story mode to unlock people just keep doing showdown mode and after lots of battles you will unlock a group of people not all people at the same time but just keep doing it to unlock them.

When you face Buff and Holstein on the Range War level, I found that the best way to win is to go up to outhouse and then jump on it. Up there you can't get ran over by animals. Zoom in and try to hit them with head shots. After a while they will start circling around the outhouse. Intead of firing at you they will usually try to lasso you. This is a slow attack and allows you to get many shots in.

How To Beat General Diago

First, when you are on the gatlin' gun with the old man ignore the guys, and shoot the front of the engine, the armor will fall of, then it will explode. After that you will here diago yellin', throw a dynamite in the car when the windows open. his health wil go down, then he will jump out. next go on your horse and shoot him a couple of times. then just run into him on the horse a few more times and he should be dead.

As soon as possible jump up onto a building that is hard to access, get to the highest point so he cant hurt you with his dynomite blast. Try to shoot him in the back of the head when ever possible. The best gun to use is a rifle.

To kill Derin, you will need to go back down the ladder that leads to the gantlet gun, then when you get near Derin, (don't get too close) he will probably try and shoot his cannonball at you. This shouldn't be too hard to dodge. After he does that he is dazed and you need to then fire as much as you can at him until he is concious again. (Rinse and repeat till' he's dead)

To beat the professer, you must wait til he is in front of the girl, then use dead aim. Contenue to do this until he is dead.

On the level with the exploding dynamite Boss, sneak around and hide so that he does not see you. Note: Bongo music will play when he is on your tail. Then, shoot him with the rifle in the back. This surprises him (the game will say "You surprised him!"). Then, power on through with as many shots as possible to get his life down. Repeat the hiding routine, then sneak shot again. Do npt use combos, as they do not really effect him much. Just power on through with single shots; because the first one stuns and the successive ones hurt him. Also, when he is on your tail and is going to blow you up, do a sidestep or one of those rolls to get out of the way. The area with the low cement walls works well if you duck down.

Man With No Name

When starting a new game, instead of entering a name use the spacebar right to make a blank entry. When you enter this, it starts a character named "Rstar". In some of the stores some items show up as already sold to you.

Kill the other guys, strafe in a circle around him and roll as much as you can when he opens fire with the coffin gun, as he flips over it (or maybe it's right after he flips over it) start firing at him with everything you have. He'll stagger and take serious damage from your bullets as he does. When he regains his balance stop shooting, start circling him again and reload. Use the double pistols and don't bother shooting any other time than what is listed. He won't take very much damage if you do.

Successfully complete the game and earn an Excellent rating on each level. At the main menu press and hold R trigger + L trigger, X (2), Y (2). A level select will appear on this screen. Please note: If you do not earn an excellent rating on a level, immediately restart the level and try again. You will not be able to retry a level once you move on to the next.

We have no unlockables for Red Dead Revolver yet. If you have any unlockables please submit them.

We have no easter eggs for Red Dead Revolver yet. If you have any unlockables please submit them.

We have no glitches for Red Dead Revolver yet. If you have any unlockables please submit them.

We have no guides or FAQs for Red Dead Revolver yet. If you have any unlockables please submit them.