Use the above links or scroll down see all to the GameCube cheats we have available for Resident Evil 2. 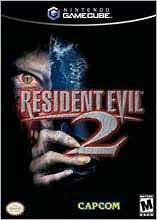 Begin a normal difficulty game and go to the courtyard in front of the R.C.P.D., then go down the stairs. Brad Vickers from RE will be waiting for you. No, he's not going to give you the gun, but he WILL give you trouble if you try to face him with the few bullets you have left from your run through the City. Head into the Police Station and pick up more ammo and perhaps a stronger weapon before going to meet him. If you manage to fell him, you will get the Secret Key. Take this key to the Dark Room save area and use it to open the lockers to the left of the door. Inside is the Colt Python S.A.A., which is almost more powerful than the magnum. It only carries six shots, but it's great for the last battle against William G-III and G-IV. An alternate costume is also in the locker, if you like that kind of thing. Oh, and one more detail. If this doesn't work, in that Brad does not appear, try again without picking up anything along the way to the Station. (Don't worry about not getting your characters'signature weapon, as a shotgun can be found in the S.T.A.R.S. Office for Leon, and a Bow-Gun in the Cabin save area for Claire, so you don't have to worry about not picking them up in the begining when the shop-keeper dies.)

While playing as Claire, if you equip the bow-gun and fire at a zombie that is in front of a wall, it will get pinned and die. This trick also works with crows, but it's not as effective as they are too fast to hit, but it can be done.

You will eventually become a little girl named Sherry in Claire's scenario. Walk up to a zombie and instead of biting you they will vomit.

Getting The Machine Gun

If you discarded the Precinct Key, you can regain in the room where you put the Red Jewels into the statues. Search the crates on the left side of the statue to find the it. You can also find H. Gun Ammo and an Ink Ribbon in this room.

In the second scenario, after you put the joint plugs in, you will fight a evolved form of Tyrant. Use the following steps to easily defeat him. For Leon, run to the right from him as soon as the scene (with black lines at bottom and top) ends. Start shooting him with the custom magnum three times, then run toward the exit door. Ada Wong will appear and drop a special grenade launcher. Run towards the grenade launcher, pick it up and shoot one shot to kill the Tyrant. If you are not an expert, you will also need first aid sprays or herbs. For Claire, you will do the same thing only using the regular grenade launcher with acid rounds. After this Tyrant, you will open the gate and get on the train. Another intermission sequence will play. After it finishes, the train will stop. Run towards the back of the train until you see a tentacle drop down. Another intermission sequence will play, and you have to fight the last form of William Burkin, as a revolting blob. Run towards the front of the train until you reach the door. Stop and shoot him with the remaining rocket. Then, use the custom magnum or a grenade launcher with acid rounds. Shoot him until he melts. After that, go to where you started and watch the ending sequence. The "Tyrant" in the second scenario is a indeed a Tyrant of the T-00 series but his name is Mr. X.

The code for the safe in the room with the double blue doors is 4542.

Unlock the room in the Lab which requires two people to enter. In the Culture Experiment Room is find a dead Hunter from the first Resident Evil game and a group of strange experiments.

Getting The Precinct Key

Go to the second floor, kill the Licker, and then go to the room with a door with S.T.A.R.S. written on it. Get the diary (green book), get the unicorn medal, talk to your "friend", and go down the stairs back to the fountain in the hall. Stand in front of the fountain and use the unicorn medal.

In the room where the giant moth is located, the computer asks you to use your user name. Type in "GUEST" for the user name. This will get you to Tyrant, but you have to watch the two videos first. Note: You must use both people; with the "A" scenario with one character and the "B" scenario with the other character.

Getting The Gatling Gun

Successfully complete the game in two and a half hours or less, you can pick up items (only important things such as keys, card keys and maps recommended) but do not save. The gatling gun is an awesome weapon that shoots very fast and is powerful. The downside is that you cannot aim up or down, and it takes up two spaces on the inventory screen. When you start the next scenario in the slot you used, look in one of your item boxes.

Always check a dead policeman. He will usually have ammunition.

In either character's scenario B, get to the police station. Walk out to where Brad Vickers would be to get the special key and look at the ground. If there is nothing there, go back in the station, and do a little more inside, then go out again. You will find a note that Brad left behind.

Complete both of either character's scenarios with an "A" rank, then go to the "Special" option. A new "Extreme battle mode" selection will be unlocked.

Complete both of either character's scenarios with an "A" rank.

Complete both of either character's scenarios with an "A" rank, and Hunk's scenario with any rank.

When playing as Leon go to the gun shop with the man. He will almost shoot you. After he dies because of the zombies, kill them. Then go up to the dead man and press Action. You should get a shotgun. If playing as Claire you will get the crossbow.

Walk into the S.T.A.R.S office, go to the back of the room and click on Wesker's desk (with the "This desk is trashed someone must of searched it" description). Search the desk fifty times to find a photo of Rebecca Chambers as a basketball player.

While playing Leon's scenario, take the unlimited ammunition shotgun and go to the roof where the helicopter crashed. Stand near the door leading inside, and make sure that a close-up view of Leon appears. Aim the shotgun at the screen and fire. Bullet holes will appear. Note: This may also be done at any location where Leon can aim at the screen with the shotgun. Another way to do this is when Leon in the gun shop after the zombies killed the man. Get the shot gun from him and go to the bus that has crashed. Make sure you do not use the shot gun while going to the bus. Once inside the bus, kill the two zombies (on the floor and walking). Go to the back of the bus, where Leon entered, and aim at the screen. In the first scenario as Claire, you can shoot the screen in the hall where the S.T.A.R.S. room is located (where you get the fax). It is not in that room, but it is in that hallway. Keep trying until you get it. As Hunk in the green crow hall where you fight the second Tyrant, go around the second corner in that room. As you shoot at the Tyrant with a shotgun it will shoot the screen. You can shoot the screen anywhere you can point at it with any gun except the grenade launcher, BOW gun, rocket launcher, or flamethrower.

Search the desk on the left side of the S.T.A.R.S. office. The phrase "Its trashed someone must have searched it" will be displayed. Repeatedly search the desk approximately fifty times until a roll of film is found. Take the film and develop it in the photo lab to see a picture of Rebecca in a basketball uniform.

Successfully complete either character's second scenario in under two hours and thirty minutes with saving less than twelve times. Hunk is a soldier that must reach the second floor of the police station from the sewer with just battles and no puzzles.

While playing a game, press Start to display the options screen. Select the "Button Config" option. Highlight the "Aim" selection, then hold R and press Z (10). If you entered the code correctly, the white boxes around ''Config'' and ''Aim'' will change to red.

We have no unlockables for Resident Evil 2 yet. If you have any unlockables please submit them.

We have no easter eggs for Resident Evil 2 yet. If you have any unlockables please submit them.

We have no glitches for Resident Evil 2 yet. If you have any unlockables please submit them.

We have no guides or FAQs for Resident Evil 2 yet. If you have any unlockables please submit them.

Submit a cheat for Resident Evil 2