Use the above links or scroll down see all to the Wii cheats we have available for Resident Evil 4 Wii Edition. 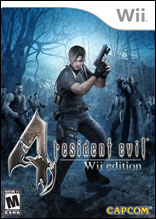 If you need coin shoot the crows for it. Oh it also is good target practice.

How To Kill A Plagashead

The way to kill a plagashead or the ganados with parasites sprouting out of their heads, is to just throw a flash (blue) grenade at them and it will disintegrate and die. This also works on the parasite dogs.

Before you face him buy a rocketlauncher and have your rifle and shoot its eye. Soon salazar shows himself shoot him with launcher.

After you complete the game and upgrade your weapons, save up about 200, 000 or 300, 000 ptas and go to the merchant and sell your upgraded weapons until you have 1, 000, 000 ptas. It takes a while and its a massive loss. But were talking unlimited rockets!

Use the Map to Make Money

To get lots of cash buy the treasure map from the first merchant and find all the goodies and sell them.

When you kill a person and something ops out of their head, use your pistol quickly on it or get a shotgun and use 2 shots. It's and easier way with the shotgun, though.

When choosing the character, hold 1 and press A

When choosing the character, hold 1 and press A.

When choosing the character, hold + and press A

When choosing the character, hold + and 1, while pressing A

When choosing the character, hold + and press A

Get a 4 star rating or higher in the Pueblo map.

Once you beat the game once you will unlock the mini game: Separate Ways.

How To Get The Hand Cannon

Get 5 Stars in all characters in Mercenaries to unlock the hand cannon.

Beat the game on normal difficulty.

Beat the main game once.

Shoot 10 or more blue medallions to get a free specialized gun.

Beat the whole game with Leon on any difficulty.

Complete the game on normal mode with Leon to unlock the Infinite Launcher.

To get a golden egg, find a chicken (or a snake) and wait around for awhile. Do not kill the chickens, or they wont give you one. It takes a while for this to happen, so be patient. You can shoot at them to speed up the process, but don't kill them.

We have no glitches for Resident Evil 4 Wii Edition yet. If you have any unlockables please submit them.