Use the above links or scroll down see all to the Xbox 360 cheats we have available for Rumble Roses XX. 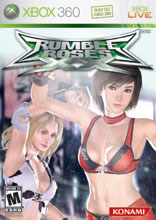 Various bonuses are unlocked when you meet certain conditions, which include the following.

Second Purpose Of The Queen's Match

Set the difficulty to "Easy". Then, set the "H-Gauge" and "Special Gauge" to fastest fill in "Options". Setting these options do not penalize you in any way. Note: This will unlock Gamerpoints fairly fast.

Singles Match To Get To The Title Match

The key is not to play in exhibition mode. Exhibition mode is a waste of time and/or a way to get familiar with how to do certain moves to win the match - without penalty. Go to matches where there is one on one action. The ones to play are Queens, Street Fight, Arena, and Skyscraper. If there are more than two players, back out and go to only one on one matches. You must play all the Roses in order to get to the title match. Be aware that this does not necessarily unlock anything. However it may allow you to play as the alternate player and/or will unlock a costume.

In single player mode, win fifteen single matches without losing, have 100% popularity, and defeat the other nine characters. Exhibition matches do not count.

Once seven characters have held the championship belt, two reward matches will appear sequentially on the arena. If the sixth character to hold the belt was a face character, there will be three reward matches. You must first defeat and unlock their heel alter ego on the Skyscraper.

Play as a character in their unique swimsuit at the Skyscraper, Red Valley, Arena, Street, and Island Resort stages. That swimsuit will now be unlocked for purchase for any character for 9,000 in the shop.

Have each character go to Photo Shoot mode in the locker room to unlock the Maid costume for purchase in the shop.

Win the title with a character then successfully defend it five times to unlock EVA's Gear from Metal Gear Solid 3.

Win the Tag Team belts with Rodeo Drive (Aisha and Dixie) and defend it five times to unlock Nyami's costume from Pop'n Music for Aisha.

Choose a "Singles", "PHM" or "Queen's" match with two characters. This does not work on any match types that involve more then two people. Hold LT and press A at the "Vs." screen. When the match starts the ring entrances of the two girls will be swapped.

Choose a "Queen's" match, then hold RT and press A at the "Vs." screen. The girls will perform an alternate introduction to "Fantasia" song when the match starts.

Play As Non Non The Bear

Play As Sebastian The Clown

Highlight Mistress at the Exhibition mode character selection screen, then hold LT and press A.

At the "vs." screen just before a match starts, hold LT and press A.

We have no unlockables for Rumble Roses XX yet. If you have any unlockables please submit them.

We have no easter eggs for Rumble Roses XX yet. If you have any unlockables please submit them.

We have no glitches for Rumble Roses XX yet. If you have any unlockables please submit them.

We have no guides or FAQs for Rumble Roses XX yet. If you have any unlockables please submit them.

We have no achievements or trophies for Rumble Roses XX yet. If you have any unlockables please submit them.