Use the above links or scroll down see all to the Nintendo DS cheats we have available for Rune Factory 2: A Fantasy Harvest Moon. 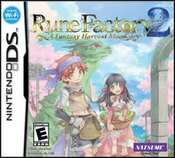 Bringing your father back
After you defeat the final Boss, your son or daughter will want to bring his or her father back from the Forest Of The Beginning. He or she will ask Barret if there is any way to bring his or her father back from the dead. He will say there is a way but he has forgotten. There are four shrines that you have to complete. Each one has a dragon or big Boss guarding four pieces of the puzzle to bring back your father. Before you get to the big Boss, you must go through a gauntlet of monsters for each of the four shrines. After you defeat each monster and the door opens to the teleporter, you will see two switches on the left and right. When you press one of them, your character will either say "I feel some strange power over me" or "Nothing happens". The first response is the one you want in order to continue. Kill the Boss that has one of the four pieces of the book to revive your father. If you select the second response, you will have to do it over again with more monsters until you get the correct switch. After you have all four pieces of the puzzle, talk to Barret. He will take the spell and not give it back to you. Your character will say "I will find a way to bring back my dad and get the book for that spell. " Barret will hide it in the back in the library. It is on the bottom shelf on the left side of the library. Start to learn the new spell. Go to your house, and take a nap. The next day you will wake up and go downstairs. Start to use the new spell to bring your father back from the Forest Of The Beginning. The spell will work, and you will bring your father back. He will say "You didn't give up", and your character will explain that you missed him very much while he was gone. The credits and ending will start. Afterwards, your father will be downstairs by the fireplace, and you can continue playing as your son or daughter.
Building the school
Get 100, 000 gold and 1, 000 wood in order to get the school.
Bachelorettes
You can marry the following girls:
Mana
Birthday: 9 Summer
Likes: Pink Turnip, 4-Leaf Clover, Sashimi
Julia

Items
Items can be obtained from the indicated source at the listed location and time:

Items from wild animals
You can get items from the following animals:

Work from enemies
You can get work from the following enemies:
Goblin Pirates from Blessia can water.
Orcs with maces from Trieste can harvest.

How To Find Some Of The Harder Items

To find the spell Striking March go the Inn and then the room on the far right. Go up to the table next to the bed and Orland will come in and say that you can keep it. After you have Striking March go to the library and on one of the shelves in the bottom corner you find the spell book Inquisitive Waltz. This is needed to find some of the rare and hard to get items in the dungeons. To you the spell you must defeat all enemies in an area and have a tame monster with you.

Marriage For Your Child

As you play Kyle and get married, your child (male or female) then takes control as the main protagonist of the game. Your child can also date other children living in the town, and have an official boyfriend or girlfriend. The child character has a storyline all of his/her own. Here`s who your CHILD can marry: Daughter: Orphas, Rean, and Roy. Son: Kanon, Lamria, Mu, and Su.

Most of the beginning items (such as the axe, sickle, etc.) can be gotten by doing the requests from the villagers. You can start and cancel requests from the bulletin board in front of the fountain in the middle of town.

We have no cheats or codes for Rune Factory 2: A Fantasy Harvest Moon yet. If you have any unlockables please submit them.

We have no easter eggs for Rune Factory 2: A Fantasy Harvest Moon yet. If you have any unlockables please submit them.

We have no glitches for Rune Factory 2: A Fantasy Harvest Moon yet. If you have any unlockables please submit them.

Submit a cheat for Rune Factory 2: A Fantasy Harvest Moon