Use the above links or scroll down see all to the PlayStation 2 cheats we have available for Samurai Warriors. 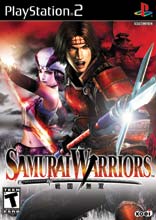 In Kenshin's story, Scenario 3 (Kawanakajima Showdown). Get 1000 K.O.s. A supply unit will show up on the east side of the region.

Have you been looking for the 5 elemental books and other rare items like the saddle's so you can ride on a faster horse? Then i'm here to help. Ok, what you need to do is go to Survival mode and go to the abyss. Pick any character you want. (i suggest you use Keiji Maeda, he's not the fastest character, but he has the attack you need to win). Have you're character's 4th level weapon (For example, like Keiji Maeda's 4th levle weapon the Kagura). It's main attack should be the color red. Any way have you're characters rank at least around 15-20. Then play in the Abyss and destroy every yellow square crate you see (you don't need to look for them they'll be on the path that takes you to the next level or sub-level). And then when you beat the last levle or die save the game every item you have found is you'res to keep.

You can face Lu Bu from the Dynasty Warriors series by reaching the 30th floor in the Abyss level of Survivor mode.

Start game is normal, hard or hell difficulty. Save the game as soon as it starts and change the difficulty to easy. Restart Enemy will attack and block with less frequency.

Collect all five volumes of "The Book of Five Rings" with a created character to unlock Miyamoto Musashi.

Successfully complete the story mode for all characters and have each characters 5th weapon. At the main menu, select Free Mode, and quickly enter Left (2), Right (2), L1, R1, L1, R1, Up, Circle to unlock hidden weapons in this mode.

Successfully complete Story (Musou) mode with any character, then highlight that person at the character selection screen and press Circle. Note: Press Triangle in the Japanese version of the game.

Play as Shingen in The Siege of Azuchi Castle, Shingen's Tale. Thwart the fire attack by defeating Mitsuhide quickly, and then enter the colossal gates. Keiji will appear. Defeat him and a supply captain will appear near the center of the map and move to the gate on the east side of the map. Quickly kill him and pick up the Item he drops. Matsukaze is Keiji's gray war horse, he is very fast, and running into people while riding him does a lot of damage.

If you get 100% (complete every mission) for every character the enemies can have an alternate costume instead of the original.

We have no easter eggs for Samurai Warriors yet. If you have any unlockables please submit them.

We have no glitches for Samurai Warriors yet. If you have any unlockables please submit them.

We have no guides or FAQs for Samurai Warriors yet. If you have any unlockables please submit them.

Submit a cheat for Samurai Warriors