Use the above links or scroll down see all to the PlayStation 2 cheats we have available for Scooby-Doo: Night of 100 Frights. 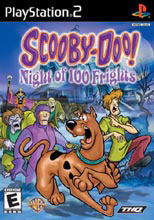 How To Defeat The Mastermind

Once youve unlocked the football Helmet You can Start Killing some freaking monsters baby by ramming them with the helmet or for like the gargoyles you have to jump up and super smash them and the same goes for the ghost of captain moody (the raincoat ghost) The creeper and sea creature and caveman and who knows what else take two hits to beat. The witch as is same for gargoyles.

Falling Down From The Sky

Go where Shaggy fell, by the tree there is a hole right, go in the middle of the hole then do the thunder smash when you do it correctly you will fall where you started.

When your on the roof go down to the gargoyle and supersmash his head. Then jump onto the platform he was standing on, this will take you to the next platform where there are two spiders. Kill them and continue till you reach the Black Knight's helmet. If you collect it then you get his armour.

Location Of The Umbrella

Go to "Gloom & Doom Down in the Tomb" part three and beat the green ghost and you'll save Daphne, meet Polly, and get the umbrella.

Location Of The Helmet

You can find the helmet on the top of the mountain in the level Chills and Thrills on Haunted Hill part 3.

After you get the springs, you can jump on some monsters once and kill them, but on the ghosts you have to leave them alone. The creeper, the caveman, and the sea monster you have to jump on twice!

If you die after getting all the keys and having Shaggy up in the coffins, when you restart the level you can talk to an invisible Shaggy and still have him help you jump and walk around in his arms. You can take him all the way through the level to the doorway.

Ram red switches when Black Knight moves near them.

Daphne will open coffins. When the Green Ghost hovers over an open coffin, Super Slam the switch.

Avoid the white ghosts, then bounce on the ghosts with the rainhats on. Stand next to a corner rope after you defeat the ghost, because Red Beard will throw his sword and cut the rope. Do this in all 4 corners and the treasure chest over his head will kill him.

The Hedge & The Helmet

When riding with Shaggy through the thorny ground, you can sit beside Shaggy and duck under some of the obstacles. This works especially well with the Gargoyles that breathe fire. When you get through the hedge, you have to climb the mountain- and that's where the Helmet is. Watch out for the shaky platforms, falling boulders and the Scarecrows.

Get To Creepy Crawlies In The Hallways

First go to smugglers cove then go to shock on the dock part II. There is a pile of planks near the warp gate. Do a thunder smash on it and then you will get to creepy crawlies in the hallways.

Location Of The Springs

It's located on pier on the pier part 2.

Beginners, when you get to the place where there are 4 floors, the bottom one topples, so if you don't want the caveman to get out of the ice, simply go through the floorboard PAST the ice block and let it slide you down. this skips the fact that you will get pummeled by the caveman's club. pretty clever, huh? Also, some big enemies are able for you to head butt them (run at them) this will make them dizzy for a while but can get back to normal. But the zombies in the hedge maze, unable to head butt.

Change the PlayStation 2 system date to one of the following entries to see special things at the front yard and the mystic playground:

Get Every Power-up In The Game

We have no unlockables for Scooby-Doo: Night of 100 Frights yet. If you have any unlockables please submit them.

We have no easter eggs for Scooby-Doo: Night of 100 Frights yet. If you have any unlockables please submit them.

We have no glitches for Scooby-Doo: Night of 100 Frights yet. If you have any unlockables please submit them.

Submit a cheat for Scooby-Doo: Night of 100 Frights