Use the above links or scroll down see all to the PlayStation 2 cheats we have available for Silent Hill 3. 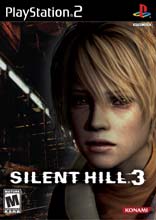 A way to start off the game quick and easy instead of having to do all of the otherworld mission at the beginning is to walk beside robbie the rabbit, go to the edge of the bench, and walk to the right. You will fall off a cliff, instead of doing the first quest and/or dying by monsters.

After using the key to unlock the front door to the bookstore, directly to the right in the isle will be red books on the floor. After picking up those books, besides the roman numerals imprinted on them there are also numbers half visible that need to be combined. Previously whoever wrote the cheat gave incorrect info. Now the correct code to the door behind the counter, while game is in normal modes, is 4852 type that in and the door will unlock and you'll be on your way.

Equip the handgun and fire two shots. One should be fine, but fire two just in case. After Claudia bends over, equip the Maul (spiked mace) and do the overhead attack by pressing X hard. Since you will be invulnerable when Heather swings the Maul, Claudia will not hit you with her Retaliation smack. Note: Even though the swing is slow, Claudia will just wait for it.

Order Of Tarot Cards At The Last Door Of The Game

Arrange the cards as follows on the normal action and normal difficulty settings:

The riddle is a problem with Roman numerals. The Priestess is number II (2) as read on the book about tarots. The Eye Of The Night is XXII (22). The Fool is 0. The Moon is XVIII (18). The Hanged Man is XII (12). Look in the book of drawings to see that XVIII can stay only in the east position (the last letter is I instead of L); XII is only in the southwest position; II is only in the northwest position; 0 and XXII have two places where they can stay. Swap them until you find their correct place.

For sub machine gun ammunition, go to the hospital roof.

After hospital changes to bloody mode, you can go to the 33rd floor. At the top of the room is a stony picture on the wall . This picture shows you the order of the digits. For example:

Where the digits are indicate the number of beds that you see bloody. The solution is 8 2 3 7, on the normal action and normal riddle difficulty settings.

The solution on the hard riddle difficulty setting is 9 2 7 1.

When the intermission sequence between Claudia and Vincent is finished and Vincent dies, use the necklace on Claudia.

Getting Gold And Silver Pipes

In the place where you use the dryer to kill off some tentacles, walk to the water. Make sure you do not fall and press X. Answer the questions correctly to get it.

Once you unlocked the following Special weapons they can be found at their respective places:

You can find a shotgun is in the subway and a machine gun in the hospital. The best weapon for last battle is the katana.

Equipping the Princess Heart or Transform costume will make Heather run long distances without getting tired. This is also useful for the Heather Beam weapon, since it depends on how tired Heather is.

To get extra scenes while playing the game, use a memory card with at least one finished saved game file from Silent Hill 2. New interactions with some objects and new scenes will now be available. These scenes are similar or with some type of reference to the previous game. For example, Heather trying to look for something stuck into the toilet in the mall.

Kill all monsters with any weapon except melee ones, preferably the unlimited machine gun (a special weapon).

Successfully complete game and unlock the Princess Heart costume and the Heather Beam weapon. The Heather Beam is a special weapon which you can only use if Heather or Cheryl is not holding any weapon. Defeat all monsters and Bosses using only the Heather Beam. Note: The "Monster defeated" counter should read 0 kills.

Successfully complete the game, then highlight the "Extra New Game" option at the main menu and press Up(2), Down(2), Left, Right, Left, Right, Circle, X. If you entered the code correctly, Heather will sigh after you choose a difficulty and riddle level. In some scenes when you see Douglas, he will be wearing his underwear.

To use the bonus costumes, you must first complete the game once and unlock the "Extra Costume" option. Enter one of the following case-sensitive passwords and you will be prompted for that costume. Once entered, you can then equip them during the game.

We have no unlockables for Silent Hill 3 yet. If you have any unlockables please submit them.

We have no easter eggs for Silent Hill 3 yet. If you have any unlockables please submit them.

We have no glitches for Silent Hill 3 yet. If you have any unlockables please submit them.

Created by: Chesh the Cat. Read the full guide...

Submit a cheat for Silent Hill 3