Use the above links or scroll down see all to the PlayStation 2 cheats we have available for Sly 2: Band of Thieves. 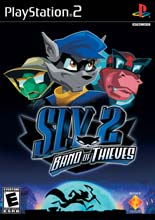 Third hint on how to defeat Klaww Gnag members.

Playing as Sly, you'll have to defeat the Contessa. While you play as Sly, you also switch to Bentley to take out Neyla's air forces, and Murray to destroy Carmelita's tank. Hit Contessa with your cane, and watch out when she runs and swipes at you. Use 'shock therapy' from the electric cane power-up (via the clue bottle safe from Rajan's safe in level 3) if you have it. If you knock her off, she'll use a web to get back up (careful, she'll sometimes take you down with her). Destroy her 'babies' when she 'hatches' them. Be careful of her hypnosis beam when she uses it (even when she does, you can still hit her). Do this, and you'll get the eyes.

Where To Find The Most Valuable Possesions

When you come out of the safehouse around the area should be valuable treasures but you have to keep it in one piece and if you want to pickpocket then your target should be the big tough guards they keep alot of loot that you will find useful.

This is a series of hints on how to defeat the Klaww Gang members.

To defeat Dimitri, he'll first fire two electrical shocks at you. Hide behind the green barrels or a glass wall to avoid them. Then he'll short circuit, and then you have to get to him---but be fast, he can recharge if you're slow and hit you. When you get to him, smack him with your cane, and repeat this until you defeat him. Run away to get life if you need it. Follow this and you should defeat him. After you do, he'll run away to his forgery machine and Sly will smack him up into the machine, then he'll fly out and land in a barrel.

Second installment of my series of hints on how to defeat the Klaww Gang.

To defeat Rajan, you'll be playing as Murray. Be sure you have Fists of Flame and Juggernaut Throw. Use the Fists of Flame to cause more damage and push him towards the electrical field. When he swipes with his cane jump to avoid it, and be on a lilypad when he causes lightning. When he calls his minions, pick one up and throw him at Rajan. You'll knock him out cold. At this point, you can A. Cause bigtime damage since he's sleeping, or B. Pick him and throw him at the fence! (Yeah, you can pick him up). Do this and he'll be gone in no time. In the end though, Neyla betrays you, Murray hides the heart, and the Contessa puts Sly, Murray, Rajan, and Carmelita under arrest.

When pickpocketing look for guards that have a shiny pocket. Then pick that guards pocket until you get some loot. Then the loot will be turned into coins. The farther you are in the game the more the loot will be worth.

On Level 6, there are a few bear dens and if they spot you, they will kill you. To kill them, you'll need to buy "Trigger Bomb" power-up and find the bear you wish to kill. Have him chase you to the docks in front of your safe house. Get on the front of the right boat and throw 10 trigger bombs at the bear. This will kill the bear. Although, enemies reinforcements come when someone is killed in the area you just left, so this applies to the bear enemies, too.

Double jump as Murry and do the thunder flop. It should be more powerful.

After you beat all of the levels go to the 1,3,5,6,8 wait 5 seconds and when the badge appears in the corner click square.

How To Defeat Dimitri

Dimitri will fire two shock pulses at you. when this happens, hide behind the green juice barrels. When Dimitri tires to fire his third shock pulse, it short circuits. At that time move try to strike him four times. He will fight back with a tail spin and then he will continue with the shock pulse routine. Follow through with your same routine and all will go well.

If you are looking for the secret bottles to a level, wander around until you hear a clinking noise. Then go in a certain direction. If the noise stops, turn around and go a different way. Try this as many times as you need until the noise stays. At this point keep following the noise until you reach the bottle. **Note: Sometimes the bottles will be above or below you so look around.

To defeat clocklaw the first time with the tailgun on carmelita's helicopter, Clocklaw will shoot missiles at you. Shoot them once to destroy them. Soon he will send out stronger blue missiles that take 2 shots to destroy. Then he will send out shock circles. Shoot the side of the rings once to open the hole without getting shocked. Clocklaw has a Special move that he does rarely, but takes a lot of health away from you. After you take about all, but a little bit of health, he will take the safehouse with bentley and murray. You will need to jump across many obstacles in the sky. The move Feral Jump will help you along with the Paraglider. After you get to Clocklaw, You will need to smash his head. (Easy)

Sneak up on an enemy, then press Triangle three or four times. While they are still in the air, quickly jump and press Square while in the air. If done correctly, you should defeat your enemy.

After Murray gets down in a pit to fight Rajan, Rajan starts to swing his cane at you. First he'll swing his cane from left to right,you jump over this but press the jump button only once. Then immediately he'll thrust his cane from top to bottom, then you jump to the right to complete the double jump. Think "Jump,Jump right", then you can beat him up. But watch out when Rajan electricutes the ground, when this happens hurry up and get onto a lily pad.

First with Sly, you will have to jump on the big rock. Then jump on the pointy things by using your ninja spire jump (X button then O button). Watch out for Rajan's thunder. Once you get there Rajan will knock out Sly. Then with Murray you will have to fight Rajan. You should use the Triangele button to knock him into the electrical wall or if you Fits of Flames hit him to knock down his life. Then after Rajan's life is down some what, he will send out some minons. This is your chance to get more life. Defeat some of his minons until your life is full. Then go back to fighting Rajan. Just keep on fighting Rajan and you finally defeat him.

Pick as many pockets as possible! Bentley can sell the "loot" on ThiefNet and can purchase some really cool power-ups -- some that make later jobs alot easier.

You will hear a "clinking" noise when you are near a Message Bottle. Sound will be louder the closer you get.

Unlock All Power-ups For Sly, Bently, and Murray

Go on to your file, and press "Start". Your should see the pause menu (The one that has the Resume/Save and Quit/ Option). Press UP, DOWN, LEFT, RIGHT (NOT on the Analog stick, the other buttons). Then press SQUARE, TRIANGLE, X, CIRCLE, SQUARE. Then once you resume the game, when an enemy attacks you, you get hit, but do NOT lose health.

Pause the game and press: Down, up, left, left, R1, right. If you entered the code correctly, you will hear a sound. This Cheat allows you to go to all episodes and to buy all gadgets.

Pause the game and enter: Up, down, left, right, x.

Pause the game and press down, up, left, left, R1, right. you are then taken directly to chapter 8. You are now able to play in any chapter and purchase all the power-ups.

Pause the game and press Down, Down, Up, Down, Right, Left.

Press start and enter: DOWN, DOWN, UP, DOWN, RIGHT, LEFT. Time rush will be available when you press select.

On the D-pad press left, left, down, left, right.

To go really fast to avoid enemy's hit these buttons really fast: down, down, up, down, right, left.

We have no unlockables for Sly 2: Band of Thieves yet. If you have any unlockables please submit them.

Go to Episode 7 and go to the room where you do "Laser Redirection". Die. Then you'll appear where you started and the laser will be down! Counting this one, all missions you've done after it you'll have to re-do! I was playing it and got the safe, though the guards weren't too happy with me.

Submit a cheat for Sly 2: Band of Thieves