Use the above links or scroll down see all to the PlayStation 2 cheats we have available for SOCOM 3 U.S. Navy SEALs. 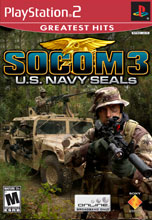 Go to the mission Friend or Foe in South Asia. When your reach the second village, complete the the two objectives first. Then go into the village and kill all the terrorists, and then find the out house. When you stand next to it, you will hear a terrorist inside it talking and read the subtitles because they're pretty funny.

If you want to maintain your stealth, follow these tips:
1. Put a suppressor on your gun and don't put a laser pointer on.
2. If you can sneak past an enemy without him noticing, do it and don't kill him either (even though it'd be fun).
3. If your about to kill someone, look around if there's someone near him first.
4. If sneaking by an enemy, always go prone so you would be less visible and quieter.
5. If there are to enemies near each other, kill the guy behind the other.
6. Remember to hide the bodies!
If you follow these tips, you should be able to maintain stealth.

Get a Stealthy gun with suppressor 1. And get a thermal. Then as you already jump that gate, Stealth kill the driver. The other guy will suddenly start to drive the boat - kill him then you will not get caught. If this does not work kill the guy with the gun.

If you are on level friend or foe, and you are at the place where there are guys that are making guys get tortured for betrayal. Then you have to get a flash bang. After that, throw it at those 4 or 5 guys and, they'll all surrender. HINT: Some of the terrorists kill their own guys if they surrender.

Play the mission where you have to escort a friendly and get information from villagers. Once you get the information from the second person, silently kill all terrorists in that village. Then, sneak up on the outhouse and sit in front of it. After about thirty seconds you should hear a terrorist scream "Oh God -- how can you be constipated and have diarrhea at the same time?". Additionally, if you wait long enough at the overview briefing of any mission, Fireteam will begin to make fun of the mission or those involved.

To use quick command in single player missions in S3, follow to below information.

If you aren't even sure what the Ghille Suit is used for...read. It's mainly used for sniping. You could snipe in it and not be spotted so easily by people with the worse attention span. Silencing your sniper rifle will also help you stay hidden from enemies. Note: The ghille suit adds on a lot of load and it can make you run very slow so it wouldn't be a good idea to have a rocket launcher or anything with you. So don't take so much with you; the ghille suit takes the space of an extra weapon (grenades, mines, etc.).

Isn't it annoying trying to shoot somebody with the cannon on your tank? Especailly when they get way too close? Just switch to the machine gun if it's open and blast away. You'll kill them fast, if you are an accurate shooter. And if you are getting shot while on the machine gun, switch back into the tank (that's if the tank isn't full). It really helps and it gets rid of the frustration. ALSO it would be good if there was a driver while you are doing this. He could be running people over at the same time.

Unlocking The Ghille Suit And Other Characters

To unlock the Ghille Suit (a sort of camo that blends you in with your surroundings) and other chracters, you must beat the game on Commander difficulty or higher. You get different chracters for different areas of operations you beat.

Beat the single player on admiral difficulty to unlock these two powerful assault rifles for online play. Note: STG 77 is for the Terrorists and the IW-80 A2 is for the SEALs.

Getting The Med. Scope And Front Grip

In game mode pause and press R1, R1, R1 and you will get unlimited heath when you go back to the game.

We have no unlockables for SOCOM 3 U.S. Navy SEALs yet. If you have any unlockables please submit them.

We have no easter eggs for SOCOM 3 U.S. Navy SEALs yet. If you have any unlockables please submit them.

SEALs: (Suppression Only) After you spawn inside the palace go to the ladder next to the doorway and climb but not all the way to the top. Slide down and move to the locked door to the far right of your spawn only using the left thumbstick. Dive into the door and you will slide right through and you will be outside of the map and you can go anywhere in the map as if you were playing Demolition or something. So try it out and piss every one off online

How to get past 1st level

Created by: The Sonic man!. Read the full guide...