Use the above links or scroll down see all to the PlayStation 2 cheats we have available for SOCOM II: U.S. Navy Seals. 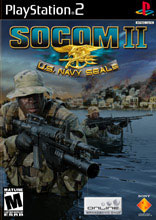 Start with an M60, Mark 23 , 2x ammo, and some grenades. This is a rescue mission so you don't need silenced guns. Tell Bravo to run to Echo, make shure able is following and follow brovo. Once they get there tell bravo to follow and go to the wall af the embassy. Walk along the wall (left of the front gate) away from the gate until you see a piece missing from the top. Go under it and climb over(make sure your team gets over because sometimes they get stuck). Go through the front door and up the stairs to the left. The first embassy worker is there. Restrain him and tell him to follow you. Turn to your right and go around till you are at the top of the other stair case and take a left. Restain the woman and tell her to follow you. Take everyone to the roof. when you get to the the doorway onto the roof take a left, go up the small staircase and into the right corner. Get the embassy workers as far as you can and tell them to get down. Aim towards the small staircase and shoot anyone who comes up.

On the Embassy level just after you restrain the two hostages, make your way up to the roof. Secure them in a safe place, and stand in front of the door. When the first set of enemies come up, throw in a couple flashbangs. When they give up, do not shoot them, but rather wait a little while. Some more terrorists will come up and kill the guys that gave up. After a while some terrorists will run around the embassy, but they will not kill you. Instead, they will attack their own men.

How To Get A Fully Auto M16A2 Online

To get the terrorist weapons; all you have to do is beat the game on lieutenaut.

Beat the game on Commander difficulty setting to unlock the level select. After you do, enter the campaign as you normally would and you will have to choose from one of the four locations. After you enter one of the locations, choose one of the missions.

Heres an easy way to beat the embassy level. After you restrain both hostages, bring them both to the embassy roof. When you reach the top of the stairs go out the door and to your left. You will see what look like a power box. Put both hostages back there so they can't be picked off by snipers. Then stand in front of the door facing the stairs and shoot the rebels as they come. I Recommend a rapid fire gun, like an M4 of an M60. When Wardog says somethibg about snipers, just scan the rooftops around the embassy about every 45 seconds. Good luck!

Successfully complete the game under the Commander difficulty setting.

Successfully complete the game under Ensign difficulty setting. You will also get the 12 gauge pump shotgun and the semi automatic shotgun.

Successfully complete the game under the Commander difficulty setting.

After meeting with the informant Mallard, go to the largest section of ruin just past the building that you met him in. There should be a guard patrolling it and a few boxes of ammunition lying around. Once at this ruin, turn left so that you are facing towards the road that connects to the bridge. There should be a small section of wall, on which a SR-25 SD is located. Getting this weapon will allow you to kill the guards and the sniper in the watchtower easier, which should prevent the alarm from being raised.

We have no cheats or codes for SOCOM II: U.S. Navy Seals yet. If you have any unlockables please submit them.

We have no unlockables for SOCOM II: U.S. Navy Seals yet. If you have any unlockables please submit them.

We have no easter eggs for SOCOM II: U.S. Navy Seals yet. If you have any unlockables please submit them.

We have no glitches for SOCOM II: U.S. Navy Seals yet. If you have any unlockables please submit them.

Created by: Half Life†. Read the full guide...