Use the above links or scroll down see all to the GameCube cheats we have available for Sonic Riders. 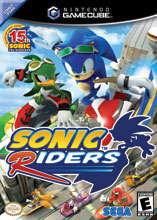 How To Unlock The 3 Missing Characters

On sonic riders, after you beaten both story modes, you will have 2 missions. Beat the 2 missions and a 3rd mission will appear. Defeat the 3rd mission and you will get all three unknown characters on your character subscreen.

To unlock these three characters, beat all of Jet's, Wave's, and Storm's missions.

Ultimate Knuckles is power and flying. All you need is knuckles and the magic carpet or the acsess board. I prefer access board because it is cheaper and knuckles does not look good on a carpet. Right?

When you land after the first ramp go through the passage way on the far right (it's easier to get there if you have power in the game) towards the end of the path there will be a big opening on the right, turn and go into the opening. It saves more air.

Earn Rings Easily And Faster (only Works On 1 Player)

In order to do this, you must have the magic carpet. First, go to free race. Choose the rule setting. Set the laps to 1. Then, go to Sand Ruins and select any power character (I recommend Knuckles because he is faster than other power characters), then choose the magic carpet for your air ride. If you don't have it, buy it in the store. If it's not there. Oh well. As you start the race, keep going straight into the first power short cut. Then, once you are out, go to the up coming fly short cut and go through ALL the fly rings. You will go onto the higher section of the track and will come across a 100 ring capsule. Get it, and finish the race without falling. Repeat this step repeatedly and have many rings!

The maximum rings you can get in a race is 100.

In Metal City, do a front flip off the first jump so that you land on the second level passage. On the straightaway, go to the left side. You should see an item box with 100 rings. You have to jump to get it. It takes you straight to level 3!!

For those of you who are ticked off that Shadow doesn't have a matching air board, think again. Once you earn enough rings go to the shop and buy the Power Gear. It's an amazing board: great speed, dash, turn, and cornering... plus it matches Shadow's colors.

To ride the taxi, you need to get into the place with the sign that reads "Crazy Taxi." Then go behind the giant arrow sign. You will jump inside the taxi and ride for a little while.

When you beat Sky Road (Team Babylon Story Moad) don't think that its over. You have to battle the gaurd of babylon garden. The Only way to beat him is to hit the vase under him 3 times use dash to catch up, and heres a shock your Sonic well good Luck

In splash canyon right before you do the big jump (before you cross the finish line)press down on the remote controller and it will send you up high and will ride the Rainbow ride for about 5 seconds.

If you play World Grand Prix in Normal Race and you get your high score, a bronze medal will be near your charachter's name once you finish, then you will be awarded 300 rings. (spend wisely!)

To unlock the Babylon Story, complete the Heroes story.

To unlock the stages SEGA Carnival and SEGA Illusion.

To unlock these two stages, complete the Babylon story.

On the character select screen, press the R button to select a random character.

To unlock Super Sonic, get all gold emblems on Mission Mode. On the character select screen, one of Sonic's vehicles is a chaos emerald. Select that to use Super Sonic.

Once the race starts, press B as fast as you can.

We have no cheats or codes for Sonic Riders yet. If you have any unlockables please submit them.

Get a gold medal for Heroes Cup of the World Grand Prix.

We have no glitches for Sonic Riders yet. If you have any unlockables please submit them.

How to get the 100 ring capsule in all "Hero" stages

Submit a cheat for Sonic Riders