Use the above links or scroll down see all to the PlayStation 2 cheats we have available for Soul Calibur III. 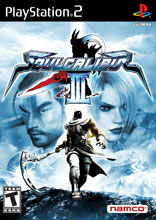 Go to the guy named Zasamel and change different costumes the bad thing is it doesn't always work. He could change to NightTerror, Charade, Charade2, Charade3, Lizardman(SC2), Lizardman(crown), Lizardman(Mask) and many more.

This can be done with Yoshimitsu. As you start the battle, perform the DeathCopter. While performing the DeathCopter, perfom the DeathCopter Trick. If done right, you will not only down the enemy, but also get behind him. Quickly perform a DeathCopter again, only this time end it quickly by pressing down. If performed correctly, the opponent will not have enough time to move out of the way and will be attacked and downed again. Repeat the process until the opponent is defeated.

The only way to damage Keres is with a counter hit (a hit while he is attacking). Since Keres uses a lot of throws, a good method is to use your character's crouching horizontal move. You should deal more damage to him than he does to you. If this does not work, add in evasion and defense but remember that Keres can only be damaged while he is attacking. Also, Keres does not stagger when you hit him.

How To Get A New Weapon For Any Character

First you go to Tales of souls then pick the character you want then beat it twice but you have to pay attention after you beat the game the first time it will have a clip and then tell you to press some buttons remember what they are and the second time when you get to the video if you press the right buttons you get a new weapon (only works once).

Go to the Standard Character Color Edit and select a female character (or certain male characters). Select any weapon and when the screen fades to black, press and hold L1+L2+R1+R2. You should hear a sound confirming the entry has worked once the screen returns. Now you can edit the color on a fourth article of clothing. This only works with some outfits on some characters only.

First you will need to have Olcadan, Yoshimitsu, Lizardman, Cervantes, Sophitia and Rock, after use any character at all in tales of souls and once you beat it you will have unlocked Abyss.

For any character you want hidden weapons for, just beat their Tales of Souls twice

In Chronicle of the Sword mode you can get new weapons with your created character. Every 10 levels you go up you get a new weapon. When you reach level 30 you get a weapon that a standard charcter has like Tira or Zasalamel.

Pick a character in Soul Arena. Pick any arena you want to play in. Then when your attacker is on the ground (or he/she isn't close to you) press L1 and R1 at the same time and your person will do a taunt.

Go to practice mode and select character, go to tutorial and complete all for his little challenges. Once you complete them you get that ancient weapon for that character. note: The ancients have there own special power.

During Tales Of Souls mode there is a way to unlock items by dying.(Odd yes) First off get to the 5th match. Then Die 5 times. Sometimes you will unlock some items in the stores, sometimes not.

In Soul Arena, there is a mode called Soul Smash(Atleast I think so.)You have to smash your enemy into the walls of the cage. The best character to use is Nightmare. The farthest you will throw you oppenent with him, is if you use the vertical attacks.

We have no cheats or codes for Soul Calibur III yet. If you have any unlockables please submit them.

Defeat Rock in Tales Of Souls mode or play 475 battles to unlock him.

We have no easter eggs for Soul Calibur III yet. If you have any unlockables please submit them.

We have no glitches for Soul Calibur III yet. If you have any unlockables please submit them.

We have no guides or FAQs for Soul Calibur III yet. If you have any unlockables please submit them.