Use the above links or scroll down see all to the GameCube cheats we have available for Spider-Man 2. 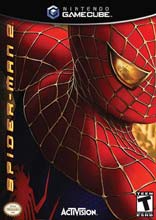 If you look on the mini map and find a group of buildings with a hole in it go to the hole. Fall in and look around the groung to find 1 of the 75 secret tokens.

The First Day Of The Rest Of Your Life

If you defeat Dr. Octopus for the last time, you get to see the ending movie, the credits, and you open a new chapter. In this chapter, you have only 1 thing on your to-do list: earn 50,000 hero points, so help as many people as possible. You can also get the level 7 swing upgrade, the movie theater, and the fight arena from the spidey store. If you get the 50,000 hero points, you open the final chapter cleverly titled:The Second Day of the Rest of Your Life. All there is left to do is to buy the level 8 swing upgrade for 50,000 hero points.

At the News Conference, chaos happens. You must save all 6 reporters from Mysterio. First, save the two reporters that are hanging from balconies. Press "Y" while on the balcony to grab them and swing back to the balcony which you started out on. Drop them off there and defeat the aliens that are flying around with a couple presses of the "B" button. Then, get the 4 reporters on the stage near Mysterio. Swing your way back to the balcony with the exit with them.

To defeat the Rhino, make sure you dodge his attacks. To do this, when your head flashes, press the "X" button to dodge his attacks. Then, when he's done with his attack that you have dodged, he'll become dizzy and you can attack him with the "B" button. Continue this until you defeat him.

If you want to run on the wall (Wallsprinting), swing toward a building while holding L. Let go of the web so that you fall. (Do this from a high building for longer wallsprinting) Still holding L, hold X. You should start running immidiatly.

When near a flag pole, jump and press the X button to spin around it. Continue to hold down the X button for 5 revolutions and Spider-Man will sit on the pole.

This happened when I was fighting a bunch of thugs in a gang war. First make sure you have thug hanger upgrade. Then make sure your surrounded by thugs. When surrounded start the thug hanger combo on an unconsious thug. Another thug should hit you and stop you in the middle of the combo. The glitch is you'll have an unconsious thug tied to your arm you can still do everything like before such as crawling, swinging (even the slingshot trick), you can even turn around and beat him up if you want. To get rid of him either die or fall in water.