Use the above links or scroll down see all to the PlayStation 2 cheats we have available for Spider-Man 2. 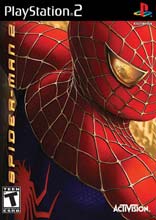 Go into the dailybugle and as you walk in turn left and look on the wall, there will be a newspaper hanging up on the wall that says Holy Cow!

If you just want to go through and play they entire game instead of doing the cheat where you already have 100% done, do this for easier hero points. Just go somewhere by the shore and talk to someone for a mission. Then you can hope to be ambushed and just swing everyone in the water. If they always avoid your webs hit R2 and triangle to trap them then swing them.

Play As Kermit The Frog

First get 100%. Then go to liberty island and jump into the water on the south side of the island 25 times in a row. Then climb onto the Statue of Liberty's torch and there will be a change icon. Hit square when on the icon and you will transform into Kermit the Frog.

To play as Doc Ock, complete 100% of the game. Once this is done, go to the bridge leading to Roseavelt Island. When you reach the island, at the back of the factory/warehouse there is an icon to change between Doc Ock and Spiderman.

You will have to start on top of a tall building. Try to be as close to Liberty Island as possible. Look towards the island and you will eventually see two helicopters that cross paths with each other. Watch for the one that flies towards you. You will need to jump up when it is overhead and snag it with your webbing. This copter will take you out over the water. You will eventually cross paths with another copter when you are about halfway. Jump and hook onto that copter so it can take you to the first island. From this island you will need to take one more copter that will deliver you to the Statue of Liberty. It may take a few tries to get it right.

Shockers hide out is located at a big warehouse by the shore at the lower east side. There will be a big metal garage door and it will open when you walk up to it.

Bug Crawling On My Face Reference

Swing around the city until you find a billboard of mary jane, then press circle and start crawling on her face. Its a reference to a spider crawling on you.

Go to this random skyscraper (make sure its high) and jump off. You will probably live, if you do I suggest you go to a HIGHER skyscraper then jump off you will die cause its a skyscraper but if you go to a high skyscraper you might find a medal or something.

Easy Way To Get Skyscraper Tokens.

Go on top of a high building when it's dark and you'll see the coins glow.

To stretch your webs hang from a helicopter then push r2 but don't release it. You will hang between the building and the helicopter will keep going.

First you have to help a person with a boat sinking and then when you got the last person on the boat don't drop him off just take him to any building you want but don't take him on a very tall building.

By central park look for a building that has a red covering over it, it's a jewerly store. Go by the counter then look to the left then you'll see a married couple.

How To Beat Ryno

When your fighting Ryno your web won't work on him not even your punshes (just yet). Ryno only has two attacks one is his charge attack. Just jump when you see it coming. When he trys to use his spin attack and your spider sense is tingleling keep taping the circle button until Ryno gets dizzy. While he is dizzy start punshing him. Ryno will soon gain conscios keep repeating what you did to damage him. He will be beaten in NO TIME.

If you are in a situation when you need to chase someone, or just swingin' around waiting for something to pop up, you can swing faster if you would like to. Just press X, X while your swinging then, you will swing faster!

You know when your facing those ax-at-hand clowns at Mysterio's lare and it takes just forever for them to attak so you can counter attak ? Well I found an easier way to kill them. When your fighting the three of them, just grab one with your web and swing it around. Eventually a different clown will land on the swing'n clowns ax and pop. When only one is left just counter attak it.

You can find ShutterBugs in your award screen in the pause menu. There is a total of forty rewards: Complete all Daily Bugle missions(6).

Play As Spider-Man Without Mask

As many will find out, in the final battle Peter fights without his mask. To play as Spider-man without his mask first obtain collect all hint markers, and complete the MJ missions. After this has been done go straight to Peter Parker's apartment. You will then need to stand inside the apartment and wait until he crosses his arms. After more waiting Parker will stretch. At this point a cutscene would activate and Parker will remove his mask. After he removes his mask you are free to leave the room and continue on with the game. To put back on your mask, simply have Spider-Man die (drown, get beat up.)

During the final battle with Doc Ock, you must locate all of the 8 switches.

Do you know that upgrade you buy where you hang a thug on a lamp post? Well no longer do you have to push, square square traingle X, just push, Triangle X and it will do it. So you don't have to push the extra buttons.

Easter Egg:Reference To Lizard Being Removed From The Game

In Pete's apartment (located in West Village, white on your map, enter the lower center balcony), above his desk, there is a little bulletin board. On this board is a bumper sticker which reads, "Sometimes you plant the seeds for trees you will never sit under. Directly to the right of this is a picture of the sewers

You can out run cars on foot, but if you get on top of any moving cars, and sprint on the hood of the car, you'll just hear alot of footsteps. You wont run off the front, unless of course you fall of the side, you have to keep your balance or this glitch wont work.

A Day In The Life - Secret Stuff

QNick's Guide to Defeating the Bosses