Use the above links or scroll down see all to the Xbox cheats we have available for Spider-Man 2. 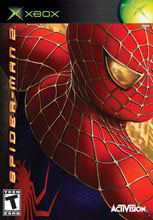 You know how the tour guide tells you to swing stylishly? Well it kind of means to swing using tricks. Do you know what I mean? Try not to swing all plain and boring.

When you get to place where Beck is, start using the grapple on thugs. Throw them into the green pit using the B button. Then Beck will tell you what do next in a cut scene.

If you look at your mini map, most of the buildings are tan. Any red or blue building is one that you can enter, but only if it's open. Walk right up to the door. If it doesn't open automatically, try again later when it's open. Most of these buildings will have hideout tokens and/or thugs inside, but not all.

When near a flag pole, jump and press the B button to spin around it. Continue to hold down the B button for 5 revolutions and Spider-Man will sit on the pole.

We have no glitches for Spider-Man 2 yet. If you have any unlockables please submit them.