Use the above links or scroll down see all to the Nintendo DS cheats we have available for Star Fox: Command. 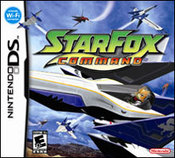 See What The Fleet Contains

When you see a fleet/group of red dots that move towards the Great Fox. When you see them, press A on them and it will tell you what type of enemy, their attack, and their defense/health

Pigma from starwolf is now a metal box. Shoot his four panels until they all match showing his face. A red core will appear. Shoot the core as much as you can before it is covered. Repeat this until you defeat him.

This game has nine endings. These endings will depend on which paths you decide to take along the way.

The first thing you do is shoot off the tanks on each side of the satellite. Then you will shoot the middle of the top area until the satellite has too much pressure and sinks into the lava, but it will keep coming up so you'll have to repeat this. You can't lock onto this area and it has no certain glowing spots to shoot. Repeat this until you defeat the boss.

In most levels on the touch screen there will be fog hiding enemies and useful items. Use your stylus to clear fog. Fog will come back on every turn. You can not clear all of the fog on one turn.

We have no cheats or codes for Star Fox: Command yet. If you have any unlockables please submit them.

At first you can only take the paths that don't have a lock next to them. Then after you finish the first ending you'll receive the key allowing you to access new paths along the game thus getting new endings.

After you have done all of the endings the music from the original Star Fox will play on the main menu.

James McCloud is Fox's dead father. You can play as him when you fight the Emperor Anglar in the "Dash Makes a Choice" level in Venom.

We have no easter eggs for Star Fox: Command yet. If you have any unlockables please submit them.

We have no glitches for Star Fox: Command yet. If you have any unlockables please submit them.

We have no guides or FAQs for Star Fox: Command yet. If you have any unlockables please submit them.