Star Ocean: Till the End of Time cheats & more for PlayStation 2 (PS2)

Get the latest Star Ocean: Till the End of Time cheats, codes, unlockables, hints, Easter eggs, glitches, tips, tricks, hacks, downloads, hints, guides, FAQs, walkthroughs, and more for PlayStation 2 (PS2). CheatCodes.com has all you need to win every game you play!

Use the above links or scroll down see all to the PlayStation 2 cheats we have available for Star Ocean: Till the End of Time. 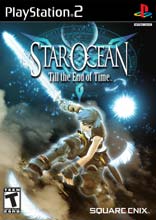 Go to Gemity, and go to the Runic Chess Game. Set the setting at Advanced Level S, and win as many times you want. When you win you will get the prize. Go back into the town part of Gemity, and sell all of the things. Every prize for Advanced Level sells for 100000 Fol.

When you're already off to save Nel, spend some time around the grounds in Kirsla where there are Bandits and Horsemen. Keep on fighting them using Fayt and Cliff. Once you've received a triple exp bonus, remove Cliff OR Fayt of your team (in the tactics menu) and let them fight solo. The triple exp will help your character receive 200+ exp per battle. You can switch between characters anytime to keep the party balanced.

To get the Crimson Scourge you must have Albel to use it. You must finish the main story first then enter the Airyglyph Castle and approach the king's throne on the 2nd floor. Like Nel's Blades of Ryusen, Albel will equip the Crimson Scouge automatically. It has a special ability to double every physical attack and is the most powerful weapon at this point so make sure you get it.

Battle enemies in the Sphere Company on floor 176. Fill up the Bonus Battle Gauge and have it on Triple EXP. Use the Combat Training skill to raise EXP by 40%. Refine and equip 2 Rings of Erudition for 40% more EXP. If you want to level up 1 person, fight alone as you get more EXP.

Completing at least 45 battle collections lets you select one extra outfit for your character. The more battle collections you complete the more outfits you get. To change, go to the status screen in the camp menu keep pressing triangle until you get the one you want.

Go to the Traum Mountains then look north at the end of the Airyglyph bridge to spot a snowman.

You can unlock extra costumes for each character in Versus Mode. To get them you must search for treasures throughout the game that have trading cards in it. On the character select screen, you can select the different costumes you unlocked by pressing the Square, Triangle, R1, or R2 button.

After you beat Iseria Queen in Sphere Company 211 go to Crosel's room in the Urza Lava Cave to battle Freya, the final secret boss.

After beating the boss on the 3rd floor of the Cave of Trials go down the stairs. You'll end up on the 1st floor. Go north then east to find an elevator. Choose to go to the 3rd floor again and this time you'll meet a guy named Santa. He sells all the inventing materials except synthesis. If you have enough fol, he also sells really valuable stuff. You can go here anytime you need some materials.

Once you beat the game and your file says clear, go to the southwest corner of Kirlsa, down the stairs, and into the new discovered tunnel. Use the Ring of Disintegration to clear a wall that's blocking a teleporter leading to The Cave Of Trials. There are no save points here so backtrack to Kirlsa when needed to heal and restock on items.

Level up Cliff to 30. You'll get probably one of his best moves called Fists of Fury. Give him that move and when he uses it the Heat Up Gauge fills up faster, along with a lot of damage done to the enemy.

In the very beginning at the hotel go to Sophias room in room 103 then go to her garbage can. An extra scene will go on.

After arriving at Moonbase, you will find Peppita. After the cutscene, go up the elevator. There are 2 exits to the immediate left and right of you. Take the one with Ursus first. Go past the central area and the two flying bots to the opposite exit. Before you get on the path, make sure you are healed. After defeating the Proclaimer, Peppita will join you. Now head back to where you started. Head to the other exit and there will be a door right before you get to the circus leader. Go in there and you should be in the bar. After another cutscene, the bartender will unlock the storage room for you. Open the chest in the bar for 32,000 Fol, then head to the storage room. You will obtain Battle Armor, Ablative Shield, Runic Cloak, and some shoes for Peppita.

Power Up Your Weapons

Find and sign the inventors Misty Lear and Mackwell. Sign Misty (Mountains of Barr) with a Spirit Stone (Ruins of Barr). Sign Mackwell (Castle Aquaria-Library) with the Book of Prophecies 1(Shrine of Kaddan; you have to disintegrate a wall). Once signed, team them with Maria at a workshop. You can then invent a Damask(+100 Attack) at a cost in the 1300s range. Every now and then, you can also invent a Diamond(+50 Defense) around the 1100-1200 range. Synthesize these to your weapons to power them up.

After defeating the Dragon Zombie in the Mountains of Barr, you will obtain a dragon bone. Take this to the workshop in the mountains, and you will make a Dragon Whistle. This will open the door to the Ruins of Barr. There are 4 differnt sounds to the whistle, which will open each of the 4 differnt doors with dragons on them. If you play the wrong sound, you will have to fight a dragon. Tap lightly for a Happy dragon, tap hard for Sad, hold lightly for Angry, and hold hard for Playful.

Go to the temple in Castle Aquaria to open the path to the Shrine of Kaddan. Talk to one of the women there, and she will give you some disintegration hammers. If she is not there, go in, and then come back out. You will need these to make it through. If you run out, a rabbit is selling more inside. Once inside the Shrine, you will come across a seemingly invincible enemy(the purple thing right after the save icon). You will need to create a Saint's Amulet with three Saint's Stones in the Workshop inside the Shrine. And *Note* that after you defeat the Vendeeni at the Sacred Orb, there will be no enemies inside the Shrine, giving you freedom to explore.

After Maria joins your party, head to this optional area. In the area between Peterny and Aquios, you will see a bridge leading to another area. There, you will see a Save Icon next to some stairs heading down. This is the Aquatic Gardens. If you are not strong enough just come back later. Inside, you will find a Holy Sword for Fayt. And after you defeat the boss, open the chest to get the special item Paracelsus's Table. Take this to Welch at the Craftsman's Guild, and you will unlock the Fighting Mode.

After Albel joins your party, go talk to Woltar at his manor in Kirlsa. He's in the middle room on the second floor. After a cutscene, you will get the Blades of Ryusen, some nice weapons for Nel.

When you try to invent an item yourself, always save your game first. This way, if you don't invent anything good after spending a lot of Fol, you can just reload. Also, if you have signed inventors, and they are currently working, put them all on standby before you start inventing, so they don't use up your Fol while you are working. And lastly, if another inventor creates something, they will then sell it at the shops for high prices most of the time. Unless you absolutely have to, don't pay for them. Most likely, you can make it yourself for a lot cheaper.

After beating the game it will be saved as “clear”. Loading this game will take you to the Spiral Tower save point before the boss battle. Go down the stairs and talk to the bunny character to travel to the Fire Wall, the Ruins of Mosel or Surferio. The bonus dungeons include the Aquatic Gardens of Surferio, Maze of Tribulations, and the Urssa Cave Temple.

When you beat Gabriel Celesta in Cave of Trials, you can go above Floor 100 in Sphere Company 211. As the name implies, It has 211 Floors. Valkyrie awaits you at Floor 210 while Iseria Queen is at the Last Floor.

Have Roger join your party either as the 5th or 6th character and when you meet Lenneth Valkyrie at Floor 210 at Sphere 211, an extra scene will triggers.

Go into battle with the Gutsy Bunny equipped, then deequip it immediately. Enemies with 100,000 MP or more have their max MP reset at 99,999, making them much easier to kill with MP damage.

With Fate, Cliff, Maria, Roger, or Nel, run to the edge of the screen, then continuously step (hop) into the edge. You will be invincible to nearly all attacks with the exception of Heraldry.

Finish 30% or more of the Battle Collection to unlock additional difficulty settings.

As the Battle Collection is completed, additional difficulty settings will be unlocked.

Successfully complete the game to unlock a ten level bonus dungeon with a Boss in each level.

We have no unlockables for Star Ocean: Till the End of Time yet. If you have any unlockables please submit them.

We have no easter eggs for Star Ocean: Till the End of Time yet. If you have any unlockables please submit them.

We have no glitches for Star Ocean: Till the End of Time yet. If you have any unlockables please submit them.

We have no guides or FAQs for Star Ocean: Till the End of Time yet. If you have any unlockables please submit them.

Submit a cheat for Star Ocean: Till the End of Time