Use the above links or scroll down see all to the PlayStation 2 cheats we have available for Star Wars: Battlefront. 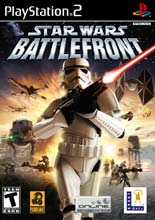 How To Deactivate A Droideka Shield

In any level with the clone war play as the clones and chose the guy with the jet pack, chose the emp gun (the first gun you start with as the jet pack man) and fire at a Droideka with its shield up and its sheild should be deactivated.

Easy Way To Be A Droidika

Find an area with lots of guys to shoot at, unroll, shoot as many guys as possible, and don't put up your sheild unless you are being shot at or you see a missle or grenade comming at you. Onve your sheild run out, roll into a ball and run away from the battle, then, if needed, find a health droid to reheal yourself.

When you have four blue dots at the upper right hand side of the screen you will be able to select one rebel planet to destroy. (go after the planet you have the most trouble conquering) it will show you the part from star wars 4 where the death star blow the heck out of Leia's home planet.

Good Way To Kill A Droideka

An easy way to kill a driodeka is when it is shooting at another clone run up to its shield till you can't go forwards any more he then can't shoot you unless you move away. Then when its shield goes down shoot it. (Does NOT work on Battle Front II).

All right. Well, I discovered this trick with my friend. MAKE SURE THAT THE INSTANT ACTION HEROES IS SET ON FROM THE OPTIONS SCREEN OR THIS WILL NOT WORK. First, go to the instant action area and select the Bespin: Platforms area. Next, when the level starts choose the CIS side. Choose the Super Battle Droid and find the Jedi. After you find him, aim at his feet and shoot a rocket at him. Keep doing this until he falls off of the platform.

In the first mission of the clone wars historical campain, and you are the CIS, get into one of the AATs. You see that the Gungans have a shield up around them. Even though its up, you can drive though it. Once you're in, shoot the big dino things. Let your other troops get the other CPs. Once that's done, kill all of the remaining Gungans and take the last CP.

You can push people, so why not droidekas? You can push them, so to stop them shooting at you just keep running toward them. If there is 2 of them or more, take cover behind one of them (still running toward it of course) and wait for the other(s) to shoot his own teammate. When the shield goes down, blow him up mate!

If you are the CIS on Polis Massa yiou can go outside the airlock or forcefield and not die like the Clones, Rebels, and Empire. Remeber this level is only on StarWars Battlefront 2.

A good way to sneek up on the Palace Surounded by water is to get a vehicle and be a Dark Tropper or a Jet Clone Trooper and drive the vehicle on the water behind the Palace and exit the vehicle. You won't fall in the water, at least I haven't yet, but you should end up on top of the vehicle. When outside wait for the area to clear of enemy troops and then fly up. You will be right at the capture point.

On Geinosis or any of the Levels were you are or want to be CIS, a good way to take out those pesky AT-At's is to be an Assault Droid and lay a row of mines right in front of the AT-ATs. Make sure that the AT-AT's legs line up in the path of the mines. Two hits in the legs should do it. And for a little more Insurance use up your rockets on them too.

How To Destroy The Droidekas

Go close to the droideka and when the shield is down you can shoot it. When there are two droidekas, get close to one of them and stay behind him and the 2nd droideka will shoot his own teammate. Shoot the 2nd doideka when the 1st one goes down. Also, throw many grenades and shoot your launcher missile on the jet trooper.

If the other team has Jedi Hero say on the level in Bespin (platforms) and you want to Defeat that Jedi then be any charcter with granades. Get the jedi to come toward the edge then through a granade at the jedi to bomb him off the edge of the platforms.

When on a level with clones, like the Platforms on Bespin, be in a Separitist Fighter and shoot a clone fighter, Gunships work best, and when it is lowing low on health go near it and blow it up. You will hear the clones screaming. (P.S You must be at top speed while doing this.)

To see yourself hold a bomb, throw the bomb with L1 and hold it. When you reload, you should be holding a bomb in your hand. To use the bomb, you have to let go and press L1 again.

When you use a blaster rifle, as your ammo depletes, the accuracy of each shot goes down dramatically. When you have full ammo, and you aim at an opponent, it will almost always be a direct hit. Get close, or use your aim/zoom to land a head shot. That should be enough to take down the enemy. Reload as mush as possible, and your shots will almost always be a direct hit on the enemy.

To destroy the endor sheild Bunker when you choose the Reebles team. Choose the Wookie smuggler as your player, Then, spawn at the rebel Out post grab a speeder bike and zoom down the clear path through the hollow log in the middle of the forest find a clearing this leads to the barracks go through the Barracks watch out for AT-ST's zoom to the Sheild bunker get as close as you can jump off the speeder bike and run inside ignore the turrent and blaster fire once inside use the time bombs and place them on the control consle one at a time next use the grenade launcher fire in the corner near to the genoraters kill off any imperial pilots who come into the bunker with the crossbow use the cross bow onthe consle too. if you run out of ammo or get low on reinforcements restart the mission and do this all over again until the sheild bunker blows up.

If you want to beat the Galactic Conquest easily, then you will first need to conquer the planet Bespine. Trust me, I know all of the levels. Then from there, you can take over the planet Naboo. You'll need that planet for all the battle areas that don't have vehicles in them. Do this, and beating the Galactic conquest should be very easy.

When you are on the final planet in the forest the best way to win would be to go around the edge of the forest. You will end up behind the enemy's base. There you can snipe your way inside.

So. Having trouble knocking out those droidekas? Try hiding behind cover, then use grenades or missile launchers to bring down their shields. The droideka shield weakens with every hit. Then you can blow them up. Without their sheilds, they weak.

Killing a jedi is difficult right. Well here's an easier way. Ok get a ship that can fly or hover and follow the jedi untill he stands still. When he stands still land on him or run him over. He will respawn. Do this as meany times as needed. Note: you probibly wont get a jedi every time you do a level. Also, Runnig the jedi over will take longer and it will be harder to. Its alot easier to land on him.

Create a new player called Jubjub and all people will be the size of ewoks.

Go to "Historical Campaign" mode (in single player). Select the Era you want to play (Clone Wars or Galactic Civil War). You should now be on the Planet Selection screen. Press Square, Circle, Square, Circle. You can now scroll Left/right through all of the planets!

We have no unlockables for Star Wars: Battlefront yet. If you have any unlockables please submit them.

We have no easter eggs for Star Wars: Battlefront yet. If you have any unlockables please submit them.

We have no glitches for Star Wars: Battlefront yet. If you have any unlockables please submit them.

Strategies for all planets

The Online War of the Dark and Light Side