Use the above links or scroll down see all to the Xbox cheats we have available for Star Wars: Battlefront. 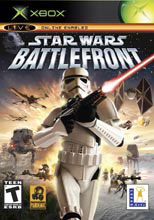 Pick a planet to go battle on. When your done press X to go to character settings. Then pick any Jedi you want to be like Darth Vader.

Find a set of stairs and climb them but have a sniper or any kind but sniper works best for this. Jump from building to building and duck low and snipe head shots for faster kills. You can do that and ambush them, but watch out if you miss you'll start a riot of lasers firing at you.

Choose sniper class in historical campain when on naboo. Hide either on the balconies or behinde objects. My advice is balconies. Snipe enemies from balconies, and when your in the open run from side to side very fast and either use the pistol or sniper my recommendation is the sniper. Shoot at head level for easy kills.

Hidden In The Walls

In the level where your on the floating things above the ocean sea type thing if you walk into the building from the right side and go to the ammo replenisher and jump on it then crouch and walk into the wall then you can shoot people through the wall and they can't do anything to you. WORD OF CAUTION: Don't walk to far out into the water bheind you or you die.

First play on Tatooine dune sea. Be the empire. Then capture the tusken raider camp and be the sniper. If you shoot one rebel near a group of other rebels they will all run away except for a few. Continue the process to scare them all away. Your only threat is the tusken raiders.

A Driodeka is usually difficult to defeat with its shields up. If one is rolling, run directly next to it. When it puts its shields up, stand in front of it, almost in the shield. The way the blasters are set up, the game glitches and will not let it shoot you because you are between them. This also works with the shields off.

Stand, crouch, or lay near any one of the replenishment depots. Camp there with a sniper rifle and keep firing. You could do this with any character but the sniper is more effective.

Tired of those stupid gnats that fly around you while your in the AT-AT? Then take your AT-AT to the echo base(after stopping briefly to destroy the shield generator) and conquere it. Then take a battalion of troops through the tunnels to get lots of command posts.

How To Kill A Jedi

To Kill a Jedi such as Luke Skywalker, Mace Windu, Count Duku, or Darth Vader you have to do 1 of theese 2 things. You either have to take a Spaceship like the X-Wing or something else and land on the Jedi Heroe. The other option is to take a Motor Bike (the ones that hover) and run into the Jedi as fast as you can. It might take a few tries but I works.

To enter codes, pause the game, then hold down both triggers and enter the following B, B, Y, B, A, White, Black, Black, Y.

Enter Jub Jub as a case-sensitive profile name. All models in the game will now use the Ewok skeleton and turn the game into "Baby Wars". Infantry units will be half their normal size, and their head seems to be much closer to their shoulders. Note: First person view remains the same height.

Go to "Historical Campaign" mode and select the era you want to play (Clone Wars or Galactic Civil War), then enter the following X, Y, X, Y in that order.

We have no unlockables for Star Wars: Battlefront yet. If you have any unlockables please submit them.

We have no easter eggs for Star Wars: Battlefront yet. If you have any unlockables please submit them.

We have no glitches for Star Wars: Battlefront yet. If you have any unlockables please submit them.

We have no guides or FAQs for Star Wars: Battlefront yet. If you have any unlockables please submit them.