Use the above links or scroll down see all to the Nintendo DS cheats we have available for Star Wars Episode III: Revenge of the Sith. 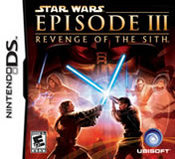 On both Anakin's and Obi-Wans storylines, there is a mission where you must last 2:00 until the Clones arrive. To complete those missions easier, go up and down on the screen while jumping. The most they will hit you is four times.

When fighting a Jedi, wait for his special attack then block it (press L). After this is done, attack him as hard you can.

Stand at the bottom of the screen. When it flies over you, use your lightsaber to slash upwards, then move upwards to avoid the bombs. When it flies over the ground, jump over it and use a jump attack to damage it. Walk back to the bottom of the screen. Repeat this until it becomes a walker. Then, jump over the laser beam and use jump attacks to damage the head. You should be able to defeat it without taking any damage. Note: do not try to Force Push/Pull the bombs towards the ship -- it will not work.

In Anakin's story mode in the Utapau System, instead of fighting all of the bodyguards with staffs, ignore the yellow ones and take out the red ones. This will cause the others to retreat.

You can heal yourself when you get the attack "Press R + B". Upgrade the Heal to level 3; it is well worth it.

In Multiplayer mode go to skirmish. You can do any map but the time limit has to be 10, the frag limit has to be 5, and respawn must be on. You can have any vehicle. You must be doing a 1 on 1 dogfight with any computer such as Boba Fett, Han Solo, Luke Skywalker or any other of thoose famous star wars characters. Then if you win the battle you will unlock thier ship.

We have no cheats or codes for Star Wars Episode III: Revenge of the Sith yet. If you have any unlockables please submit them.

We have no easter eggs for Star Wars Episode III: Revenge of the Sith yet. If you have any unlockables please submit them.

We have no glitches for Star Wars Episode III: Revenge of the Sith yet. If you have any unlockables please submit them.

Submit a cheat for Star Wars Episode III: Revenge of the Sith