Use the above links or scroll down see all to the Xbox cheats we have available for Star Wars Knights of the Old Republic II: The Sith Lords. 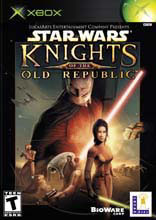 See Through Clothes On Nar Shaddaa

When on Nar Shadaa you will get the dancers outfit. Put on the outfit, then use Force Sight in first person mode with Kreia. You will be able to see through the outfit.

In Freedon Nadd's tomb there are two rooms containing boxes which may only be opened by a computer terminal. The first box gives you the choices of A) feb, B) dce, C) eba, D) fac, E) fdc, F) acd. The terminal asks you to choose which of these has an error and the correct choice is "C".
The second box the computer terminal gives you an equation to solve (6_2)_8_9_1=13. The answer to this question is (6*2)-8+9*1=13. If you remember your order of operations from grade school, this should be easy!

On Korriban, Shyrak cave, is a room with a dead jedi in the center. Open and take all, and two Hississ will appear. Open the dead jedi about 20 or 25 times and the room will fill with hississ. Use Force storm until your force is down to at least 20 then use master drain force to refill your force meter and use force storm again. Repeat as needed.

(you will need atleast 500 components and be able to make a long sword or vibroblade) The first time you get to telos ur trapped but if you keep playing you will be able to get the the 081 entertanment place when there got to the twins shop before the cantina there there is a workbenchuse it and make or breakdown equipment then make longswords or vibro blades, next exit the workbench and sell one of the twins. And there you go fast money.

When you find a good lightsaber crystal like ultima pearl, or upari, equip it to Visas lightsaber then duplicate it by changing the color crystal, equipping exit workbench, then upgrade it again but only select the color crystal then equip. I find it works best on the Ebon Hawk then exit the ship so the game loads, reenter and repeat. You can now upgrade new lightsabers and remove the choice lightsaber crystal and equip it in the bottom slot of your lightsaber. Exit workbench then upgrade again this time put the same crystal in the top slot and equip. Select to upgrade again and put your custom crystal in the bottom slot. If you used the ultima pearl, it will have a +11 attack modifier.

[You have to be a Jedi Consular, know lightning and alot of medpacs or heal] if you keep using lightning it won't work. What you do is use "Force Affinity" and all your force is increased bigtime. When you attack he counters it so hide use a life support pack [he must be badly damaged and befoe he uses heal] then use force affinity then lightning 1 or 2 times. He should die and when you pick up his remains he will have Jedi master robes and something else.

[you need to be a female] go to the Dantooine ruins and you a guy named Mical but his name if clicked on he is "Disciple". To turn him dark you have to be dark. When you talk to him say light side things and he will start turning dark. [NOTE:IT IS HARDER TO GET HIM TO JEDI. ].

Force Healing can be used as an attack. First use Force Heal then quickly use any attack (attack, critical attack, flurry attack, power attack)and repeat if done right you will heal and it will hurt your enemy and if you keep using this technique your force points will not even decrease it will stay the same. It is a good way to defeat difficult enemies.

The first thing you need to do is perform the Duplicating Lightsabers hint at the top of this page. When you finish doing that, go to any store and sell your new (or old) lightsabers for around 430 credits (different price at different stores). Do this whenever you find yourself short of credits.

When you're fighting the tank droid on telos in the military compound, run to the door that you came through when you the first time you entered the hanger. The tank droid will not be able to go through it. Although he still can shoot you so go behind one of the walls. Then throw all of you're sonic grenades at it. That is its weakness. Sonic grenades come first. Then you can throw ion grenades. For me it took 12 sonic grenades and a couple of hits with my vibrosword.

When your Force points are low and you need them to regenerate quickly, just play a game of Pazzak. Once you are done, they will be fully regenerated. This is a good reason to take Atton with you everywhere.

This trick requires that your character is male, have The Handmaiden, and have decent influence with her. Once you get to the second dueling chance, go off ship with her. Equip her with whatever you want to duplicate. Then, go back on the ship. Enter into a duel with her (the second duel). You will automatically have your armor taken off. Just before the targeting reticule turns red, pause the game. Then, go to the equip screen and put on whatever armor you want on her and yourself. The game will take you out of the duel, but you will stay in battle against The Handmaiden. Kill her (do not worry about doing this). You can then loot all the equipment she had on her. Exit the ship. Return back to the cargo hold and she will be there again, with whatever you had on her originally. Note: Sometimes the secondary weapons will also be duplicated; make sure to equip something in them as well. Sometimes her will get down to 1 HP yet will not die. In this case, just exit the ship with her. Heal her outside then head back in. Also, if you want to duplicate lightsabers you must have her as a Jedi first. Additionally, on the Harbringer, just before Kreia is about to fight Sion, equip her with the best items that you have (weapons only). After she loses her hand, you will have duplicates of the item.

Run With Force Speed Without The Blur

Have Kreia in the third slot (or second if it is only you and her). If you have someone else and she is in the second slot, you just be a little faster. Tell her to do Force Run and quickly tap Black to switch back to your character. You should Force Run without the blur.

Use the following trick when in a swoop race and you need to beat a good time. When you are about to hit a wall, pause game play directly in front of the wall or other object. Quit the race. At this time your swoop bike should keep moving, hit the wall, and the timer should continue. When you talk to the race person, he should say you won with a low time. If it did not work. try to get closer to the wall. This should be done at a point before the time you have to beat, or near the beginning of the race.

We have no unlockables for Star Wars Knights of the Old Republic II: The Sith Lords yet. If you have any unlockables please submit them.

We have no easter eggs for Star Wars Knights of the Old Republic II: The Sith Lords yet. If you have any unlockables please submit them.

We have no glitches for Star Wars Knights of the Old Republic II: The Sith Lords yet. If you have any unlockables please submit them.

Submit a cheat for Star Wars Knights of the Old Republic II: The Sith Lords