Use the above links or scroll down see all to the PlayStation 2 cheats we have available for Star Wars: The Force Unleashed. 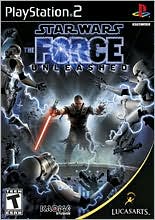 You can use jedi Holocrons to find artwork and sometimes ceats throughout the game, you can find Holocroms by destroying stuff, going to hidden areas, etc. You can get a Hlocron by just walking through it. It will display the # of Holocrons you have out of how many there are in the game, which is 200. Holocrons are in every level, including the prologue.

How To Defeat Rahm Kota

Rahm Kota is a tough old man, but you're gonna put him out of his misery anyway. First, I would suggest jumping around like a maniac and attack him every 5 mins. If you don't wanna do that, lock onto him, and unleash the full power of the dark side on him. If you get into a lightsaber battle, if you overpower him, electrocute him so he'll know who he's dealing with. Every once in a while I'd suggest running off to get health, because it'll take awhile to kill him. Use the saber throw for long-distance attacks, and repulse or whatever it is to cause an earthquake on Kota. And if it works, throw stuff at him. Follow this, and he'll be blind in floating out into space in no time.

When facing a enemy who has a lightsaber it can be hard to hit them with your lightsaber. When you are in a saberlock or a forcelock tap the buttons on the screen over and over. Pay attention because sometimes they will change. Once you win the saber/force lock your opponent will be stunned. Use the force sprint (R1) and attack them then quickly press square. Do this over and over and you will beat bad guys quickly.

Enter VERGENCE as a code.

Enter CORTOSIS at Extras screen in the ship, and you will be invincible!

To unlock the 501st, enter LEGION as a cheat code.

Enter SITHLORD in the cheats menu and you unlock darth vader.

In the Rogue Shadow, go to Extras and enter HOLOCRON. It will give you the Sith Robes.

In the Rogue Shadow, go to Extras and enter TYRANUS as a code.

Inside the rouge shadow, go to the cheat code menu and enter KATARN.

Inside the rouge shadow, go to the cheat code menu and enter HIDDENFEAR.

Inside the rouge shadow, go to the cheat codes menu and enter STORMTROOP.

In the rouge shadow, enter DREXLROOSH at the cheat codes menu.

Inside the rouge shadow, go to extras and enter ECLIPSE at the cheat code menu.

Play As A Sith Stalker

Enter "JEDIMASTER" in the cheat codes section on the rogue shadow,and you should have unlocked mace windu.

Go to Extras, and enter Speeder as a code.

Go to Extras, and enter Grandmoff as a code.

Go to Extras, and enter Lightsaber as a code.

Go to Extras, and enter Inthedark as a code.

Enter wookie on the rogue shadow in extras.

After you defeat the rouge Jedi the second time, you will be able to upgrade your force powers to a higher level.

Successfully complete the game with the Jedi ending to unlock the Jedi robe.

Successfully complete the game to unlock the Sith Lord difficulty.

We have no easter eggs for Star Wars: The Force Unleashed yet. If you have any unlockables please submit them.

We have no glitches for Star Wars: The Force Unleashed yet. If you have any unlockables please submit them.

We have no guides or FAQs for Star Wars: The Force Unleashed yet. If you have any unlockables please submit them.

Submit a cheat for Star Wars: The Force Unleashed